After the loss of Soleimani and Muhandis, Iran is struggling to reorganize and reunite different PMU factions that previously operated under the guidance of Soleimani on behalf of Iran’s interests in Iraq. 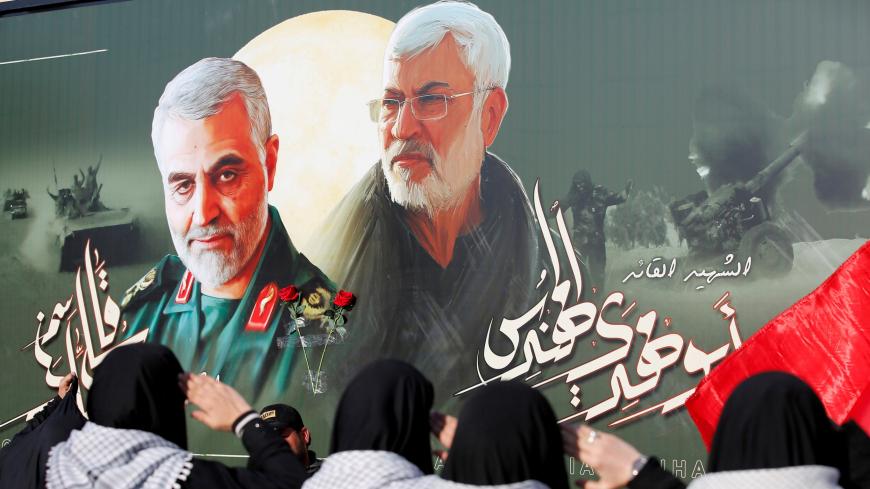 BAGHDAD — Iranian top commander Qasem Soleimani and his right-hand man Abu Mahdi al-Muhandis were the prayer-beads thread of the Iraqi Popular Mobilization Units (PMU). When they were killed by a US drone strike Jan. 3, the thread was ripped and the PMU factions were scattered. Iran is now struggling to reorganize the military network in order to maintain its power in the first and most important station of its regional network along the Shiite crescent.

The PMU announced Feb. 20 the appointment of Abu Fadak al-Mohammadawi to Muhandis' position as the PMU's chief of staff. Mohammadawi is a former military leader in Kataib Hezbollah who left the PMU a few years ago due to disagreement with other leaders.

Muhandis had become the PMU’s chief of staff a few months before his assassination. He also served as the deputy head of the organization since its establishment in 2014; now, Abu Ali al-Basri has been named deputy head. The PMU is trying to get approval of these designations from caretaker prime minister Adel Abdul Mahdi, who remains in office until the prime minister-designate forms his Cabinet and is approved by parliament.

Four PMU factions known to be close to top Shiite cleric Ayatollah Ali al-Sistani have expressed their objection to Mohammadawi's appointment, calling upon all PMU factions to integrate into state forces under the command of the prime minister as commander in chief of the armed forces. They are the Al-Abbas combat division, the Ali Akbar Brigade, the Imam Ali Division and the Ansar Marhaia Brigade.

This is an indicator of the fragmentation that has taken place in the PMU following the deaths of Soleimani and Muhandis.

Now the question is whether these moves can return the PMU to the where it is again united under one umbrella dominated by Iran.

The PMU is made up of about 70 militias, which were brought under the PMU umbrella in 2014 by then-Prime Minister Nouri al-Maliki, with direct Iranian support, in order to fight back against the Islamic State, which has taken over vast areas of Iraq. The entire PMU was under the influence of Soleimani.

Because of the sectarianism that has been prevalent in the PMU and because many militias have fought outside Iran, the PMU has been the center of controversy since its creation among the Iraqi public. The PMU is now under greater scrutiny amid the loss of its unifying leader and the Iraqi protests that began in October; many protesters are opposed to Iranian influence in Iraq.

Iran, which has been a big PMU benefactor, has used the PMU as a powerful instrument for maintaining Iran’s influence in the Shiite Crescent. Iran is now working to develop and implement strategies to reunite the organization; chief among these has been the search for a common leader, who has to meet a series of requirements that make it an almost impossible mission for Iran.

Although Iranian Supreme Leader Ayatollah Ali Khamenei immediately announced Brig. Gen. Esmail Ghaani as Soleimani’s successor to lead the Quds Force, Ghaani does not have the diplomatic charisma and networks to be an effective leader of the PMU. Due to the recent anti-Iranian sentiment arising from the recent protests in Lebanon and Iraq, Iran realizes the new PMU leader must be an extremely loyal Arab who can disguise Iran’s shadow influence among the Iraqi public.

Muqtada al-Sadr was invited Jan. 13 to a meeting in Qom that was also attended by Sadr’s rivals in the PMU organization in the hopes that Sadr might crack down on the protest movement and even eventually become the de facto leader of the PMU. Following the meeting, Sadr called for a million-man march against the US presence in Iraq, which was welcomed widely by all other PMU factions despite the strong disagreements between them. However, Baghdad’s Tahrir Square protesters rejected Sadr’s call to participate in the march. Soon after, Sadr stepped forward in leading the PMU in cracking down on the protests in Baghdad and Najaf, which resulted in the killing of nearly a dozen protesters. This raised strong criticism against him and even led Sistani to take action against Sadr, leading Sadr to withdraw his people from the protest squarers. Following these events, Sadr’s popularity among Iraqis declined, eliminating him from Iran’s list of possible PMU leader.

Another option for Iran is giving the lead to Hezbollah, which has been Iran's strongest regional ally for years, fighting on behalf of Tehran in Lebanon and Syria and helping the Iraqi PMU and Yemeni Houthis. Reuters published a report Feb. 12 indicating that Hezbollah was called immediately after Soleimani's death to play a key role in leading the PMU.

Al-Monitor had learned from a senior military source who asked to remain anonymous that senior Hezbollah cleric Muhammad Kawtharani has been visiting Iraq on a regular basis, meeting with various PMU factions in order to build coordination network between them and avoid disagreements that could affect the unity of the already fragmented organization. The source told Al-Monitor that Iran assigned Kawtharani to guide Iraqi militias until Iran chose a permanent successor to fulfill Soleimani's role working with the PMUs in Iraq.

Although Kawtharani was raised in Iraq and did his seminary studies in Najaf (where he was born) and is known and is respected by the militia groups, he will have great challenges when it comes to commanding PMU leaders. For now, the militia leaders are cooperating with Kawtharani due to pressure from Tehran. Iran might also rely on Hezbollah leader Hassan Nasrallah, a Lebanese cleric respected by many Iraqis; however, Nasrallah’s inability to travel to Iraq greatly limits this option.

Nujaba announced Feb. 16, in conjunction with the recent attack on the US Embassy in Baghdad, that it has started the countdown to take action against US troops in Iraq. Nasrallah had asked the PMU to avenge Muhandis' killing a few hours before Nujaba's warning.

Meanwhile, some prominent PMU leaders are also competing over the organization's leadership. Kaabi, Kataib Sayyid al-Shuhada leader Abu Alaa al-Walai and the Badr organization’s Hadi al-Amiri have been traveling to Tehran to attend meetings with commanders of Iran’s Islamic Revolutionary Guard Corps (IRGC) and other senior leaders to gain their trust and support.

Michael Knights, a senior fellow at the Washington Institute for Near East Policy, told Al-Monitor, “Iran will likely split up the portfolio that Soleimani controlled. The IRGC Quds Force and Ministry of Intelligence will share duties to a greater extent in Iraq. Within the IRGC, Soleimani’s role will split between Quds Force commander Esmail Ghaani, his deputy Mohammad Hejazi and Iranian Ambassador to Iraq Iraj Masjedi.”

The above indicates that it will be difficult for Iran, if not impossible, to find fitting replacements for Soleimani and Muhandis. Soleimani and Muhandis were the backbones of the PMU, uniting multiple factions under one umbrella. These factions were established at different times and circumstances and do not share the same goals and ideology, not to mention the great disputes between them over economic interests in Iraq. In fact, Soleimani and Muhandis were responsible for uniting them all together. While Soleimani spoke modest Arabic, Muhandis spoke fluent Persian and was extremely dedicated to the ideology of velayat e-faqih [clerical rule by Khamenei] and in many interviews, he described his relationship with Soleimani as being only a soldier for the Quds Force leader.

“It will be very difficult to re-create the mutually supporting power base of Soleimani and Muhandis, which was a powerful double act. The PMU is unlikely to unite under a second-tier player like Abu Ali al-Basri, a Badr official who is making a play to become a new chief of staff with many of Muhandis’ powers,” Knights said before Basri was named deputy chief of the PMU.

Due to the current circumstances, the PMU will face great challenges in the near future in recovering from the loss of its leader, putting Iran in a very difficult position amid the ongoing protests and continuing political crisis. 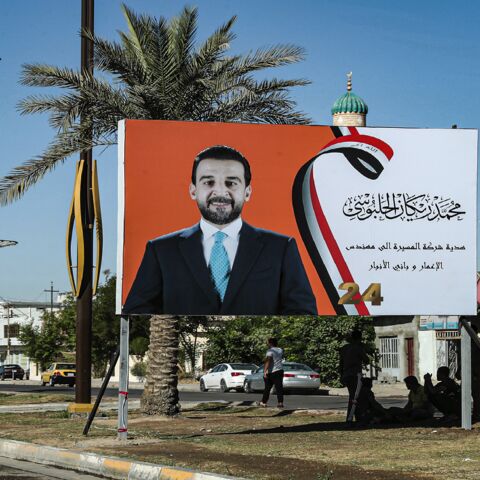 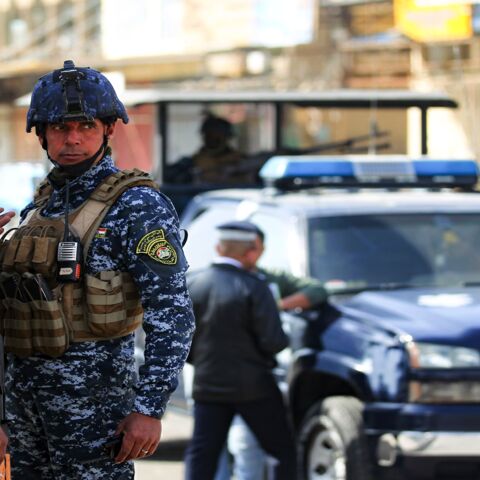 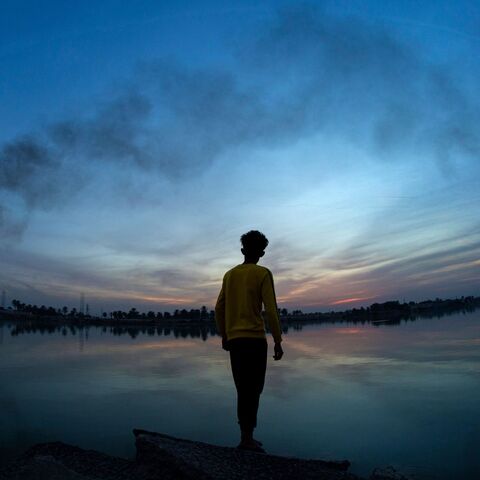