What's in store for Iraq's PMU after death of top commander?

The Popular Mobilization Units will face fragmentation and division after the assassination of Abu Mahdi al-Muhandis, who was the backbone of the Iran-backed organization. 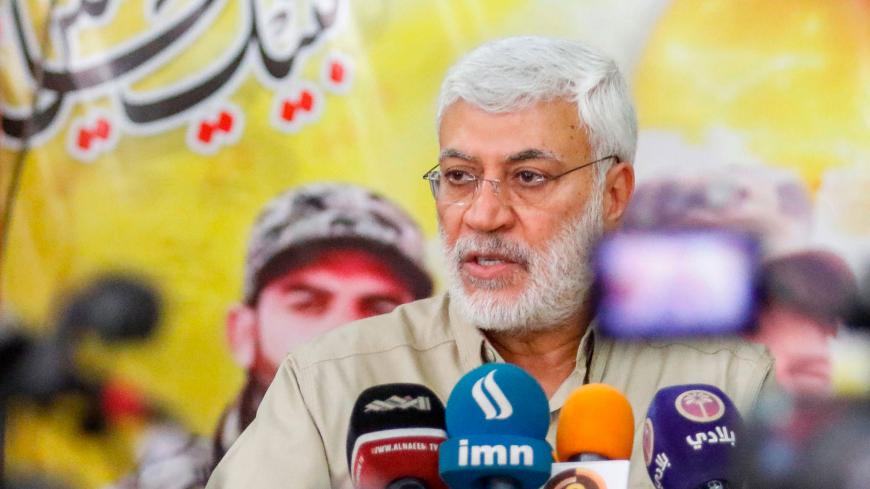 Abu Mahdi al-Muhandis, the No. 2 in Iraq's Hashid Shaabi, known in English as the Popular Mobilization Units, holds a press conference during a visit to the southern city of Basra, Iraq, Jan. 23, 2018. - HAIDAR MOHAMMED ALI/AFP via Getty Images

Shiite populist cleric Muqtada al-Sadr seems to be ambling for the lead of Popular Mobilization Units (PMU) factions in the absence of its deputy head, Abu Mahdi al-Muhandis, who — according to Washington Institute researcher Michael Knights — was “the first archenemy of the United States.”

On Jan. 17, Sadr called on all factions to form mass protests against what he called the US occupation; they all responded to his request.

On the other hand, Hadi al-Ameri, head of the Badr Organization, is setting up meetings in both Baghdad and Tehran with faction leaders to unify their discourse — this raises the possibility of his nomination for a leadership position in the PMU in the future.

The PMU in Iraq has lost strength since the United States assassinated Muhandis along with Maj. Gen. Qasem Soleimani, head of the Islamic Revolutionary Guard Corps' (IRGC) Quds Force, upon their exit from Baghdad International Airport on Jan. 3.

Muhandis, born in Basra governorate in southern Iraq in 1953, was associated with military action against the Saddam Hussein regime in the 1980s. He was considered one of the leaders of the Badr Organization at the time when he joined it.

The United States imposed sanctions on Muhandis in 2009, and he was the most prominent field commander for the attack on the US Embassy in Baghdad on Dec. 31, 2019.

On Jan. 10, PMU operations leaders met in Baghdad and stressed that “Muhandis’ death will give moral impetus to the PMU fighters to stand on the front lines and defend Iraq,” but their statement did not refer to any information or plans after his absence.

Yazan al-Jobouri, one of the PMU leaders told Al-Monitor, “Chaos and confusion prevail within the PMU today; its leaders and factions did not meet until a week after Muhandis’ killing. His absence will have a major impact since he is the only one [with] whom the entire PMU agrees and everyone obeys him given his long jihad history.”

Several questions arise regarding the PMU’s post-Muhandis future, mainly revolving around whether the PMU is facing internal division and if even more challenges await.

In this regard, Ihsan al-Shammari, a political science professor at Baghdad University, told Al-Monitor, “Muhandis’ killing constitutes a strong blow to the PMU because he was a field commander and a spiritual father for the factions. He was the first concerned with every detail within the PMU. There were differences even before his death, so one can only wonder what could happen after.”

He added, “We will notice the depth of differences during the coming days because there are leaders in the PMU that believe they have the right to play a greater role at the level of both the leadership and the armed factions, and this may put the PMU’s future at stake.”

According to Shammari, the IRGC, which has had positive ties with PMU leaders, may succeed in controlling the rhythm of these differences as they did in earlier times.

When the Islamic State invaded Mosul on June 10, 2014, Muhandis gathered the armed Shiite factions, organized their actions based on Grand Shiite Ayatollah Ali al-Sistani's fatwa and led the battles against the terrorist group.

Although Muhandis was deputy head of the PMU, up until his assassination he was its de facto and field leader, which created disputes with PMU head Faleh al-Fayadh on an ongoing basis.

Muhandis’ opinion was heard among factions — especially those that follow Wilayat al-Faqih — so he was the PMU’s beating heart.

Professor of political science at Baghdad University Adel Badawi told Al-Monitor, “The PMU’s post-Muhandis future seems to be heading toward weakness due to the competition between many factions to reach leadership positions; Muhandis represented the central leadership that curbed this competition.”

Muhandis’ killing was a shock to the PMU, which he built, structured and knew every detail about over the past five years. Even the armed factions not affiliated with the PMU, such as Hezbollah Brigades and Harakat Hezbollah al-Nujaba, were affected by the loss of what Muhandis symbolized.

Maan al-Jubouri, former adviser at the Iraqi Ministry of Defense, said, “The PMU’s loss affects its unity, weakens its power and fuels competition between a large number of its leaders. Several demands for leadership will emerge within the PMU. Consequently, its strength will diminish; some will leave the scene and others will hesitate. Internal conflicts will break out between the leaderships on the one hand and the factions on the other.”

Soleimani was the other person to manage the balances between the PMU and the resistance factions, but he too is no longer alive. The PMU and the factions have endured a major loss with the assassination of two jihad leaders who had great influence and were able to unify the discourse of the resistance.

At the end of the day, the PMU will not be the same coherent, strong, ideology-driven PMU after the loss of Muhandis. Rather, it will witness major differences that may or may not be made public, but they will affect it greatly — especially since those to whom the factions and their leaders resorted to resolve the disputes are now gone.