Disagreements among PMU leaders stir up conflict between factions

Popular Mobilization Units factions are divided over how to deal with protests, as some take stances against the demonstrations while others offer protection to protesters. 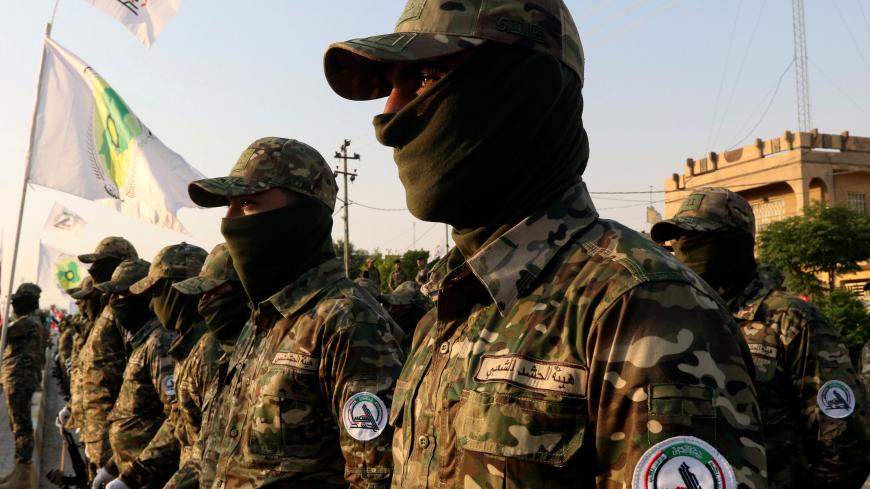 Members of Iraqi Popular Mobilization Units take part in a military parade in the town of Taza, south of the northern oil city of Kirkuk, Iraq, June 28, 2019. - REUTERS/Ako Rasheed

The Sairoon Alliance, headed by Sadrist movement leader Muqtada al-Sadr, demanded Dec. 9 that the Popular Mobilization Units (PMU) be kept away from political conflicts. “The PMU needs to be isolated and remain independent from psychological disorders and partisan conflicts," Sairoon Alliance deputy Ali Ghawi said. He said that some PMU leaders should be replaced with more effective and patriotic ones and that "all forms of corruption need to be eliminated from within.”

A Dec. 6 incident where gunmen attacked protesters at a square near the Al-Sink Bridge near Tahrir Square in central Baghdad showed the extent of the differences within the PMU, which is divided into two groups. The first is known as the “State PMU” and follows the orders of PMU chief Faleh al-Fayadh and is more sympathetic to the protesters. The other, more dominant one, is more in line with the Iranian Revolution and is known as the “Factions PMU.” It is affiliated with PMU deputy chief Jamal Jaafar al-Ebrahimi, who goes by Abu Mahdi al-Muhandis, and opposes the protests, which have taken on an anti-Iran tone.

Indeed, a Dec. 8 statement and later retraction about the Dec. 6 events on the PMU's official website seemed to contrast the two sides. The statement said clashes had erupted between the Hezbollah faction of the PMU and Sadr’s Blue Hats; Hezbollah said it was attempting to rescue some of its people, who had been seized by other groups. But only a few hours later, the PMU denied the statement, claiming its website had been hacked. However, the hacking story seemed to lack validity as all of the PMU’s social media accounts also published the same statement.

It is believed that the first statement was posted by people loyal to Muhandis. A PMU leader told Al-Monitor on condition of anonymity, "There are ongoing conflicts between Fayadh and Muhandis, which are reflected within their affiliated factions every once in a while. Recent Iranian intervention has prevented clashes between the two. In June, Iran also interfered to prevent a major conflict.”

The PMU leader added, “Fayadh is unable to confront Muhandis; he is weaker and has less control.”

The source said the dispute worsened following a standardization of PMU salaries. Muhandis had been providing financial support to factions loyal to him, but the standardization of salaries took away some of his power and it appear that it was going to involve lower pay for some groups. However, he later regained control over the situation "and prevented any salary cuts. Today, Muhandis is the strongest; with the protests, the PMU regained field power and Fayadh now has little to no influence compared with Muhandis.”

Fayadh, who serves as the adviser to the National Security Council, is trying to act with a pragmatism that qualifies him to obtain the position of prime minister, and at times he has suggested that he stands with the law and the state and steers clear of Iran, unlike his friend and opponent Muhandis, who shows complete belief in all his steps and seems to rarely hesitate to clearly state his position.

Although Fayadh is the head of the PMU, most of the PMU factions follow Muhandis’ orders more, especially those that adhere to velayat e-faqih (the order of the Islamic jurist) and are accused of being loyal to Iran. Consequently, a conflict resulted within the institution that was formed five years ago following a fatwa by Grand Ayatollah Ali al-Sistani on June, 13, 2014.

Iraqi author and journalist Sarmad al-Tai told Al-Monitor, “The differences between the two men dictate the course of the dispute between them. Muhandis is a medieval ideological fighter, ready to move on broad fronts in the Middle East and has more options for victory and defeat than anyone else.”

Tai added, “Meanwhile, Fayadh, a bureaucrat who had trouble getting his job, has been enduring one loss after the other. This is due to Iran exploiting him excessively since the 2018 elections and the delusions he believed were true but ended up leaving him as a disappointed candidate to head the government and then the Ministry of Interior. His career is coming to an end with a great challenge amid the protests that showed him as an incapable man who lacks initiative and is just a cover for militia oppression as the Iraqi revolution progresses.”

Internal conflicts have previously emerged within the PMU. For instance, on Aug. 7, a similar incident occurred when Muhandis accused Israel of being behind operations targeting the PMU and only a few hours later Fayadh said that Muhandis’ statements do not represent the PMU. Meanwhile, the PMU’s official website published Muhandis’ statement, not Fayadh’s.

An adviser to the Iraqi Center for Strategic Studies, Yahya al-Kubaisi ,told Al-Monitor, “Ever since the PMU was formed by virtue of a decision by [former Iraqi Prime Minister Nouri] al-Maliki in 2014, and before the religious jihad fatwa was issued, it was clear that Fayadh would be the frontman while the true leader would be Muhandis. The latter could not be appointed chief given his complicated legal status as he was sentenced to death in Kuwait for the bombing of the US and French embassies. And so the situation remained the same even after the PMU law was enacted.”

Kubaisi said, “There is no conflict over the PMU leadership. Rather, there is a struggle over who represents the PMU’s official speech, which is intended to be less ideological and less hostile to the US. As for the crimes committed against protesters, I accuse all military and security forces of being responsible, the PMU included. I believe that there are many cases in which the PMU factions were clearly a party to the field executions of the protesters, but the Al-Sink Bridge incident seemed to be the most obvious.”

At the end of the day, the Fayadh-Muhandis conflict that seemed hidden during recent years will be more evident to the public as the Iraqi crisis deepens. It is the survival of the fittest but Fayadh seems very weak at the political and popular levels versus Muhandis, who enjoys external and internal support from the largest and strongest factions.