Will Iran-backed factions attack US troops in Iraq?

Pro-Iranian militias in the Popular Mobilization Units are calling for taking strong action against the United States and for even targeting its presence in Iraq. 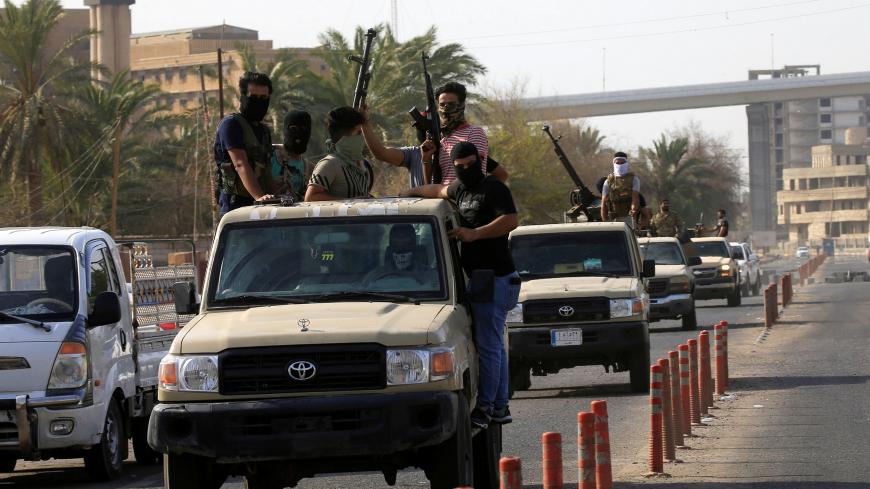 Following a series of airstrikes that Israel is suspected of conducting against Iran-backed groups of the Popular Mobilization Units (PMU), calls for US troops to be attacked in revenge for the attacks is on the rise in Iraq.

Ayatollah Sayed Kazem al-Haeri, who is an Iran-based Shiite cleric close to Iran-backed PMU factions, issued a fatwa Aug. 23 calling upon the PMU and all other Iraqi armed forces to fight US troops and exile them from the country.

“I declare from the position of religious responsibility that the presence of any US military force in Iraq is forbidden [haram] under any title: military training, advice or the rationale of fighting terrorism,” Haeri said in his fatwa.

Although the United States denied any involvement in the strikes against the PMU and said it is cooperating with Iraqi authorities in the investigation of the attacks, the pro-Iranian militias accuse the United States of being behind the assaults.

But Muqtada al-Sadr, the Shiite cleric who leads a military faction within the PMU, called Aug. 26 for patience and asked all parties to not react unilaterally, saying, “Iraq can no longer afford such careless conduct.”

This is despite the fact that Haeri is considered the spiritual father of the Sadrist movement; Sadr has said previously that he is following Haeri in religious matters and Haeri has a great influence among Sadr's supporters.

Sadr called for a special urgent meeting of top Iraqi officials to discuss the attacks, insisting on preventing “any interference from even the resistance axis (in reference to Iran and its allies), not to mention the countries at peace with Israel.” Such a meeting was held the same day between the three top Iraqi officials — President Barham Salih, Prime Minister Adel Abdul Mahdi and parliament Speaker Mohammed al-Halbusi. They have condemned the series of airstrikes, including the most recent attack on a PMU group Aug. 25 that resulted in two dead and two injured.

Last week, US officials, speaking on condition of anonymity, said Israel had struck a PMU base in Amirli in Salahuddin province on July 19. The officials did not say who had conducted other attacks on the PMU.

Salih, Abdul Mahdi and Halbusi called the strikes an “attack on Iraqi sovereignty,” calling upon the UN Security Council to hold an urgent session on the matter; the council was to meet to discuss the Iraq situation Aug. 28.

In another meeting where the three leaders gathered with the top PMU brass, Salih reiterated that the attacks against the PMU are not acceptable, pointing out that anyone who committed the strikes wants to pull the PMU into political conflict and distract it from its main task, which is fighting the Islamic State.

Al-Monitor has learned from a source who attended the meeting that the president, premier and parliament speaker wanted to ensure that the PMU will not attack US interests in Iraq.

Faleh al-Fayadh, who is the head of PMU, attended the meeting, but PMU deputy head Abu Mahdi al-Muhandis did not. Muhandis was the first to accuse the United States in the attacks and warned that US interests in Iraq could be attacked. Soon after Muhandis spoke, Fayadh said Muhandis' statement was a personal opinion that does not represent the PMU.

Al-Monitor also learned from the same source that Iraq has advised the United States that it cannot stop the PMU if any further attack takes place. This interchange was said to have taken place during a meeting between Iraqi Foreign Minister Mohammed al-Hakim and the charge d'affaires at the US Embassy, Brian McFeeters. Hakim summoned McFeeters on Aug. 24 and is said to have urged the United States to commit to the Iraq-US Strategic Framework Agreement, pointing out that Iraq is not a ground of conflict and that Iraq would use all diplomatic and legal options to prevent any foreign interference in the country.

The PMU’s Fatah bloc in parliament announced Aug. 24 that it will support Haeri's fatwa in the legislature. Asaib Ahl al-Haq’s Qais Khazali also supported the fatwa. The Sadiqoun bloc, which is Asaib Ahl al-Haq's bloc in parliament, called on the Iraqi government to warn the United States to close its embassy and consulates and take its personnel and troops out of the country before they are targeted by the Iraqi resistance movement.

Katayeb Hezbollah also issued a statement warning the United States that any further attack on the PMU will result in attacks on the US presence in Iraq across the country.

Haeri has limited followers among Iraqi Shiites and is only respected as a religious cleric among Shiite parties close to Iran such as the Dawa party. He was one of the main supporters of Shiite militias, including the Mahdi Army, when they fought US troops in Iraq following the 2003 invasion. He is an Iranian cleric, studied in Najaf and now lives in Qom. He previously issued a fatwa calling for people to go to Syria to fight to protect the Bashar al-Assad regime.

Moreover, Haeri possesses an undesirable image among many Iraqis due to his reputation for radical and violent fatwas. During the 1980-88 Iran-Iraq War, Haeri published a book, "Dalil Al Mujahid," that contained fatwas calling for killing prisoners of war or innocent individuals if necessary and other matters that are considered war crimes.

Finally, the question of whether the militias will attack US interests in Iraq depends on Iran's willingness to take the confrontation against the United States further or turn to the negotiating table; the latter seems to be a greater possibility again after Iranian Foreign Minister Mohammad Javad Zarif met with French President Emmanuel Macron on the sidelines of G-7 meeting.