As PMU gets involved in Iraqi protests, rumors about military coup spread

PMU leaders who have been silent about the protests have started to get involved, as rumors are spreading in the capital about a possible military coup in the country. 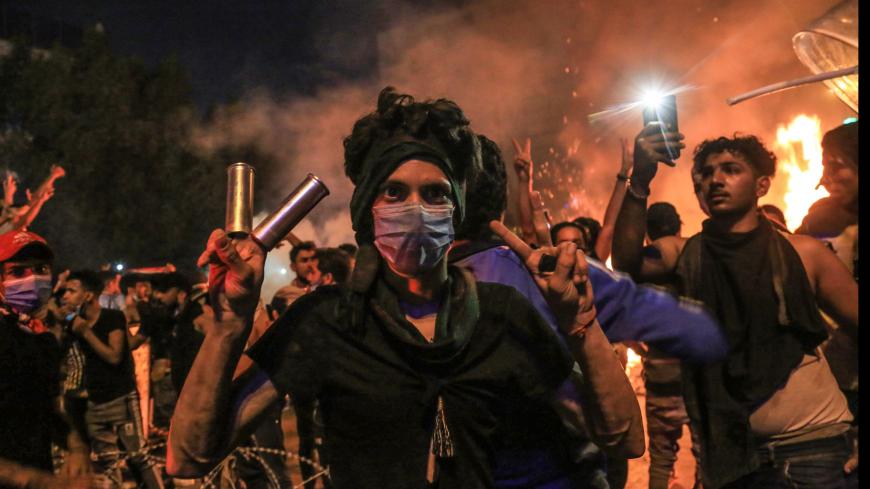 A protester wears tear gas canisters on his fingers and gestures with a victory sign during anti-government protests in the Shiite city of Karbala, Iraq, Oct. 28, 2019. - AFP via Getty Images

Roughly a month after the start of the protests in Iraq, a large number of protesters attacked the Iranian Consulate in the holy Shiite city of Karbala on the evening of Nov. 3. The demonstrators surrounded the consulate, raising Iraqi flags and throwing Molotov cocktails, causing a fire to break out on the premises.

As the protests have become strongly anti-Iranian, Iran has banned its citizens from traveling to Iraq until further notice.

With anti-Iranian sentiments growing, the Iran-backed Popular Mobilization Units (PMU) have gotten involved in the protests, accusing the West and its regional and local allies of being behind the unrest.

“Three Iraqi, regional and international parties are participating in a project aimed to create strife and chaos in the country,” the leader of Asaib Ahl al-Haq, Sheikh Qais Khazali, said in a TV interview Oct. 3. “The United States and Israel — in addition to some Gulf states, most notably the United Arab Emirates — in coordination with one of the three Iraqi 'presidents' [in reference to the president, prime minister and parliament speaker] and a prominent security leader are a part of a conspiracy aimed at bringing chaos to Iraq.”

Khazali did not elaborate on the extent of the conspiracy and the Iraqi participation in it.

However, since early this morning Iraqi social media accounts are writing that Khazali will announce a failed coup very soon, led by Iraqi President Barham Salih and the Iraqi intelligence service.

While Khazali did not specify which of the three so-called presidents he was referencing, the most likely candidate appears to be Salih. This can be deduced by elimination: Prime Minister Adel Abdul Mahdi is close to Iran and the PMU, thus Khazali, as the leader of an Iran-backed unit in the PMU, is unlikely to be accusing him of trying to bring chaos to Iraq. Meanwhile, parliament Speaker Mohammed al-Halbusi came to his position with the backing of Iran and the PMU, and has always had a good relationship with the two. Yet Salih’s conduct regarding the protests had not been in line with Iran and the PMU’s position.

On Oct. 31, Salih offered a reform package that includes fundamental changes, such as the resignation of Abdul Mahdi, early elections, and amending the electoral law and changing the election commission members.

Iran and the PMU were very disappointed with Salih's proposal, especially offering the resignation of the prime minister.

A high-ranking security figure who attended the meeting with Soleimani told Al-Monitor that he advised the attendees to not show any weakness to the protesters, otherwise they would not stop taking to the streets. Referring to the Green Movement's protests in 2009, he said, “In Iran we know how to deal with protesters; we found ourselves in that situation before and succeeded in overcoming it.”

In the Oct. 3 TV interview, Khazali accused three groups in Iraq of being used by the United States, Israel and the UAE, and their Iraqi partners of creating chaos in Iraq.

“First, the infiltrators receive funding and have the military skills to recruit saboteurs,” Khazali said. “Second, perverse movements plan to assassinate the religious authorities [in reference to Sistani and other high-ranking clerics in the Shiite seminary in Najaf]. Third, members of the Baath Party actively take part in the protests.”

It seems that Khazali wants to frighten the supporters of the protests and the public in order to stop the demonstrations.

Sistani has been supporting the protesters' demands since they took to the streets in early October. Salih, unlike PMU figures such as the head of the PMU and Khazali, has not criticized the protesters either, but instead supports them, working on fulfilling their demands.

Therefore, Khazali hopes that by talking about the rise of extremist groups like those that want to assassinate Sistani and those tied to the outlawed Baath Party, and accusing other figures like the president, the number of protest supporters will decline or at least those that support it will maintain silence.

Any violent or unlawful act by the protesters will assist the pro-Iranian groups in Iraq, to frighten the public and protest supporters with the aim of gradually reducing and ending the protests.

It seems that Abdul Mahdi has gained confidence in the support of his allies in keeping him in his position as prime minister. In a statement late Sunday, he asked the protesters to quit and stop harming the country's economy. He said his government has developed several reform plans in response to the protesters’ demands, which it will continue to work on.

At the same time, the protesters are calling for national civil disobedience, asking public servants to stop going to work. Thousands of protesters have also gathered at the main port in Basra, southern Iraq, trying to stop imports and exports to and from the country.

As both the protesters and the government are unwilling to reduce the tension and reach an agreement, it seems the situation in Iraq could escalate further in the next few weeks. This would trigger more violence and cause the country further damage, and open up an opportunity for the PMU to take the security dossier into its hands and deepen its influence in the Iraqi state.