Pro-Iranian militias behind US Embassy attack in Baghdad

The attack on the US Embassy in Baghdad by Iran-backed militias has escalated the tension between Iran and the United States. 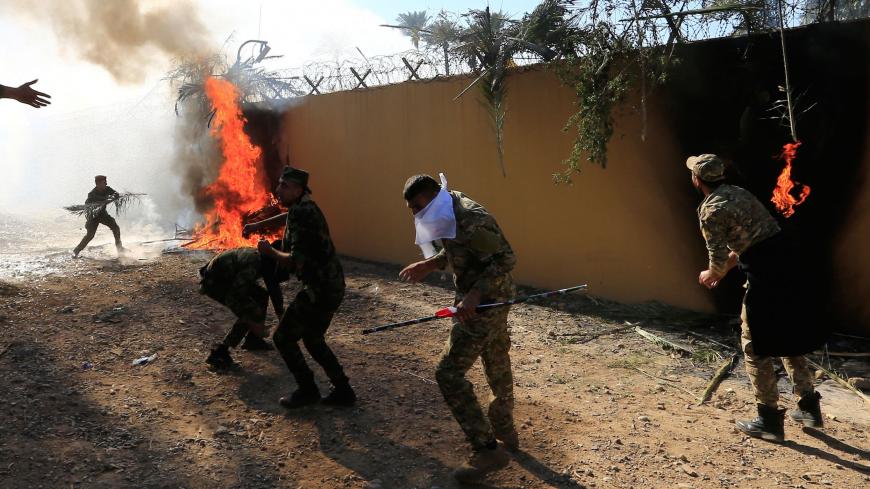 PMU fighters set the US Embassy wall on fire in Baghdad as they protest airstrikes on their bases, Dec. 31, 2019. - REUTERS/Thaier al-Sudani

Hundreds of militants penetrated the Green Zone, which hosts Iraqi government buildings and many foreign embassies, including that of the United States, early Dec. 31. They climbed the US Embassy compound's outer walls, threw Molotov cocktails over them, smashed a door and windows and set a wall and a sentry box on fire, according to reports. The State Department, however, said the embassy building itself was not breached.

The attack was a reaction to the Dec. 29 US strike against Kataib Hezbollah facilities in northern Iraq and Syria that killed dozens of Popular Mobilization Units (PMU) members and wounded others. The US strike came in response to repeated Katyusha rocket attacks against US bases in Iraq, the last of which, on the K1 base in northern Kirkuk, killed one US contractor and wounded others.

At the embassy on New Year's Eve, protesters also wrote several slogans on the walls, such as “US embassy closed by order of the people,” “Death to America and Israel” and “Qasem Soleimani is our leader.” Provocatively, some also wrote, “The uncle was here,” in reference to Soleimani, the Islamic Revolutionary Guards Corps' Quds Force commander.

The groups were from Kataib Hezbollah, the Badr Organization, Saraya al-Khorasani and Asaib Ahl al-Haq. They raised their factions' flags in the protests and on the embassy walls.

The State Department said all personnel at the embassy were secure.

A few hours after the attack, the interior and defense ministers, Yasin al-Yasirt and Nijah al-Shemmery, visited the embassy area separately and briefly before security forces were able to disperse the majority of the demonstrators. A group of protesters remained in tents set up in front of the embassy, intending to hold a sit-in until the embassy is closed and all US troops leave Iraq.

The PMU protesters announced that their next step is to go to US military bases in Iraq and surround them, calling for the United States to leave.

After the attack, caretaker Prime Minister Adel Abdul Mahdi said in a statement that no one should attack foreign embassies and that the government is responsible for protecting them. He asked all the protesters to leave the area immediately and warned that anyone attacking foreign representatives and security forces will be heavily punished.

The State Department said that in separate phone calls, Abdul Mahdi and Iraqi President Barham Salih reassured US Secretary of State Mike Pompeo that Iraq will protect the US Embassy and personnel in Iraq.

Pompeo said that the United States has no plans to evacuate the embassy and that the US ambassador — who the State Department said was not present because he was on vacation — was on his way back to Baghdad.

No clashes have been reported between the PMU protesters and the security forces, and a sit-in was continuing in front of the embassy.

While the intention to assault the embassy was announced early Dec. 31, no any action was taken against it. The Green Zone, which is usually very well fortified, was protected by very few security forces. The presence of Fayadh, who is also the national security adviser, indicates that the penetration of the Green Zone was organized and given a green light in advance, and that Abdul Mahdi was not able to stop it.

All these factors indicate that Iraqi officials' reassurances to the United States may not be reliable.

Al-Monitor saw several helicopters flying over the Green Zone and The Washington Post quoted a US official as saying, “Two Apache helicopters and a small contingent of Marines are being sent to reinforce those already guarding the embassy.”

US President Donald Trump accused Iran of orchestrating the attack on the embassy and addressed the Iraqi people over Twitter, saying, “To those many millions of people in Iraq who want freedom and who don’t want to be dominated and controlled by Iran, this is your time!”

There are increasing concerns in Iraq that the PMU might use the recent escalation as an excuse to crack down more violently on the protests against the government that started in October. Muhandis and Khazali said in their reactions to the US attack and also the attack on the embassy said that PMU will take strong actions against the United States and its Iraqi allies. Khazali said in the front of embassy, "This is the place of conspiracy against Iraq, and it is also a place of support for the jokers [pro-Iranian slang for protest organizers] and the saboteurs."

A few hours after the attack on the embassy, a group of armed people raising PMU flags attacked protesters in Karbala. A number of the protesters were wounded.

Another concern is that the attack might lead the United States to reduce its presence in Iraq and send Iraq deeper into Iran’s arms.

The above concerns are not limited to Iraqi Kurds and Sunnis, who are afraid of Iranian expansion in their areas, but also of many Shiites afraid of being left in the hands of militias loyal to Iran.

Following the US attack on PMU facilities Dec. 29, Sistani condemned what he called the breach of Iraq's sovereignty as well as the actions of some parties that create excuses for such attacks, asking the government to take action and put an end to foreign interference in Iraqi matters. His comments were seen as objecting to pro-Iranian militias’ actions and Iranian influence in Iraq.

Iran-backed militias in Iraq are feeling strong pressures from all sides, including their political rivals, the United States, protesters, and the Shiite religious establishment in Najaf. All are increasingly demanding that these militias be integrated into the official security forces, ending Iranian influence on them.