Who's behind explosions at PMU militia sites in Iraq?

As attacks on Iran-backed militias' facilities in Iraq continue, Israel actually hints it may be behind them. 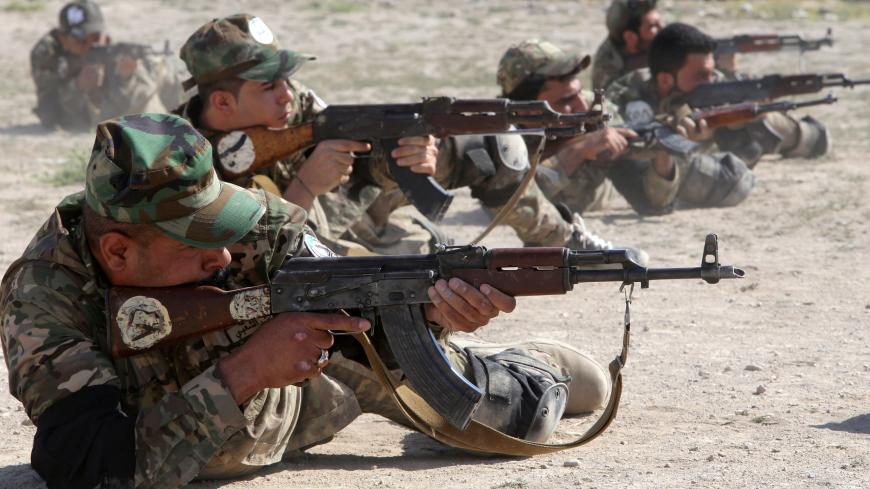 BAGHDAD — Iraqi authorities are investigating the source of attacks on four weapons storage facilities in the past month belonging to the country's Popular Mobilization Units (PMU) militia. The most recent explosion on Aug. 20 once again prompted accusations of possible US and Israeli involvement.

Some Shiite factions of the PMU coalition, which is also known as Hashid al-Shaabi, are said to be Iran proxies.

The United States has denied involvement in the attacks. The New York Times on Aug. 22 cited two undisclosed US officials as saying Israel was responsible for "several strikes in recent days on munitions storehouses for Iranian-backed groups in Iraq."

The Aug. 20 explosion occurred at Balad air base, some 80 kilometers (50 miles) north of Baghdad, where the PMU's Shiite Imam Ali Combat Division (Kataib al-Imam Ali) is located. The faction is the armed wing of the Islamic Movement of Iraq (Harakat al-Iraq al-Islamiya).

Security at Balad, where some US military training personnel stay, had been beefed up after an attack last month.

Following the latest attack, PMU deputy head Jamal Jaafar Ibrahimi (also known as Abu Mahdi al-Muhandis), blamed the United States, saying it was acting on Israel's behalf, and threatened to target any aircraft flying over PMU bases. On Aug. 22, the PMU's 12th Brigade announced it had shot down an unmanned reconnaissance drone flying over the outskirts of Baghdad that day. No other details were provided about the drone or its source. Muhandis said the PMU has "accurate and confirmed information" that the United States brought four Israeli drones this year from Azerbaijan into Iraq to target the PMU bases and leaders."

PMU chief Faleh al-Fayad, however, stepped back from Muhandis' accusations of US involvement. There have been conflicting reports about the explosions, and Fayad said that while "external players" were involved, the incidents need to be investigated further.

Muhammad Karim al-Baldawi, a parliamentarian from Balad and member of the PMU's Fatah bloc, said the latest explosion was caused by a drone "that was seen by the residents of the area at the time of the incident.”

Another explosion occurred Aug. 12 at a weapons and ammunition depot at a military base in Saqr, south of Baghdad. Some Iran-backed PMU factions are located there including the Badr Organization, Jund al-Imam and Sayyed al-Shohada. Short-range and Katyusha missiles were destroyed.

Also during the past month, explosions were reported at weapons storage facilities of two PMU factions — in Diyala province’s Ashraf camp and Salahuddin province’s Amerli base.

In an interview with Russian-language Israeli TV Channel 9, Israeli Prime Minister Benjamin Netanyahu hinted on Thursday of possible Israeli involvement in the attacks against Iran-backed Shiite militias in Iraq.

“We're acting [against Iran] not only if necessary — we’re acting in very many theaters against a state that seeks to annihilate us. Of course, I gave the security forces a free hand and instructed them to do anything necessary to thwart Iran’s plans,” Netanyahu said.

Iraqi President Barham Salih said Iraq does not want to become a battleground for other countries at the expense of the Iraqi people. "Iraq's interest comes first, and the nation will not allow others to turn it into a land for competition," Salih said.

So far, Abdul Mahdi, his Defense Ministry and the majority of PMU factions have not expressed any official position about who might be targeting the pro-Iranian PMU factions.

It has become clear that the PMU is split on the subject. While the majority of the PMU factions are trying to keep Iraq out of any conflict, some PMU factions are publicly expressing loyalty to Iran and appear to be trying to drag Iraq into Iran’s arms and its conflicts with regional rivals, the United States and its allies.

Yusuf al-Nasseri, deputy leader of the pro-Iran al-Nujaba movement, demanded last week that the Iraqi army be dissolved and replaced by the PMU. He said the army was established by America after its 2003 invasion, its forces are “mercenaries” and it's not loyal enough to Iraq.

Immediately after his statement, however, the PMU officially dismissed it, calling it "an insult that expresses his personal opinion and does not have anything to do with the PMU.” It continued, "We salute the sacrifices and heroics of our Iraqi army and renew our position by standing against the parties that have questioned its faith in the past or that seek to undermine it in the present."

Nasseri also said the PMU is a part of a regional resistance army that will fight Israel. In line with that point of view, the head of Lebanon's Hezbollah movement, Hassan Nasrallah, threatened in a public speech Aug. 16, "War on Iran means war on all axes of resistance. War on the Islamic Republic means all the region will flare up."

He added, "Today we have a resistance front, stretched from Palestine to Lebanon, to Syria, to Iraq, to Yemen."

This all indicates that the pro-Iranian PMU factions are distancing themselves from Iraqi political and public spheres, as Iraq isn't likely to join any regional axis on Iran’s side.