Iraqi government responds to protests by digging in

After nearly two months of protests in Iraq, the government is using excessive force on demonstrators and not giving in to their demands. 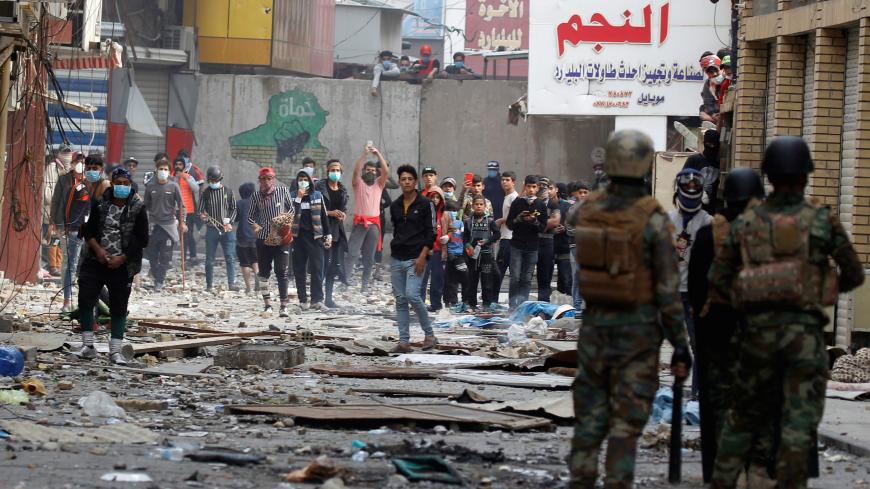 Even as the death toll from recent protests rises, Iraqi Prime Minister Adel Abdul Mahdi assured world and regional leaders that the situation in Iraq is under control. The government, he said, is committed to human rights and to protecting the protesters.

During a visit to Iraq, US Vice President Mike Pence said Nov. 23 that Abdul Mahdi “assured me that they were working to avoid violence or the kind of oppression we see taking place, even as we speak, in Iran.”

“He pledged to me that they would work to protect and respect peaceful protesters as … part of the democratic process here in Iraq,” Pence added.

During several phone calls in the last few days, Abdul Mahdi assured Qatar Emir Tamim bin Hamad, Kuwait Emir Sabah al-Ahmad al-Sabah and Jordanian Prime Minister Omar Razzaz that the Iraqi government is committed to protecting the protesters and avoiding the use of violence against them.

Yet security forces attacked protesters with tear gas and bullets in Najaf, Nasiriyah, Basra and Baghdad on Nov. 25. No official death toll has been announced. At least 13 protesters were killed in Baghdad, Basra and Nasiriyah on Nov. 24.

It is clear the Iraqi government is not willing to undertake any serious reforms to satisfy the protesters' demands. Instead, it is working on alternative plans to end the protests with minimum reforms. What are these plans and how is the government implementing them?

Despite the prime minister's assurances that the government is committed to protecting the protesters, it is estimated that 400 protesters have been killed and more than 14,000 wounded, based on tallies from the Iraqi Human Rights Commission and the Iraqi Health Ministry.

According to a source who attended the meeting, Khamenei asked the attendees to work together to stop the protests, even if it requires extreme levels of violence.

“Iran would not give up Iraq and would not allow to reduce its influence in Iraq,” Khamenei said, according to the same source.

Khamenei asked Shahrestani to pass a message to Sistani, asking him to stop supporting and protecting the protesters.

In response to this message, a Sistani representative, Sheikh Abdul Mahdi Karbalai, said during last Friday's sermon, “Bloodshed will overthrow any political system and will lead to the replacement of the government with a completely new one.”

A top cleric in Najaf, speaking to Al-Monitor, denied that a representative from Sistani's office had attended a meeting with Khamenei.

In an interview with al-Ghad TV Nov. 24, Iraqi parliament member Faiq Ali al-Sheikh said that during a high-ranking security meeting attended by several top security leaders, all attendees agreed that the protests must be stopped, even if the death toll surpasses a thousand.

Propaganda against the protesters

From the onset of the protests, Iran and its allies in Iraq — including Fayadh and Sheikh Qais Khazali, the head of Asaib Ahl al-Haq — have accused the protesters of being affiliated with and supported by the United States, Israel, Saudi Arabia and the United Arab Emirates.

Following Pence's visit to Iraq, several pro-Iran forces — such as the Sadiqoun bloc, which is affiliated with Asaib Ahl al-Haq, and the Babylon faction within the PMU —​ slammed the United States for interfering in Iraqi matters. They deemed the visit an attempt to overthrow the Iraqi government.

Abdul Mahdi and other governmental figures are considering vandalism by the protesters as terrorist actions to allow the government to respond to protests with maximum force and to ensure harsh punishments for anyone arrested, including the death penalty.

To suppress the demonstrations without taking responsibility, unidentified forces have been deployed by unknown sources to shoot protesters and abduct movement leaders and activists.

During the protests in early October, snipers targeted protesters from the tops of public buildings in Baghdad, raising the death toll from about 50 to 150.

The Iraqi prime minister admitted in October that unknown forces are indeed confronting protesters. Other Iraqi officials like the defense minister have made similar admissions.

Since then, these forces have expanded their operations in different cities. They identify the protesters' leaders and the most prominent activists and abduct them. Last week in Nasiriyah, 33 people were arrested in this way, according to the city's lawyers' syndicate. However, the number of total arrests in the city exceeded 100, according to protesters.

Several reports state that the detainees have been tortured and asked to stop participating in the protests. Al-Monitor contacted several detainees who were released. They confirmed the poor treatment, stating that they were humiliated and sometimes tortured. They were only released after signing an agreement stating they would no longer participate in the protests. They also confirmed that the forces did not identify themselves. The detainees were not able to identify where they were detained or the identities of the forces.

Iraq's National Communications and Media Commission shut down the Iraqi offices of 17 media outlets — including al-Arabia Hadath, Dijla, Rashid, Fallujah, Hona Baghdad, al-Sharqia, al-Hurra and NRT — to prevent them from covering the protests.

​In a statement, the National Syndicate of Journalists of Iraq said that the decision marked a culmination of the government's “efforts to crack down on freedom of press."

Furthermore, the internet has been cut or slowed down to limit protesters' access to social media and to prevent news coverage of violence against protesters.

The Iraqi government, like the Iranian government, is betting on the time factor, hoping that the protesters will become scared and exhausted and eventually just return home.

by Ismail BELLAOUALI with Philippe AGRET in Rabat and Marie GIFFARD in Madrid | AFP | Jun 24, 2022
END_OF_DOCUMENT_TOKEN_TO_BE_REPLACED