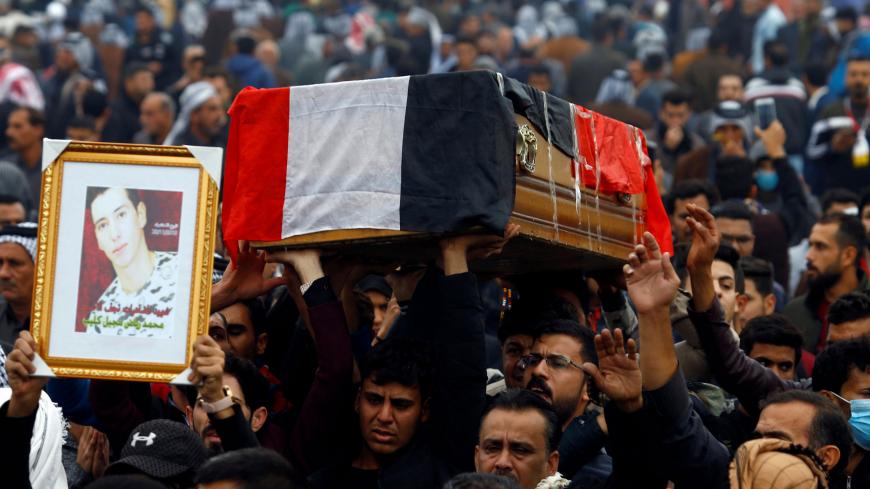 Mourners carry a coffin during the funeral of a demonstrator who was killed at an anti-government protest overnight in Najaf, Iraq, Nov. 29, 2019. - REUTERS/Alaa al-Marjani

A great number of unidentified forces in Najaf attacked protesters with live bullets, knives and batons while security forces targeted protesters directly in Nasiriyah a day after protesters burned the Iranian Consulate in Najaf.

Following the bloodshed, top Shiite cleric Ayatollah Ali Sistani called upon the government to accelerate the legal process for dismissing the government and organizing early elections.

“Given the difficult circumstances the country is going through and the clear failure of the authorities in dealing with the last two months' developments, the parliament that formed the current government is invited to reconsider its options and act in the interest of Iraq,” Sistani's representative Sayyed Ahmad Safi said during the Nov. 29 Friday prayer. He went on, “The parliament is invited to accelerate the preparation of the new electoral legislation package in a way that satisfies the people and then hold free and fair elections whose results sincerely reflect the will of the Iraqi people.”

Sistani slammed the government for attacking the protesters and preventing them from making their reform demands. He also warned that Iraq's "enemies" are working to spread chaos in the country and push it to civil war so as to bring back the "disgusting dictatorship."

Sistani's statements were clear, leaving no choice for the government and the parliament but to give in to the protesters' and Sistani's demands.

Only two hours after Sistani's statements, Abdul Mahdi announced that he would hand his resignation to the parliament very soon.

The prime minister could resign before the withdrawal of confidence. If he does, the parliament need only vote for a new prime minister within 15 days of the resignation, and the new leader has 30 days to form a government. In this period, President Barham Salih will lead the caretaker government. If the parliament votes for early elections, the caretaker government has a 60 days to organize the vote.

Since the beginning of the protests in early October, Sistani has appeared to consistently support the Iraqi people use his own influence to empower their voices.

In closing his Friday statement, Sistani said, “The religious authority will remain supportive of the Iraqi people and provide only advice and consultation. In the end, it is people who chose what they see as best for themselves without any guardianship,” meaning that Sistani has taken a stance against the idea of guardianship of the jurist, or velayat-e faqih.

The recent protests in Iraq have created a rich opportunity for Sistani to distinguish his discourse from that of Iranian Supreme Leader Ayatollah Ali Khamenei. While Khamenei criticized the Iraqi protests, accusing the demonstrators of being affiliated with the United States, Israel and Saudi Arabia, Sistani expressed support for the protests and the demonstrators’ demands.

Also, while Iran’s Quds Force commander Qasem Soleimani insisted on Abdul Mahdi retaining his position and framed his removal as a red line for Iran, Sistani has helped remove him from office.

And while Khamenei insisted Iran “would not give up Iraq and would not allow its influence in Iraq to be reduced,” Sistani repeatedly stated that no person or party outside of Iraq would be allowed to interfere in Iraqi matters. Only the Iraqi people have the right to determine their country's fate and the government should listen to them, he said, not to outsiders.

Although the protesters have scored a big victory in removing Abdul Mahdi, many other challenges lay ahead, such as passing a fair electoral law and bringing in a reliable third party like the United Nations to oversee the new elections.

The protesters are aware of these challenges and have stated that they will not leave the streets until all their demands are granted and implemented.