With an increase in the use of violence against protesters in Iraq, the call for change is also rising among internal and external actors. 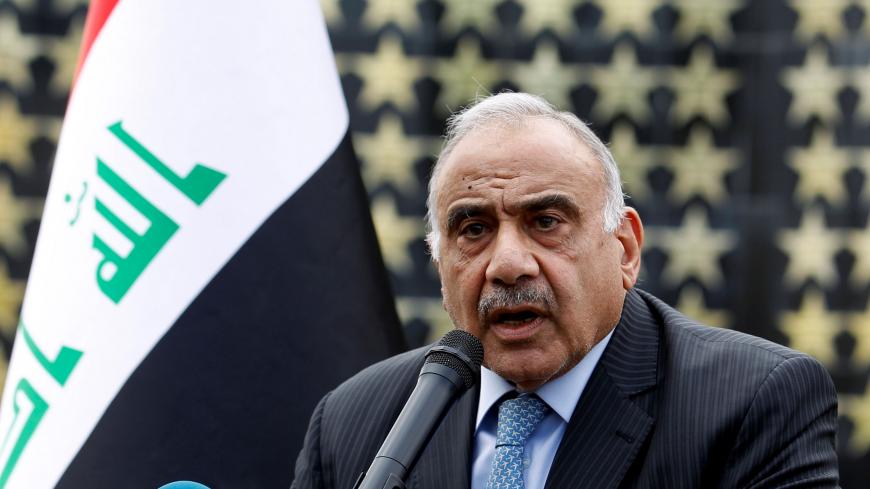 Despite several proposals to solve the crises in Iraq and in spite of using different tactics such as promises and threats, the Iraqi government is unable to stop the protests and is unable to convince protesters to go home.

Following the meeting, Hennis-Plasschaert noted that “the religious authority is concerned about the lack of seriousness among the political forces to undertake reforms.”

Sistani concurred with a UN statement issued Nov. 10 that condemned the use of live bullets against protesters and called upon the Iraqi government to show maximum restraint and undertake an investigation regarding the recent increase in abductions and arbitrary arrests. The UN statement also called on all regional and international parties to not interfere in Iraqi matters or break Iraq's sovereignty.

In the same context, US Press Secretary Stephanie Grisham on Nov. 11 condemned the use of violence against Iraq's protesters and called for holding early elections.

“The United States joins the UN Assistance Mission to Iraq in calling on the Iraqi government to halt the violence against protesters and fulfill President [Abdul] Salih’s promise to pass electoral reform and hold early elections,” Grisham said in a statement.

“Protesters will not return home if their legitimate demands [are not] addressed,” Sistani said to Plasschaert during their meeting, expressing direct support for the continuation of the protests. "Another pathway should be drawn if the government continues ignoring the protesters' demands," Sistani told Plasschaert.

A source close to Sistani's office told Al-Monitor that Sistani is referring to early elections under an amended electoral law and under UN supervision when he speaks of "another pathway."

Sistani called for a halt of the violence being used against protesters, including their arrests and abductions, and he repeated his previous demands to hold those responsible for killing the protesters accountable and to undertake real reforms within short time.

Sistani has been supporting the protests since they began in early October. His representatives have expressed his support for protesters at every Friday sermon since the beginning. His two official representatives, Abdul Mahdi Krbalai and Ahmad Safi, attended mass protests in Karbala last week, which was organized by the staff of the Shiite holy shrines that are under Sistani’s supervision.

In addition to the above support, Sistani responded to Iran's request to use his influence among Iraqi Shiites to halt the protests and give the government another chance to undertake the reforms. “I am with the Iraqi people, even if their decision is not in line with my opinions,” Sistani said. The source from Sistani's office stated that in addition to Maj. Gen. Qasem Soleimani's visit with Sistani last month, prominent Lebanese cleric from the Hezbollah movement Sheikh Muhammad Kawtharani and the Iraqi cleric from the Islamic Supreme Council close to Iran, Sheikh Jalal al-Din al-Sagheer, sent messages to Sistani asking him to accept Iran's request and work with Soleimani to halt the protests.

Soleimani attended a high-security meeting in Baghdad’s Green Zone in late October in which he called upon Iraqi officials to back Abdul Mahdi and reject any proposal that includes his resignation. He also promised to halt the protests.

But Soleimani has been unsuccessful thus far: The use of excessive violence against protesters increased after Soleimani's meeting and has resulted in nearly 100 more deaths among protesters. Also, the demonstrations are ongoing and spreading in Baghdad, Basra, Nasiriyah and other southern cities. The protesters could even close the Umm Qasr port in southern Basra for several days.

As security forces increased the use of violence against protesters last week, rumors spread in some Iran and Iran media close to Iran that in a meeting between Soleimani, Iraqi populist cleric Muqtada al-Sadr and Sistani's son, Muhammad Reza, all agreed to support Abdul Mahdi and give him from six to 12 months to undertake reforms. Sistani's office and Sadr's representative both denied this news.

With protesters receiving direct support from Sistani, the UN and the United States, it will be very difficult for Abdul Mahdi to resist them unless he uses even more violence. Such action would result in mass killings and civil war.

In such circumstances, it seems there is no solution to the crisis as long as Abdul Mahdi remains in office without undertaking early elections in accordance with a new electoral law — as are the minimum demands of protesters and their internal and external supporters.