After a meeting with heads of parliamentary blocs and other top officials, Iraqi President Barham Salih announces a reform plan in response to protester demands. 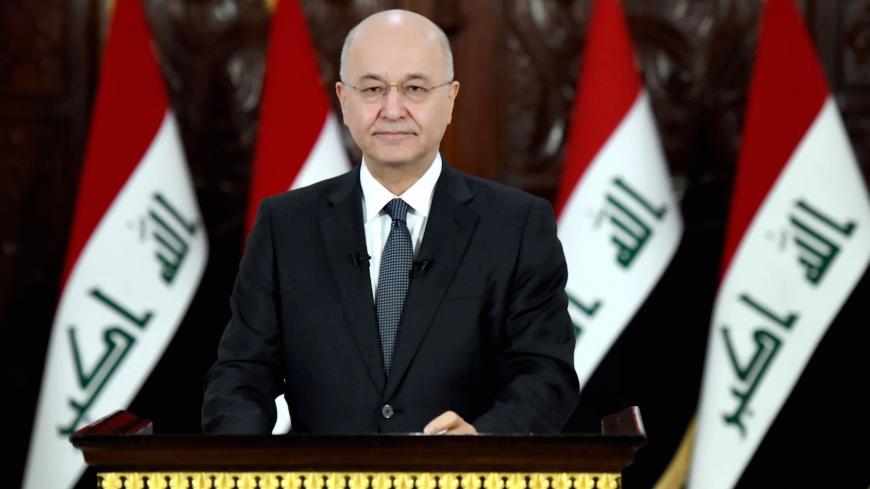 Iraq's President Barham Salih delivers a televised speech to people in Baghdad, Oct. 31, 2019. - The Presidency of the Republic of Iraq Office/via REUTERS

BAGHDAD — Iraqi President Barham Salih announced Oct. 31 his support for protesters’ demands and pledged to organize early elections and to dismiss the electoral commission and form a new one.

Salih stressed that Prime Minister Adel Abdul Mahdi agreed to resign within the “constitutional contexts.” The president said, “There is an urgent need for reforms in Iraq ... and a comprehensive national dialogue is in the works,” pointing out that the existing system has become unsustainable and that fixing it is one of main demands of the protests, which started in early October.

Salih's speech followed a series of meetings he hosted in the government palace Oct. 31 with the heads of parliamentary blocs in addition to Abdul Mahdi and parliament Speaker Mohammed al-Halbusi. The resolution Salih came up did not meet protester demands for the dismissal of the government.

Abdul Mahdi has offered to resign if a replacement is found for him. This means parliament would have to vote to dismiss the prime minister according to Article 64 of the Constitution, which further states that early elections are to be organized within 60 days following the dissolution.

Sources close to Salih told Al-Monitor on condition of anonymity that the president tried to persuade the heads of major parliamentary blocs to discuss a new electoral law and announce their intention to hold early elections, but that they decided instead to deliberate on the name of the person to lead the transition and serve as a caretaker.

The sources said that the real dispute is not really over early elections as much as it is related to the form of the future government and that it is likely that the dispute over the electoral law will last longer than expected.

The sources said that the Fatah Alliance's Hadi al-Amiri suggested the option of agreeing on Abdul Mahdi’s replacement with the Muqtada al-Sadr-led Sairoon (which means Alliance Towards Reform), and that in the event of a failure to reach an agreement a specific deadline be given to Abdul Mahdi to complete the reforms and reach agreement on the proposed laws, including the electoral law.

Analysts said that they believe Salih, in his speech, tried to blame Abdul Mahdi for refusing to resign immediately, and that the president does not have sufficient powers to meet the protesters’ demands. Analysts also said that Salih's efforts to reach consensus on the electoral law and replace the commission is all he has to offer right now, but that only parliamentary blocs can take important decisions. Foremost among these is dissolving the parliament after a no-confidence vote on Abdul Mahdi.

Salih’s promises to eradicate corruption are also limited. “I am with you to fight corruption,” he said, noting that corruption cases were referred to the judiciary for judgment. But this does not satisfy protesters, who even called for “overthrowing the regime” or replacing the entire ruling class.

Abdul Rahman Abdul Sattar, a protester who has been in the streets since day one of the protests in Tahrir Square in Baghdad, told Al-Monitor that he did not hear the president's speech until returning home (Abdul Sattar said there was no Internet connection in Tahrir Square and protesters did not have any immediate news about the speech).

Abdul Sattar said, “After reviewing the president’s pledges, we do not believe they fulfill the protesters’ demands, foremost of which is dismissing the government and setting a time limit for elections as well as amending the constitution. The president does not have wide powers to keep his promises and the political blocs have not yet announced their support of his pledges,” he added.

In any case, the president’s speech and the solutions he suggested to the Iraqi crisis should add new momentum to the popular protest movement as they are in line with most of the demands the protesters called for in the streets and on social media. These include dismissing Abdul Mahdi, adopting a fair electoral law, forming a new independent electoral commission and then amending the constitution.

On the one hand, Abdul Mahdi’s insistence on what he describes as “constitutional contexts” to resign or for a no-confidence vote by the parliament pushing protesters to stay in the streets. On the other hand, the prime minister is complicating the political scene as pro-Abdul Mahdi blocs are disrupting the parliament’s work in every session involving the confidence vote or the faltering negotiations between Amiri and Sadr on the appropriate alternative to Abdul Mahdi.

This indicates that Salih’s pledges will not be implemented and that a move toward early elections only reflects his personal vision, one which blocs and political parties are not obliged to follow.