Iraqi protesters have returned to the street in force over the past five days for the second time since early October. 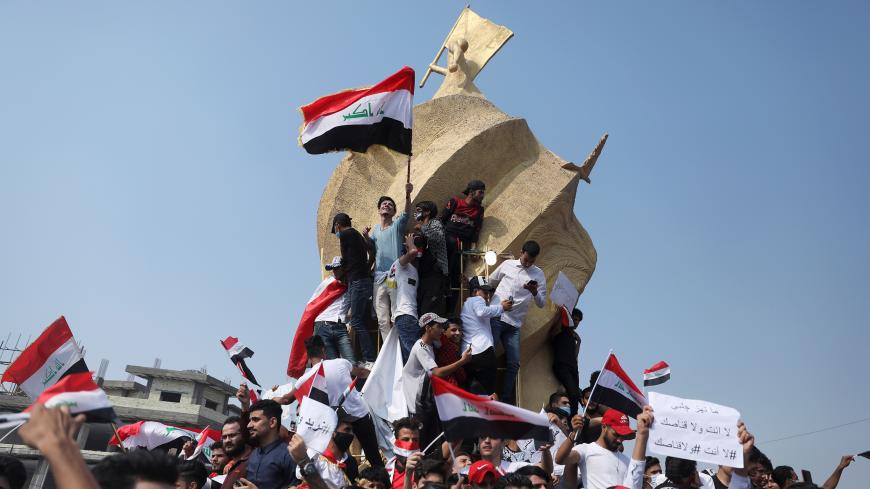 Iraqi protesters have returned to the street in force over the past five days for the second time since early October. Their calls for radical political change have rattled the government, sparking violent clashes with security forces and allied militias that have killed 74 people and injured almost 4,000 since Oct. 25, according to the Iraqi High Commission for Human Rights.

Why it matters: While the protesters lack official leaders or representatives to express their demands, their street slogans and social media statements point to certain key demands, including: amending the constitution to remove sectarianism from the Iraqi government; changing voting laws to guarantee impartial elections; demanding that the judicial system fight corruption promptly; and replacing the government with one that is able to provide jobs and services to citizens. Protesters also are angry at the Iraqi government’s susceptibility to foreign influence, particularly from Iran. Some are raising more fundamental requests such as placing Iraq under United Nations supervision or changing the parliamentary system back to the presidential form of government in place under Saddam Hussein.

Promises, promises: Prime Minister Adel Abdul Mahdi has reached out to the protesters in public speeches, offering to disarm the militias and change electoral laws while promising jobs and better services. He has promised to replace his Cabinet with nonsectarian independents and said he would replace the Independent High Electoral Commission with an impartial and professional commission. He has also acknowledged that some militias are refusing to come under government control and promised to dissolve and disarm any militias that do not integrate into the state forces. His reform plans remain vague, however, and he has taken few if any practical steps to implement them. President Barham Salih also supports protesters’ demands, and has been working to change the country’s unpopular electoral law so that people can elect parliamentarians directly. The current electoral law is based on the Sainte-Lague method, with votes going to political parties rather than individual candidates. This, critics say, allows parties to play with the votes in order to maintain influence and dictate demands of the parliamentarians.

Salih is also working on reforming the electoral commission, bringing in independent experts, judges and so forth as members, rather than the current composition that relies primarily on representatives of political parties.

In a special session Oct. 28, parliament offered several of its own reform plans including reducing the salaries of Iraqi officials and members of parliament. The protests, however, are not letting up. Meanwhile senior Shiite cleric Ali Sistani in an Oct. 11 sermon supported the protesters’ demands and slammed the government for using excessive force. And the leader of the largest parliamentary bloc, Muqtada al-Sadr, has asked Abdul Mahdi to resign even though Sadr had backing Abdul Mahdi's bid for the premiership.