Iraq on low boil in anticipation of renewed protests

The crisis in Syria has only made Iraq’s problems worse. 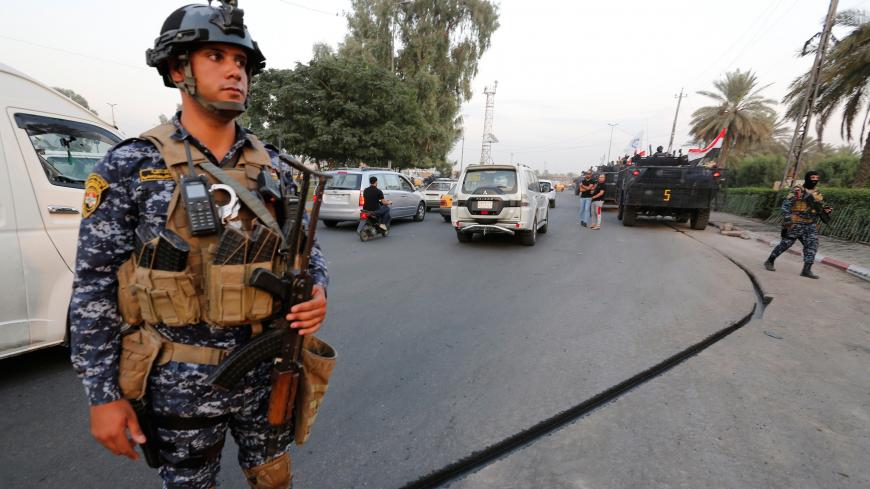 A member of the Iraqi federal police stands guard in a street in Baghdad, Iraq, Oct. 7, 2019.

The agreement reached between US Vice President Mike Pence and Turkish President Recep Tayyip Erdogan for a pause in the Turkish offensive in Syria got all the attention this week, but don’t take you eyes off Iraq, which remains on low boil in anticipation of another round of protests.

Before we start, we should note that the "pause," if it holds, ends Oct. 22 — the day Erdogan is to meet Russian President Vladimir Putin in Sochi. Is that a coincidence? Putin has already secured a deal between the Syrian Democratic Forces (SDF) and the Syrian government. His next act, as we have written, is a renewed border security pact between Ankara and Damascus. Whether the cease-fire holds or not, the summit in Sochi will be the benchmark for what happens next. Russia is already coordinating with Syria and Iran, so Putin has all his cards in play. If he can move Erdogan toward a withdrawal, and an eventual end to hostilities with Syrian President Bashar al-Assad, we may be at the beginning of Putin’s plan for the endgame in Syria.

Iraqi street may not wait for reforms

Iraq Prime Minister Adel Abdul Mahdi’s response to the protests, which kicked off Oct. 1, has been aggressive, including government support for more job opportunities, affordable housing and various subsidies. He has sacked 61 officials and initiated an investigation into police officers who reportedly fired on protesters.

But it is a race against time, with the prospect of renewed protests after the Arbaeen ("fortieth day") religious holiday ends Oct. 25.

Iraqi security forces have arrested and detained hundreds of people, and internet service has been heavily restricted, to clamp down on organizers and activists. The death toll exceeds 120, with 6,000 wounded. Mustafa Saadoun reports that although 500 of the 800 detainees were released, many activists are fleeing the country, fearing being killed or detained by Iranian-backed militias, or Popular Mobilization Units (PMU). The PMU are alleged to have been involved in some of the more violent responses to the protests, including snipers firing at demonstrators.

Meanwhile, Iraqi President Barham Salih is also seizing the mantle of reform. In a prescient interview with Al-Monitor just days before the protests, he said that Iraq’s leaders cannot be diverted from their “real mission” of providing jobs for Iraq’s unemployed graduates and youth, and that corruption was the "political economy of conflict." Salih is pressing for a constitutional amendment to change the country’s electoral law in consultation with a wide segment of Iraqi leaders and UN experts.

Abdul Mahdi announced Oct. 8 that he had reached an agreement with so-called coordination committees to postpone the protests, which had called for the downfall of the "regime," until after Arbaeen, which begins Oct. 20.

But Saadoun reports “it seems that statement was just designed to calm the public. The Iraqi protests do not have any coordination committees or known leaders, and Abdul Mahdi’s office did not post any photos of its supposed meeting with such parties.”

The Arbaeen holiday draws millions of Iraqis and others, including Iranians, to Karbala.

“Arbaeen itself might not trigger protests,” writes Saadoun, “but it will constitute a mobilization and awareness-raising occasion to stage a huge protest in the coming days.”

“The Iraqi government is well aware that an Arbaeen protest would have a snowball effect if it expands beyond crowds visiting Hussein's shrine,” adds Saadoun. “In such a case, it would carry different messages, one of them being that Shiite visitors protested against the Shiite government and that any action against protesters, no matter how much their protests escalate, would put the final nail in the coffin of the legitimacy of Abdul Mahdi’s government.”

The widespread demonstrations occurred only in predominantly Shiite provinces, not in Sunni or Kurdish regions, Adnan Abu Zeed reports, but that could change.

“This is bound to happen if the government does not provide better services, infrastructure and employment,” he writes. “Disparity between the people and the political class and the spread of poverty are issues everyone is facing irrespective of their sectarian belonging.”

Abdul Mahdi has the backing of the key Kurdish parties, which have acknowledged the right to peaceful protests, but consider the prime minister and his government the best partner to resolve outstanding issues between Baghdad and Erbil, including over Kirkuk, oil revenues and the region’s share of the federal budget, as Omar Sattar reports.

Sadr tells Iraqis to ‘mobilize by the millions’

Populist cleric Muqtada al-Sadr, who has called for Abdul Mahdi’s resignation, is telling his followers to "mobilize by the millions" during Arbaeen.

Sadr’s Sairoon (“Forward”) political coalition is the largest bloc in the Council of Representatives (parliament). Sadr was caught off guard by the demonstrations last time, and if there are protests next week, he plans to be in the mix and position himself as the broker of the eventual compromise, if it comes to that. Sadr keeps his ties to Iran, which backs Abdul Mahdi. He and other Iraqi leaders are wary of the precedent of the street taking down a prime minister, but they are monitoring the trends.

Sistani, under pressure from Soleimani, keeps distance from Baghdad

Grand Ayatollah Ali Sistani, the most influential Shiite cleric in Iraq, has blessed the protests and, Ali Mamouri reports, has rejected the prime minister’s requests for support.

Sistani is in a tough spot. “Although he has long criticized successive Iraqi governments for failing to build a functional state and provide sufficient services to the citizens, many Iraqis consider him the mastermind of the Iraqi political process since 2003,” Mamouri writes. “Therefore, he is trying to distance himself from the government as much as possible, pressuring behind the scenes for reforms.”

Sistani’s stance puts him at odds with Iran, which backs the government. Iran, for its part, is becoming increasingly unpopular among Iraqis because of the behavior of rogue PMU and its heavy hand in perceived Iraqi corruption. But Tehran’s hold is still strong.

Mamouri adds that the “commander of Iran's Quds Force Qasem Soleimani is in Najaf since last week. He has warned Sistani that he should make it clear whether he is with the protesters or with the government. Sistani has already expressed his full support to the protesters' demands.”

Syria makes it all that much harder for now

The economic reforms required to stabilize Iraq are daunting — including a massive overhaul of the banking and electricity sectors — to name just two cited by the International Monetary Fund (IMF). And the impact of a reform package will take time, and certainly won’t be solved by the end of Arbaeen next week. As we explained here, in reference to Egypt, even a successful IMF-based reform program may not be enough to quiet the streets, given the demographic realities. Iraq has 38 million people — roughly 40% under 14 years of age, and about 58% under 24 — and an unemployment rate of about 15%, which is much higher for the under 24 cohort.

The Turkish invasion of Syria made it that much harder for Iraq. More than 1,000 Syrian refugees have crossed into Iraq since Oct. 9. Iraq already hosts over 250,000 displaced Syrians, mostly in the Kurdistan Region, where an estimated 1 million Iraqis upended by the Islamic State (IS) have yet to be resettled. Iraqi leaders fear that IS prisoners escaping from Syria may find their way into Iraq. Iraq has also agreed to repatriate and put on trial 4,000 Iraqis who had been detained in Syria, a move that, while welcomed by the international community, will strain Iraq’s judicial and prison systems.

Concern about the potential spillover effects of the Syrian conflict was a focus of the meeting in Baghdad this week between Salih and US Assistant Secretary of State for Near Eastern Affairs David Schenker, as well as Iraqi national security adviser Falah al-Fayyad’s meeting with Assad in Damascus.

With the US withdrawal from Syria, Iraq becomes even more pivotal in the battle against IS holdovers. The Pentagon may consider expanding its footprint and engagement with Iraq accordingly, but in a manner not to upend the fragile political and economic situation.