Will Arbaeen observance bring peace or protests in Iraq?

As the Arbaeen pilgrimage is about to start in Iraq, authorities fear demonstrators will launch new protests. 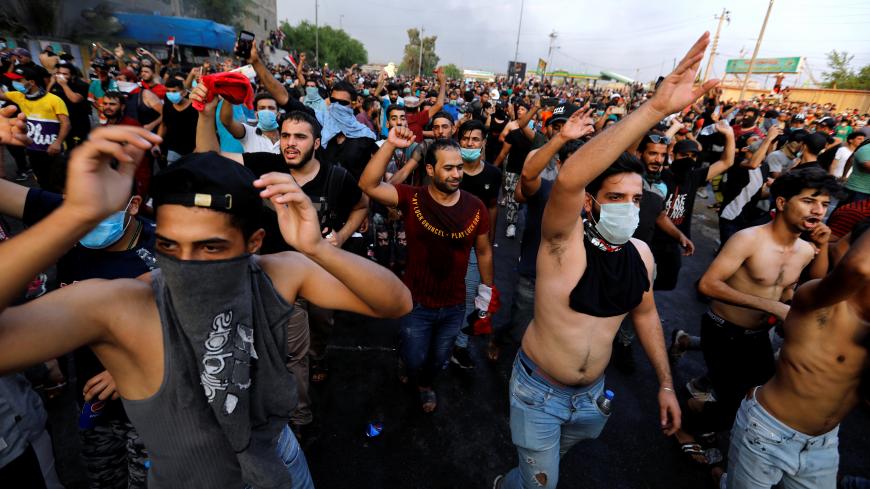 Though the anti-corruption demonstrations that began Oct. 1 in Iraq seem to have quieted recently, government authorities worry protesters plan to take advantage of a religious observance this week to press for their demands.

Arbaeen, a Shiite Islam pilgrimage that commemorates the martyrdom of Imam Hussein ibn Ali, the Prophet Muhammad's grandson, will be held Oct. 19. It typically draws millions of people to Karbala, where he is buried.

Yasen al-Bakri, political science professor at Al-Nahrain University in Baghdad, explained the context to Al-Monitor, saying, “In Shiite belief, Hussein is the symbol of revolutions and protests against oppression by the ruler. … The [government] is aware of the revolutionary energy simmering on this occasion, and it is afraid of not being able to control the situation at the security level. After all, security forces might join the protesters or refuse to obey oppressive orders under the influence of Arbaeen."

On Oct. 8, the office of Iraqi Prime Minister Adel Abdul Mahdi announced an “agreement” with "coordination committees" to postpone the protests until after Arbaeen, but it seems that statement was just designed to calm the public. The Iraqi protests do not have any coordination committees or known leaders, and Abdul Mahdi’s office did not post any photos of its supposed meeting with such parties.

On Oct. 10, the Baghdad Operations Command, the highest security authority in Baghdad, called on the public to “refrain from protesting” in order to avoid distracting patrols from securing Arbaeen events. The call came after some protesters encouraged taking advantage of Arbaeen to widen the scale of anti-government protests.

Subsequently, on Oct. 15, influential cleric Muqtada al-Sadr asked protesters to "mobilize by the millions" during Arbaeen.

Banners are displayed in some streets of Baghdad and southern provinces to indicate two roads: one leading to Karbala, and the other, dubbed “Hussein Revolution,” is the road to the protests.

Protester Ali al-Sumari told Al-Monitor, “It is very likely that we will use Arbaeen to mobilize for future protests. Many preachers will have to fulfill their duties [on Arbaeen], even if they support the government, because of the rising protests in Iraq and international interest in them. The spotlight has been on crimes that accompanied these protests, in addition to the religious authority’s mention of them [in recent speeches]."

The latest protests erupted Oct. 1 and the death toll quickly exceeded 100, with more than 6,000 reported wounded.

Sumari added, “What's even more important than mobilization is asking [the authorities] to reveal the identity of those arrested and to release them, and quit terrorizing and pursuing journalists, activists and media figures who have been facing threats since the protests began.”

About 500 of the 800 people detained have been released, Iraqi officials told Reuters Oct. 8.

The Iraqi government is well aware that an Arbaeen protest would have a snowball effect if it expands beyond crowds visiting Hussein's shrine. In such a case, it would carry different messages, one of them being that Shiite visitors protested against the Shiite government and that any action against protesters, no matter how much their protests escalate, would put the final nail in the coffin of the legitimacy of Abdul Mahdi’s government.

Lebanese journalist Mustafa Fahs, who follows Iraqi affairs, told Al-Monitor, “All parties — whether the government or protesters — are cautious when it comes to Arbaeen, especially since the pilgrimage is a free religious ritual. The visitor can address whoever he wants about any topic, including reform and justice.”

However, both protesters and the government want "to avoid being accused of exploiting religion," he added. "Therefore, damage is being avoided. But I don't think the visit will be devoid of protest-supportive slogans. It might even be a factor pushing people to take to the streets.”

Arbaeen itself might not trigger protests, but it will constitute a mobilization and awareness-raising occasion to stage a huge protest in the coming days.

Iraqis have been protesting for more than a decade. In 2008, demonstrators objected to a lack of services and rampant corruption in state institutions. Those are still issues today, compounded by the 30% poverty rate and 40% unemployment rate among youths, according to statistics from the International Monetary Fund.

Bakri noted that Shiites have used the revolutionary symbolism of Arbaeen many times in Iraq's history. "Based on that, rulers would be on guard at the security level, come Arbaeen. But after 2003 [when a US-led coalition invaded Iraq] the situation changed, and the authorities started investing in this commemoration to cement their authority and gain confessional legitimacy on par with the electoral legitimacy. They began using this occasion for the elections or to mobilize Shiites against rivals from other sects,” he noted.

He added, “The main difference this year is that the protests have demographically and geographically targeted the Shiite authority, which put the latter in a quandary. A new Iraqi reality emerged after 2003, as protesters realized the emotional impact of this occasion and its mobilization power. Therefore, they try to take advantage, while authorities fear their moves."