Arbaeen is a religious commemoration that Shiites from around the world celebrate as a religious obligation and a social deed, and some witness miracles performed by Imam Hussein ibn Ali. 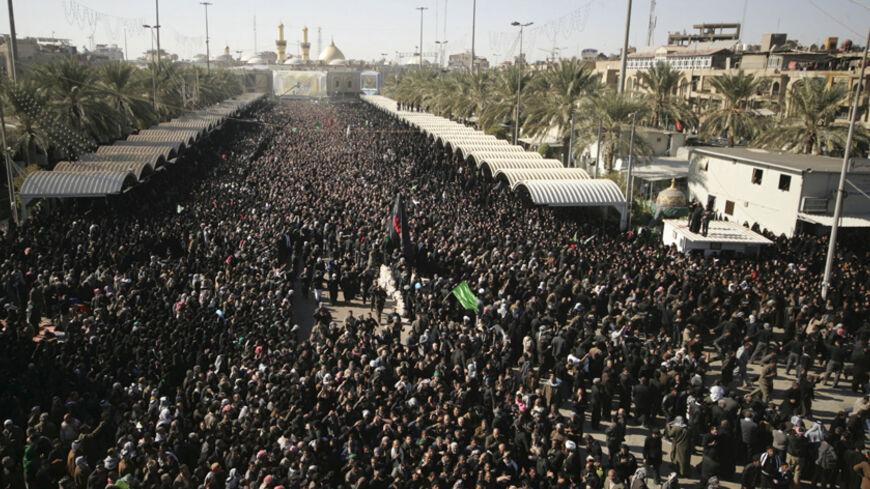 Shiite pilgrims gather at the Imam Hussein shrine during a ceremony marking Ashoura in the holy city of Karbala, Dec. 6, 2011. - REUTERS/Mushtaq Muhammed

KARBALA, Iraq — Amir Faez al-Atbi, 20, from Babil province (100 kilometers, or 62 miles, south of Baghdad), gets ready each year to participate in the religious commemoration of Arbaeen, by offering his services to Shiite pilgrims from around the world heading to the holy city of Karbala. These Muslims travel dozens of kilometers on foot from different cities. Atbi lives in Babil, which represents an important intermediate station for the pilgrims coming from different Iraqi regions. He deals with hundreds of visitors who pass by the congregation halls and pavilions set up by the people of the provinces surrounding Babil.

Atbi wakes up in the early morning to serve tea to the travelers. He told Al-Monitor, “The vast majority of the city’s youth dedicate themselves this month every year to set up pavilions and congregation halls in order to provide accommodation, food and beverage and medical services for visitors.”

The pavilion provides a temporary residence and accommodation; it is designed to be installed very quickly, and at the end of the celebration it is dismantled and its parts are stored for the following year. Its appropriate surface allows pedestrians who have been walking dozens of kilometers toward the holy city of Karbala to have a meal and beverages and to receive necessary assistance.

Abu Ali, 86, is sleeping on a mattress on the ground alongside the pavilion where Atbi has volunteered. Abu Ali has traveled 30 kilometers (18.6 miles) to reach Karbala. He told Al-Monitor that he has been performing this annual religious pilgrimage for dozens of years.

Traditionally, the people of Iraq prepare themselves each year, about a month (it changes every year, according to the Hijri calendar) before Arbaeen, to commemorate the death of Imam Hussein ibn Ali, the Prophet Muhammad’s grandson. This is a religious tradition Shiite Muslims have been observing by commemorating the deceased and visiting his grave on the day marking 40 days after his killing.

Falah al-Khafaji, a volunteer in religious service, told Al-Monitor, “Religious occasions are not just about worship or showing respect to the sacred symbols, but they have become a social tradition where the sacred comes in fusion with popular heritage.”

“Families and tribes compete to show off their name in religious convoys, where religious names are conflated with tribal names. Each tribe highlights its name on banners and flags,” he added.

Academic and former director of Al Najaf Satellite TV Channel Ali Moamen highlights the social dimension of religious occasions. He told Al-Monitor, “This religious event is the largest gathering in the world, as the number of participants exceeds 15 million people, i.e., around one-third of Iraq’s population.”

He further said, “What is interesting about this human crowd is that all society segments take part in it. Despite its religious character, nonreligious people also participate in it, in addition to illiterates and holders of high academic degrees, and ordinary people and leaders of the country.”

During the religious march, the people in charge of congregation halls — who call themselves the servers (Khaddam) of Hussein — offer their services without charge to the masses, from food and beverage to accommodation.

Saeed Abdul-Hussein, 50, who traveled 200 kilometers (125 miles) from the city of Samawah (270 kilometers, or 167 miles, south of Baghdad) to reach the outskirts of the city of Hillah in Babil province, told Al-Monitor that during the march — which lasted several days — he did not feel tired and all his needs were provided by the abundance of congregation halls that offer services along the way.

Kareem Alabi, a municipal council member of the city of Hamzah al-Gharbi (20 kilometers, or 12 miles) south of Babil), hung images of martyrs of the Iraqi army in the congregation hall that he owns, named Gharib Tous, on the road to Karbala. He put up these pictures as he considers the war led by the Iraqi army against the Islamic State (IS) a reflection of the Battle of Karbala, during which Imam Hussein was killed.

Haj Amin Hassan, a sponsor of a religious convoy, told Al-Monitor that the defeat of IS in Jurf al-Sakhar was made possible by Imam Hussein’s blessing. “This is one of the miracles of the Imam,” he said.

Hassan described another one of these miracles., “A man who was suffering from arthritis performed pilgrimage to Karbala last year. He was completely cured when he saw an apparition at night that touched his body,” Hassan said.

Some Iraqis are eager to highlight these miracles in the media and social networking sites. In response to skeptics, Abu Mohammed al-Amiri posted video footage of one of the visitors of Karbala, who was speech-impaired. During the march, the latter started speaking after he felt something strange coming out of his throat which prevented him from talking, while his older brother started crying, praying and thanking Imam Hussein.

Amiri told Al-Monitor from his Facebook account that he shot the video himself to prove to the infidels (as he put it) that Imam Hussein performed a miracle that he saw with his own eyes.

Hassan Salman, writer and chairman of the Board of Trustees of the Iraqi Media Network (IMN), told Al-Monitor, “The Arbaeen pilgrimage enjoys a historic, existentialist and religious depth, especially for Shiites. It also enjoys a clear political dimension.”

Salman added, “Even sick and disabled people take part in this humanitarian phenomenon, hoping to heal. They do so to defy their pain and seek rapprochement with Allah. There are several stories and events related to this ritual that strongly encourage people to perform it.”

Regardless of the contradictory positions on this commemoration arising from differing religious beliefs, everyone agrees that it is the largest mass gathering in which people strongly and enthusiastically participate to help each other and to feel collective faith, which confers to them a feeling of power and safety.