A new road is being built to make it easier for Shiite pilgrims to walk to Iraq's holy city of Karbala, where they commemorate the death of Imam Hussein Bin Ali. 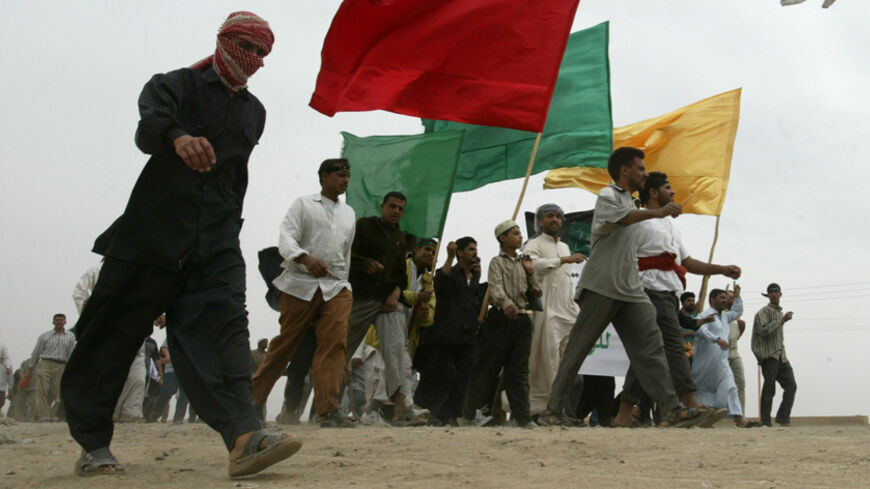 An Iraqi man joins other pilgrims on the way to Karbala, April 19, 2003, to celebrate the Shiite Ashoura. - REUTERS/Petr Josek

KARBALA, Iraq — Ali Jaafar was all set to cross around 125 kilometers (78 miles) from his residence in al-Diwaniya city, south of Baghdad, to the holy city of Karbala on the holy day of Arbaeen to commemorate the death of Shiite Imam Hussein Bin Ali.

Imam Hussein was buried in Karbala after his murder in 685 A.D. by Yazid ibn Mouawiya’s army in the Battle of Karbala. Shiite Muslims from around the world perform a yearly pilgrimage on foot, weep at his grave and vow to defend his principles on Arbaeen. Thousands of people, including men, women, children and even handicapped people, participate in the annual event that has been celebrated since 2003. Before then, the pilgrimage was forbidden by Saddam Hussein’s regime.

Jaafar, like thousands of others, has gotten used to performing this annual pilgrimage. But, this year, the march will be easier, as a new road, dubbed “Ya Hussein,” has been constructed and designated for the Shiite pilgrims visiting the holy city.

Engineer Abu Haidar al-Mousawi, who worked on the road, told Al-Monitor, “The new road is destined for visitors crossing long distances on foot. It is not paved, but it is well leveled and covered with sand, adjacent to the main road that cars take.”

On the Hashimiya intersection, south of Babil, Haj Saad al-Yasiri told Al-Monitor that he had come from Basra on foot and crossed long distances on the road, adding, “Many parts of the road have been completed, and this is a beneficial project.” He went on, “I left Basra around two weeks ago, and I am still walking to Karbala. I hope to reach it before the commemoration. I will have to leave Iraq soon to treat my daughter, and I had to perform my religious duty prematurely.”

Yasiri said, “The trend was for pilgrims coming from remote cities in the south and north to start their journey a month earlier to guarantee reaching the holy city days before the commemoration.”

Journalist and political analyst Jassem al-Moussawi told Al-Monitor, “This may be the first religious road in the world.” Noting its spiritual importance, he said, “This road unites people facing injustice and shows humanitarian solidarity through interaction between the poor and the rich and regular citizens and officials, because they all participate in this religious march.”

Umm Heidar, a housewife, told Al-Monitor that last year, she covered around 50 kilometers (31 miles) during her journey, which started from Hamza al-Gharbi city to Karbala. She walked through fields and villages instead of taking the main road, as most pilgrims do.

“Ya Hussein Road was not complete yet at the time, and I had to take the byroads, to which we had grown accustomed before 2003. The security officials in the former Iraqi regime, which forbade Shiites from performing this religious ritual, did not watch the byroads,” she said.

Umm Heidar, who is driven by her religious convictions to urge other people to walk to Imam Hussein’s tomb in Karbala, said, “People only need patience during their pilgrimage because food, drink, sleeping places and medical services are all available along the road, provided by volunteers who see to the needs of the pilgrims.”

All along the road, large tents have been set up for the pilgrims to sleep in. Volunteers supply whatever the travelers need.

Amer Abdullah, the former municipal manager of al-Shoumli district who works as an engineer in Hashimiya, told Al-Monitor, “The local governments have divided the road works, according to the road’s length within the borders of each district.” He went on, “The road is being paved with a mixture of sand and gravel, and it is estimated to be around 35 kilometers [22 miles] long in Babil. Service facilities have been established along the road for rest, prayer and sleep, in addition to bridges on the intersections.”

Cleric Hussein al-Khakani told Al-Monitor that the road has a deep religious symbolism, adding, “Many patients were healed after performing a pilgrimage to the holy city. These are miracles from Imam Hussein.” Amran Ali, who suffers from rheumatoid arthritis, told Al-Monitor, “I was completely healed after I walked to the holy city last year and crossed 50 kilometers [31 miles] in one day.”

Police Chief Adel al-Yasiri told Al-Monitor, “Thanks to the security detachments, which protect pilgrims from armed operations along the road, the road is easy to monitor.”

Many pilgrims have lost their lives during their pilgrimages to holy Karbala since 2003 in bombings and armed attacks.

The road has become a symbol of Shiite faith in Iraq. The Shiites have sought to build infrastructure that makes it easier for them to practice their religious rituals, away from attacks by the Islamic State, which targets Arbaeen pilgrims each year.