Religious events in Iraq have come to serve as opportunities for sects to make a show of force, as tensions persist in the country. 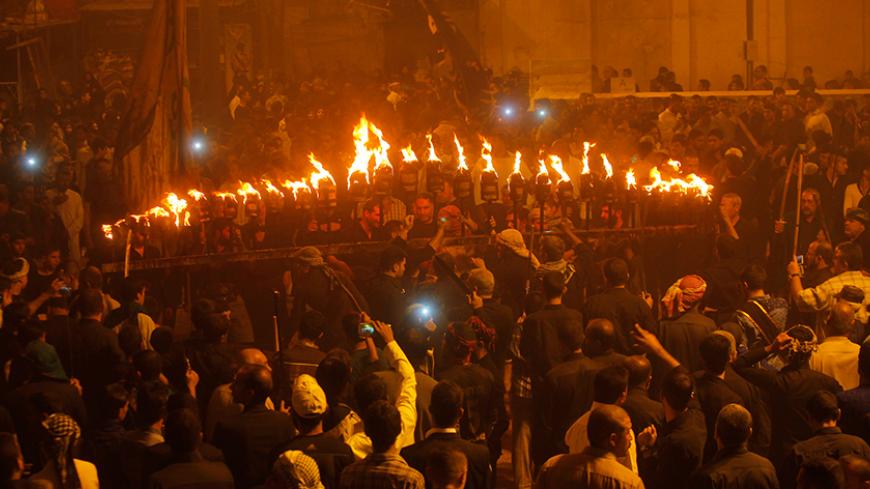 Shiite Muslims take part during commemorations for Ashura in Iraq, which falls on the 10th day of the Islamic month of Muharram, Nov. 3, 2014. - REUTERS/ Alaa Al-Marjani

BAGHDAD — Shiites all over the world, particularly in Iraq with its Shiite majority, started their religious commemorations on Oct. 14 marking the beginning of Muharram, the first month of the Islamic calendar and one of the four sacred months of the year. The commemorations last for 10 days, during which mourning rituals, condolence gatherings and rituals in remembrance of the Battle of Karbala take place. The battle happened more than 1,300 years ago, in 680, when the Prophet Muhammad's grandson Hussein ibn Ali was killed.

The mourning rituals reach a climax on the day of Ashoura, the tenth day of Muharram. Arbaeen marks the anniversary of the end of the 40-day mourning period for the death of Imam Hussein and is commemorated by visiting Imam Hussein's Shrine in Karbala.

He added, “The number of pilgrims reached nearly 20 million people of different nationalities, and they spent 40 days in Karbala last year.”

This number seems to be exaggerated. Yet Iraqi Defense Minister Khaled al-Obeidi said on Dec. 20, 2014, that “The number of pilgrims who arrived in Karbala to commemorate Arbaeen exceeded 17 million people.”

This large number has raised political controversy on the already tense Iraqi street. Despite the war on the Islamic State (IS) and the crippling economic crisis due to the drop of oil prices, Shiites seem determined to make the pilgrimage to Karbala — a trip they view as a challenge, according to cleric Ali al-Yasiri, who oversees religious events in Babil. In an interview with Al-Monitor, he said that he considered the pilgrimage to Karbala and the Ashoura commemorations as “a battle in the war on the radical IS and anti-Shiite forces, most notably Sunni groups such as al-Qaeda, in addition to Sunni clerics who consider the Shiites as infidels and non-Muslims.”

Yasiri’s statement came in response to the call on Oct. 13 from IS in Saudi Arabia, known as Wilayat Najd, to “expel the Shiites from the Arabian Peninsula," and to the fatwa issued “to kill them anywhere and anytime.” It is also a response to the Grand Mufti of Saudi Arabia, who criticized the Ashoura rituals in 2011, considering those performing them as "nonadherent to Islam.”

The Shiite-Sunni controversy over this religious occasion is present throughout the year, but increases as the 40-day mourning period and Shiite pilgrimage to Karbala approaches.

In Karbala, which is a holy city for Shiites, there are gold-plated domes, which IS and Sunni Wahhabi groups describe as “pagan graves that should be destroyed.” This has stirred the ire of Shiites.

The logic of considering others as infidels has escalated the sectarian conflict in Iraq, which went beyond its sectarian dimension and became political. Shiite and Sunni politicians have invested in this conflict in order to increase their popularity and show that they are defending the community they adhere to.

The Shiite-led government supported the commemorations by providing transportation services and nearly 30,000 security members to ensure the safety of the mourners, as the government considers this to be its responsibility to its citizens. The Iraqi government acts the same when it comes to Sunni religious commemorations. For instance, Prime Minister Haider al-Abadi participated in the Mawlid (birth of the prophet) commemorations on Jan. 3.

Despite this, Sunni politicians criticized the commemorations and considered that they stir sectarianism. Taha Lahibi, former Member of Parliament of the (Sunni) National Forces Alliance, called on the Shiites on Dec. 27, 2014, “to change their ideology because it is causing disasters in Iraq.”

In this regard, Shiite Member of Parliament Ali Allaq told As-Sumariya TV on May 10 that parliament Speaker Osama al-Nujaifi asked the parliament to limit and devitalize the Ashoura rituals.

Shiite Member of Parliament Ibtisam al-Hilali differentiated between violence and politics. She told Al-Monitor that while the actions of extremist forces are only designed for the sole purpose of “killing Shiites," she noted that “political statements against Shiite religious events are, however, designed to achieve electoral gains, by raising religious and sectarian feelings.”

According to Ali Hassan, a citizen from Babil, the Shiites therefore insist on practicing the Ashoura rituals. Hassan organized a condolences gathering on the main road between Babil and Karbala and offered food to pilgrims free of charge. He told Al-Monitor, “Hostilities against the Shiites have increased their commitment to their ideology.”

He said, “For 30 years, the Saddam Hussein regime banned the practice of Shiite religious rituals, in addition to killing and marginalizing them.”

Islamic researcher Sabah Hassan Kadhem talked to Al-Monitor about the insistence of Shiites, who enjoyed more freedoms post-2003, in practicing religious rituals and showing their force.

Kadhem said, “The Ashoura commemorations deliver a political message to extremists affiliated with IS and al-Qaeda. [The message] is that the Shiites are here to stay and that the war against them increases their commitment to their beliefs. The sectarian war did not start in 2003. Rather it was initiated by Saddam, when he killed thousands of Shiites and threw them in prisons and detention centers under his rule.”

The escalation of sectarian conflicts in the Middle East has turned religious events into an extremely sensitive issue and an opportunity for a show of force. This highlights the need for a religious and sectarian dialogue to promote peace and security in this inflamed part of the world.