As the pilgrimage of Arbaeen in Iraq grows in strength, so do its political dimensions. 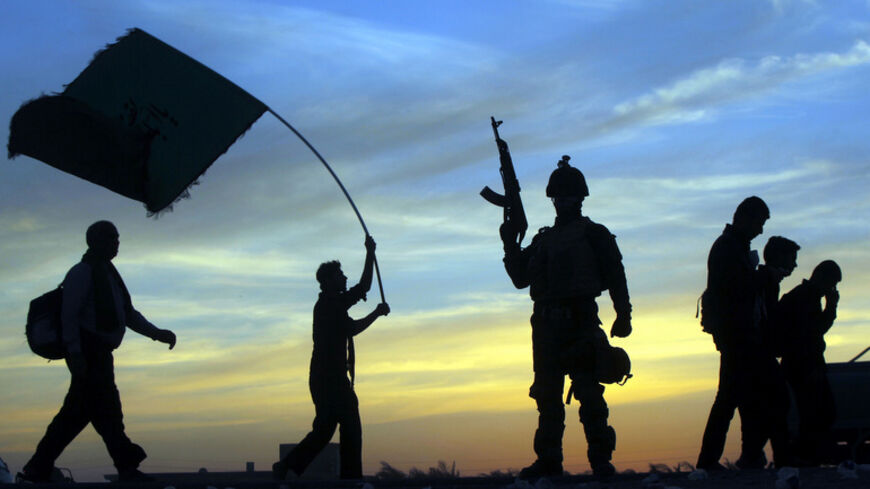 Shiite Muslim pilgrims walk to Karbala, ahead of the holy Shiite ritual of Arbaeen, in Najaf, Dec. 8, 2014. - REUTERS/Alaa Al-Marjani

NAJAF, Iraq — This year's pilgrimage of Arbaeen is different from previous years, as it now bears new political connotations in light of the developments in Iraq and the region. Arbaeen is a Shiite religious ceremony that commemorates the martyrdom of Hussein ibn Ali, the grandson of the Prophet Muhammad. Forty days after Ashoura, Shiites take part in a long procession that travels from different Iraqi cities to the holy city of Karbala, where Hussein was buried.

Iraqi Shiites have observed this ritual for hundreds of years under the different political regimes that have ruled Iraq. The ritual became a cultural celebration observed by a large number of Iraqi Shiites. In recent years, Shiites from other countries started to participate in this gathering.

Saddam Hussein's regime cracked down on Arbaeen and banned related gatherings for three decades, resulting in Shiite outrage in central and southern Iraq. At the first Arbaeen gathering after the fall of Saddam in 2003, about 2 million Shiite pilgrims marched to Iraq's south. Arbaeen crowds have grown with each subsequent year, with 20 million participating in 2014.

The regional situation has contributed greatly to the increase in Arbaeen pilgrims, whose gathering now bears messages between the conflicting forces. The ritual is no longer a purely cultural ceremony but has become something of a political protest. It's a show of force against those hostile to the rise of the Shiites in the region.

The first sign of the gathering's growing political angle followed the fall of Mosul to the Islamic State and the subsequent massacres of Shiite soldiers and civilians. Shiite mourning ceremonies have always been a way to express the injustice they suffer, as well as a tool to highlight their social power and express feelings of revenge. Iraqi sociologist Ibrahim al-Haidari told Al-Monitor that these rituals may be modified and adapted to contemporary events as a dynamic tool reflecting the collective will of the Shiite sect.

The second sign of Arbaeen's political shift was the regional message conveyed by Shiites to their opponents: The Shiite Crescent — a term coined by King Abdullah of Jordan — has become an undeniable reality that must not be underestimated. Sunnis had warned of this coming Shiite dominance, and now, Shiites have embraced their religious identity more deeply as a result of years of accumulated feelings of rejection at the hands of neighboring Sunni governments.

The third sign was a message exchanged between regional forces. Iran tried to exploit the Arbaeen gathering as a means to declare its victory in the region and to directly threaten its Sunni opponents not to hinder its regional expansion. Iran has completely opened its borders and lifted administrative procedures for entry and exit. Iraq reciprocated and more than a million Iranian visitors came to the country, including Iranian parliamentarians, heads of municipalities, high-level military commanders and religious figures.

The remarkable and unprecedented Iranian presence gave rise to a feeling of solidarity between Arab and non-Arab Shiites. Their arrival occurred amid significant fanfare, as Iraqis welcomed the Iranian visitors, who were given free accommodations.

However, the influx of Iranian visitors led to the emergence of unfamiliar sectarian phenomena in Iraq. Some Iranian visitors openly insulted Sunni religious symbols, prompting criticism from Shiite intellectuals who said these actions ignited sectarianism and disseminated hatred.

The famous Shiite poet Fares Harram wrote on his Facebook page: “I strongly condemn the Iranian group’s insults of Islamic religious symbols that millions of Iraqis believe in. I call on the government to take the necessary legal action against them, as they threaten civil peace in our country. With all due respect to the Iranian people and civilization, and knowing full well that these do not represent the [wider] Iranian people, I wonder whether Iran could no longer accommodate such acts and thus exported them to our land on a platter of blood!”

The march included fights and attacks among supporters of Shiite religious and political leaders, especially Iranians and Iraqis, some of which were witnessed by Al-Monitor. Each party published photographs of figures such as Iranian Supreme Leader Ayatollah Ali Khamenei and Iraqi Ayatollah Ali al-Sistani, among others. Also, some people tore down pictures of leaders whom they consider opponents.

Haidari said that the political exploitation of mourning rituals exposes such rituals to exploitation and distortion, and derails them from their noble founding principles. “The Hosseinieh rites and rituals [of Hussein ibn Ali, the third Shiite Imam] should be a common denominator that combines and unites all religions, sects and denominations in a bid to achieve a humanitarian goal — namely to stand by the values of goodness, truth, justice and the fight against evil and aggression,” he said.

Haidari also criticized the wasting of huge amounts of money during these rituals. According to him, these funds should be used to build schools, hospitals and orphanages. He said there are “exaggerated and fake popular aspects [to these religious gatherings], such as the visits of millions of people in Ashoura and the 40th day of Muharram, in which departments and institutions stop working for several days and stop their production. Add to this the spending of hundreds of millions that are supposed to be employed in useful fields.”

Haidari said that the act of tatbir — the striking of one's head with a sword as an act of mourning — is irrational. He proposed to replace it with blood donations for hospitals to be used for the sick and wounded. Some Shiite authorities agree with Haidari’s position. Iraqi cleric Sayyed Hussein al-Sadr and some of his supporters donate blood every year during Imam Hussein’s mourning march.