Iraq is struggling with the large number of Shiite pilgrims, at least 5 million — mostly from Iran — who entered Iraq over the last few days to attend the Arbaeen ceremony. 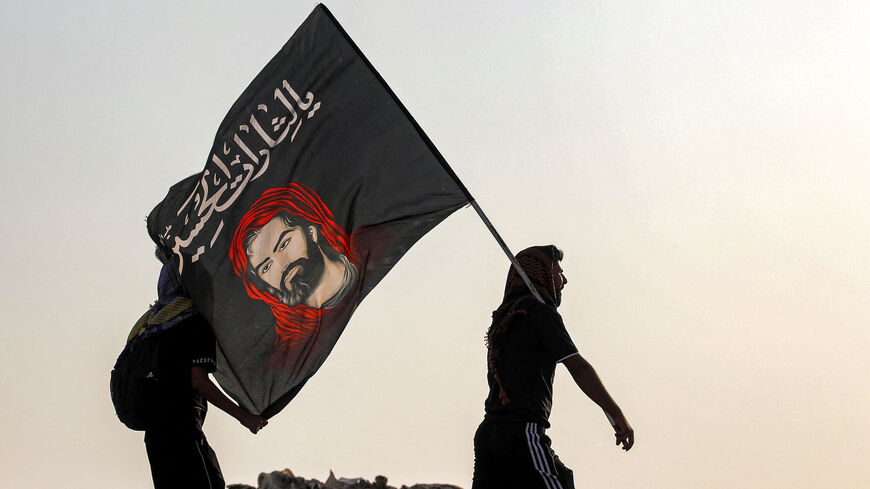 A Shiite Muslim pilgrim marches with a flag bearing the image of Imam Hussein and the Arabic slogan "Yalatharat al-Hussein" (those who want to avenge the blood of Hussein) while en route to Karbala from Nasiriyah in Iraq's southern Dhi Qar province on Sept. 5, 2022, ahead of the holiday of Arbaeen. - ASAAD NIAZI/AFP via Getty Images

Millions of Shiite pilgrims are coming to Iraq to participate in the Shiite religious observance of Arbaeen. While many have been traveling by land, using Iran-Iraq border crossings, these were shut today due to control the surge in inflows.

The holy day, which begins next Friday evening and lasts through Saturday evening, commemorates the 40th day after the Day of Ashura, the anniversary of the martyrdom of Imam Hussein ibn Ali, the grandson of the Prophet Muhammad.

This is the first year since the outbreak of the coronavirus pandemic that Shiite pilgrims can enter Iraq in large numbers and without restrictions.

About 5 million pilgrims have entered Iraq so far, and the number is rising significantly according to a source from Iraq's border authority.

The Iranian Interior Ministry announced that all borders with Iraq were closed today and called on Iranians to refrain from traveling to Iraq due to Iraq's inability to receive anymore pilgrims.

It also called on all Iranian pilgrims inside Iraq to return to Iran as soon as they finish the ceremony to open space for others to attend.

Iraq has opened five border crossings with Iran: Shalamcheh and Shaib in the south, Zurbatiyah and Khosravi in the middle, and Bashmaq in the north — which is under the control of the Kurdistan Regional Government.

According to a previous agreement between the two countries, Iranian pilgrims receive visas on arrival without pre-requests.

In addition to the great numbers of Iranian pilgrims, thousands of Afghan citizens as well are entering Iraq through Iran per a bilateral agreement between Iran and Iraq.

Iraq has had no diplomatic relationship with Afghanistan since the Taliban came to power last year. Therefore, Iraq has decided to receive Afghan pilgrims who obtained multiple-entry visas to Iran. They come to Iraq through Iran and return with the same visa.

This has put a great deal of pressure on Iraqi authorities who are managing the ceremony and pilgrims.

The Iraqi government had established a special committee under the guidance of Interior Minister Othman Ghanemi, with high-ranking members from other relevant authorities including the Health Ministry, border crossing authorities and others.

The majority of services, including accommodation, are managed by Iraqi volunteers who offer food, clothing and accommodations to pilgrims on their way to Karbala, where Imam Hussein's holy shrine is located.

Transportation, medical services, and electricity and other public services are the government's responsibility.

Arbaeen is the most important ceremony for Shiites in Iraq, and the majority of pilgrims come to Iraq on this date.

It is held on Sept. 17. The ceremony, however, takes place in about three weeks — two weeks before the date and a week after — as pilgrims mostly walk to the holy shrine from surrounding cities; some even use a longer track from far southern cities like Basra, Amarah and Nasiriyah.

So far this year there have been no no security challenges to the ceremony, unlike the years before the pandemic when the Islamic State organized attacks on Shiite pilgrims.

Arbaeen — with all of its challenges — has created a calm in Iraq amid an ongoing political crisis that began after the elections last October. Two weeks ago, rival Shiite groups — Sadrists and the Coordination Framework — clashed violently in the Green Zone, leaving more than 60 dead and almost a thousand injured.

The political crisis is expected to resume after Arbaeen, as both sides have become inflexible toward a political solution.