Are Shiites substituting Arbaeen for hajj?

Even though Arbaeen is attracting an increasing number of Shiite pilgrims, the annual pilgrimage is still overshadowed by the hajj in Saudi Arabia. 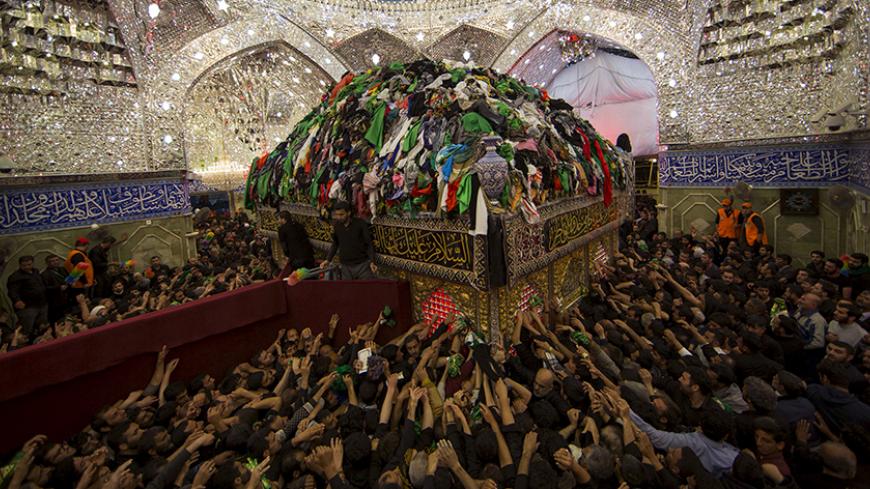 Shiite Muslim pilgrims reach out to touch the tomb of Imam al-Abbas located inside the Imam al-Abbas shrine to mark Arbaeen, in the holy city of Karbala, southwest of Baghdad, Dec. 3, 2015. - REUTERS/Ahmed al-Husseini

Ever since the fall of Iraqi dictator Saddam Hussein in 2003, Shiites have begun once again openly marking the annual mourning holiday of Arbaeen, with the number of people taking part in the ceremony surging each year.

Arbaeen, described as the world's largest annual pilgrimage, is a ritual that occurs 40 days after the day the third Shiite Imam Hussein bin Ali was slain by forces loyal to the second Umayyad caliph Yazid in A.D. 680. Hussein, who was the grandson of Prophet Muhammad, is highly cherished and commemorated among Shiites for his battle against the thousands of troops dispatched by Yazid to confront him and his less than 100 companions.

Each year, a few days before Arbaeen, Shiites from all over the world travel to Iraq to walk to the holy shrine of Hussein in the holy city of Karbala. Of note, followers of all branches of Islam venerate Hussein, and even some groups of Christians in Iraq regularly join the march to Karbala.

Last year, 27 million people reportedly took part in the ceremony from various countries, such as Turkey and Tajikistan. Iran is one of the countries that sends the most visitors to the ceremony, with more than 1.5 million pilgrims traveling to Iraq.

In past years, apart from the religious aspects, Shiites believe their participation in the ceremony has a challenging message for the Islamic State (IS): unity, power and readiness to confront the group.

Mohammad-Naghi Lotfi, the Friday prayer leader of Ilam in Iran, said on Nov. 9, “The epic of the march of Arbaeen in Iraq is the real fulfilling of unity and will of Shiites to confront takfiri groups and frighten them.”

Moreover, Arbaeen is considered a direct challenge to Saudi Arabia, which has been slammed by Iran for its “mismanagement” of the hajj, given the deadly stampede in 2015 that led to the deaths of a large number of pilgrims — including hundreds of Iranians.

Management of the pilgrimage in Iraq has nothing to do with the government, and the price of the trip is cheap, as a lot of volunteers on the path of the march to Karbala give free food and drinks to pilgrims. Plus, during the ceremony — which hosts a greater number of pilgrims than the hajj in Saudi Arabia — no one has been killed due to a stampede or any sort of mismanagement.

Mentioning the 2015 stampede in Saudi Arabia, Iranian news site Dana wrote on Nov. 7, “The marching is being done under the correct management, without any casualties. … The [widespread] presence of people in the Arbaeen ceremony [signifies to Saudi Arabia] that they should learn from this ceremony.”

The root of Saudi Arabia’s opposition to Arbaeen

On Sept. 10, Saudi-owned TV channel al-Wesal tweeted a video and wrote, “Muslims go to Mecca, Safavids go to Karbala.” Safavid, which refers to the medieval Iranian Safavid Empire, is a term commonly used primarily by Wahhabis to suggest that Shiites are more loyal to Iran and Iranians are not Muslims. Interestingly, the same word has been used by IS to describe Shiites as apostate. In this vein, Dabiq, the official magazine of IS, commonly refers to Shiites as “Rafida” or rejectionists.

As such, Saudi Arabia is fundamentally against the Arbaeen ceremony — an opposition that is rooted in its Wahhabi ideology. Wahhabis believe that visiting tombs and venerating saints are acts of polytheism. In fact, in 1801, Wahhabis from the Arabian Peninsula attacked and sacked Karbala. During the raid, Wahhabis killed thousands of locals, plundered the tomb of Hussein and destroyed its dome. Saudi historian Osman Ibn Bishr Najdi wrote, “Saud [son of 'Abd al-'Aziz and grandson of Ibn 'Abd al-Wahhab] set out with the divinely supported army. He made for Karbala and began hostilities against the people of the city of al-Husayn. The Muslims [the Wahhabis] scaled the walls, entered the city, and killed the majority of its people in the markets and in their homes. Then [they] destroyed the dome placed over the grave of al-Husayn. They took whatever they found inside the dome and its surroundings. They took the grille, which was encrusted with emeralds, rubies, and other jewels … different types of property, weapons, clothing, carpets, gold, silver, precious copies of the Qur'an.”

It is worth mentioning that the same type of destruction has been repeated by IS over the past few years. For instance, on July 4, 2014, IS members dug up and destroyed the grave of Prophet Younis (biblical Jonah) east of Mosul.

Do Shiites and Iranians prefer Karbala to Mecca?

In recent months, articles circulated in some Arab outlets claiming that Iran’s Supreme Leader Ayatollah Ali Khamenei had issued a fatwa asking Iranians to carry out the duty to perform the hajj in Karbala rather than Mecca. Of note, Iranian officials quickly denied these claims.

Apart from Iran’s rejection of the alleged fatwa, Shiite jurists and scholars are of the conviction that the hajj cannot be performed anywhere else but in Mecca. In fact, while performing the hajj is "wajib" (mandatory), visiting the shrine of Hussein is merely "mostahab" (recommended).

In fact, the hajj is so important in Islam that those who do not perform it — if they are healthy enough and can afford it — will not be considered Muslim in the hereafter. In this vein, Sheikh Al-Hurr al-Aamili, a prominent Twelver Shiite scholar (1624-1693) said that visiting the shrines of the Shiite imams cannot be used as a pretext for not carrying out the duty to perform the hajj. Moreover, Imam Muhammad ibn al-Bagher, the fifth Shiite imam, said, “If someone can afford to go to hajj but has sickness or disease, he should send someone else instead of himself to the hajj and pay the expenses.”