Iraq under pressure to open borders for Shiite pilgrims despite pandemic

While the Iraqi government attempts to prevent the spread of the delta variant from Iran, there is internal and external pressure to open its borders for Shiite pilgrims to visit the holy cities of Karbala and Najaf. 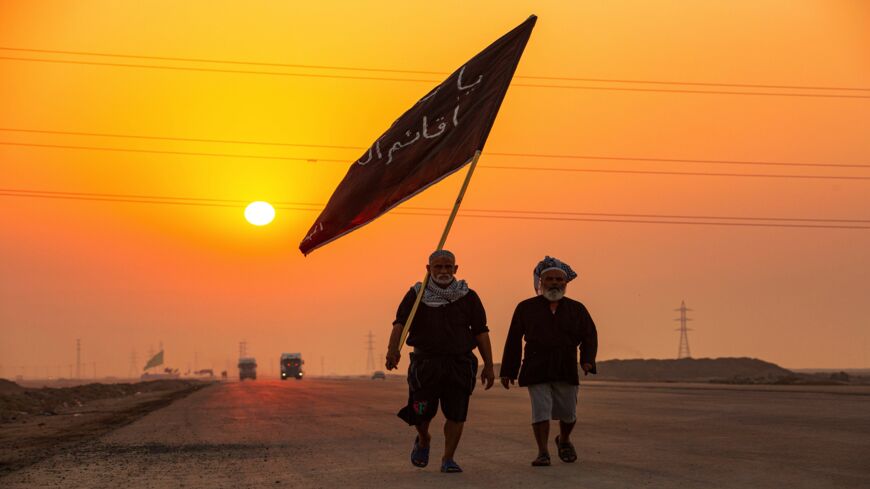 Iraqi Shiite Muslim pilgrims who began their march from the southern port city of al-Faw walk through Basra on their way to the holy city of Karbala ahead of the Arbaeen religious festival on Sept. 17, 2020. Each year, pilgrims converge in large numbers to the holy Iraqi cities of Najaf and Karbala ahead of Arbaeen, which marks the 40th day after Ashura, commemorating the seventh-century killing of Prophet Mohammed's grandson Imam Hussein. This year, however, Iraqi authorities prevented foreign visitors from entering Iraq to participate due to the coronavirus crisis. - HUSSEIN FALEH/AFP via Getty Images)

NAJAF, Iraq — Millions of Shiite Muslims from across the world annually gather in Karbala on Ashura, the 10th day of Muharram on the Islamic calendar, to commemorate the killing of Imam Hussein. But this year, due to pandemic restrictions similar to 2020, only a small number of pilgrims have been able to enter Iraq to attend the ceremonies in the holy cities of Karbala and Najaf.

Ashura will continue for two months. Some countries — and many Iraqi business owners — are urging the Iraqi government to open its borders to all pilgrims.

In response to Pakistan's request to facilitate visas to its Shiite citizens to enter Iraq and increase the number of visas available to them for the pilgrimage, Iraqi Foreign Minister Fuad Hussein during his visit to Islamabad on Aug. 11 said Iraq would soon announce a new visa policy for Shiite pilgrims addressing Pakistan's request.

Last February, the Iraqi government launched a program waiving visa entries for 36 Western countries to further attract tourism and investment. Iran has since pressed the Iraqi government to also include it in the waiver program in order to allow easier passage of its citizens to the holy sites. While in office, former Iraqi Prime Minister Adel Abdul Mahdi had waived visa fees for Iranian visitors to Iraq.

During numerous meetings with Iraqi Prime Minister Mustafa al-Kadhimi, Iranian Ambassador to Iraq Iraj Masjedi demanded the waiver of visa fees for Iranians, according to his statement to the Iranian official agency, IRNA. The Iraqi government refused the request due to the widespread pandemic in Iran.

Then last July, Iran demanded a million visas for the pilgrimage after its demand for a total visa waiver was rejected.

Iranian Shiites often travel by crossing the Iraqi borders at Shalamcheh in the south, Mehran in the middle or Khosravi in the north. All three borders are still under strict pandemic restrictions. That’s why some Iranians were entering Iraq through Kurdistan to make their way to the south to visit Karbala and Najaf. But Kurdish authorities also shut down the border crossings for Ashura beginning Aug. 15 onward due to the rapid spread of the delta variant in Iran, which has claimed more than 100,000 lives. Kurdish authorities issued a statement on Aug. 15 saying “the decision came because a large number of citizens and would-be Iranian travelers gathered in Qasr-e Shirin city behind the Iraqi border.”

Iraq is also witnessing a new wave of the pandemic, and the number of COVID-19 cases is expected to rise significantly — especially during the Arbaeen ceremony on Sept. 27, which is the busiest time of the Shiite pilgrimage. During Arbaeen, the 40th day after Ashura, millions of Shiite pilgrims travel by foot toward Karbala. Iraq usually hosts about 20 million tourists during Arbaeen.

The Arbaeen pilgrimage, which was banned under Saddam Hussein's regime, has since grown steadily and generates significant income for Iraq’s private sector.

Many business owners are also pressuring the government to ease the border crossing. Ali al-Saffar, a hotel owner in Karbala, told Al-Monitor, “Last year because of the pandemic, my business was on the verge of bankruptcy; many of my friends shut their restaurants and cafes. We can't afford to stay afloat if the government decides to keep the border closed.”

Although easing visa requirements for pilgrims and opening the borders carries the potential spread of the delta variant in the country, it is also an excellent strategy to boost the economy, which was hit hard in 2020 due to the pandemic.

This has rallied many in Iraq's parliament to advocate for reopening the borders. In an interview with Al-Monitor, member of parliament Khaled al-Jashami said, “I suggested that the prime minister grant more visas to visitors, as every visitor who enters Iraq will contribute to the economy, provide more cash flow to the private sector and fund Iraq's treasury from their entry whether directly or indirectly.”

Although potential economic benefits from the pilgrimage are many, if restrictions are not implemented then a fourth wave of the pandemic across Iraq would hurt the country's already fragile health system and pose greater economic consequences.

Last Tuesday, Karbala’s Health Directorate stated "the directorate will distribute more than 50 monitoring teams in all areas of Karbala to follow up on the food and water distributed to visitors [and will monitor] shops, restaurants and their commitment to preventive measures.” Then the Health Directorate warned of fines of up to 5 million dinars (approximately $3,500) and possible shutdowns of businesses if instructions are not followed and restrictions are violated.

Parliament member Jashami expanded on his ideas of preventing a fourth wave. “I also suggested that the prime minister enforce obligatory vaccination for all workers in tourist facilities and only allow the entry of vaccinated tourists who also can provide PCR tests within 72 hours prior to their entry,” he said. He added the Iraqi government can also facilitate the entry of visitors across 20 days before Arbaeen rather than allowing millions of people to enter the country within a few days. By implementing this strategy, the government will be more effective in enforcing the measurements and managing the crowds walking to Karbala.

Given Iraq’s economic crisis and desperate need for cash, the government has no choice but to eventually open its borders while simultaneously imposing new measurements and restrictions to prevent a fourth wave of the pandemic and its economic impacts.