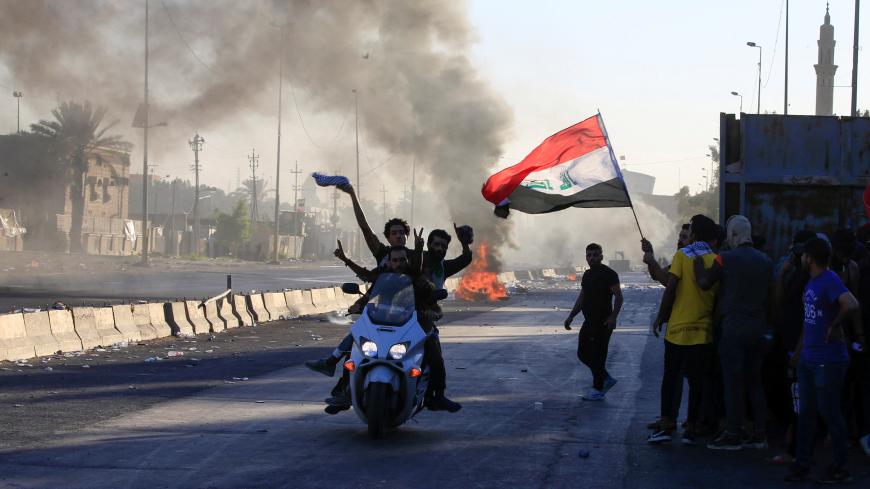 The death toll of the recent Iraqi protests has reached more than 120 and more than 6,000 have reportedly been wounded. Following Shiite leader Ayatollah Ali al-Sistani's condemnation of the Iraqi government for using violence against protesters, Iraqi Prime Minister Adel Abdul Mahdi formed a committee of ministers and security officials on Oct. 13 to investigate.

“The government and its security apparatuses are responsible for the heavy bloodshed that occurred in the demonstrations of the past few days, whether of innocent citizens or the security elements charged with dealing with them. The government cannot shirk this responsibility,” Sistani's representative Sheikh Abdul Mahdi al-Karbalai said while leading Friday prayers on Oct. 11.

While Karbalai expressed Sistani's deep sympathy with the protesters and their demands, he demanded that "the government and the judiciary conduct a credible investigation into all that took place in the demonstrations and then disclose to the public who ordered or started shooting at demonstrators and others as well as their affiliations, and all this must be done within a certain period, such as two weeks."

The head of Supreme Judicial Council has called for an immediate investigation and the Defense Ministry will conduct its own investigation into the violence, with a spokesman promising to bring all the perpetrators to justice.

However, there is little transparency around these processes and it is unclear how the investigations will take place, how the different bodies will coordinate and who is directing the committees.

There have been reports in the local Iraqi media that head of the Popular Mobilization Units and national security adviser Falih al-Fayyadh will head the Prime Ministry's investigation committee. Shiite cleric Muqtada al-Sadr, who leads the largest parliamentary bloc of Sairoon, complained that the “executioner cannot be the investigator.”

Fayyadh had previously slammed the protest organizers, calling them “conspirators” and promising to bring them to justice.

Sadr had called upon Abdul Mahdi during the protests to resign and Sistani's condemnation renewed calls for the prime minister's resignation.

Forat Tamimi, a member of the Hikma opposition party, joined Sadr on Oct. 13, saying, “If the government continues dealing with the protests in the current framework, it will not be able to overcome the protests,” suggesting that “early election” is the only solution that can bring about a competent government.

Al-Monitor learned from a source close to Sistani's office that Abdul Mahdi had sent several messages to Sistani asking his support to calm the streets and help the government to control the situation. But Sistani refused, saying that he supports the protesters' demands and places all responsibility on the prime minister.

The same source told Al-Monitor that commander of Iran's Quds Force Qasem Soleimani is in Najaf since last week. He has warned Sistani that he should make it clear whether he is with the protesters or with the government. Sistan has already expressed his full support to the protesters' demands.

Sistani himself is facing a difficult time as criticism against him rises among Iraqis. Although he has long criticized successive Iraqi governments for failing to build a functional state and provide sufficient services to the citizens, many Iraqis consider him the mastermind of the Iraqi political process since 2003. Therefore, he is trying to distance himself from the government as much as possible, pressuring behind the scenes for reforms.

Although the protests have calmed somewhat due to the observance of Arbain on Oct. 20, it will be renewed if the government fails to address at least some of the protesters' demands.

Meanwhile, the government is taking strong security measures. Internet access is cut or very slow for most of each day. Security forces have been arresting activists over the last week and are ready to respond to incidents.

In such circumstances, Abdul Mahdi is unlikely to withstand the protests and the parliamentary coalitions Sairoon and Fatah, which brought him to power, will have no choice but to replace him with a new prime minister.