Thousands of angry young Iraqis took to the streets, calling for dignity, transparency and services. 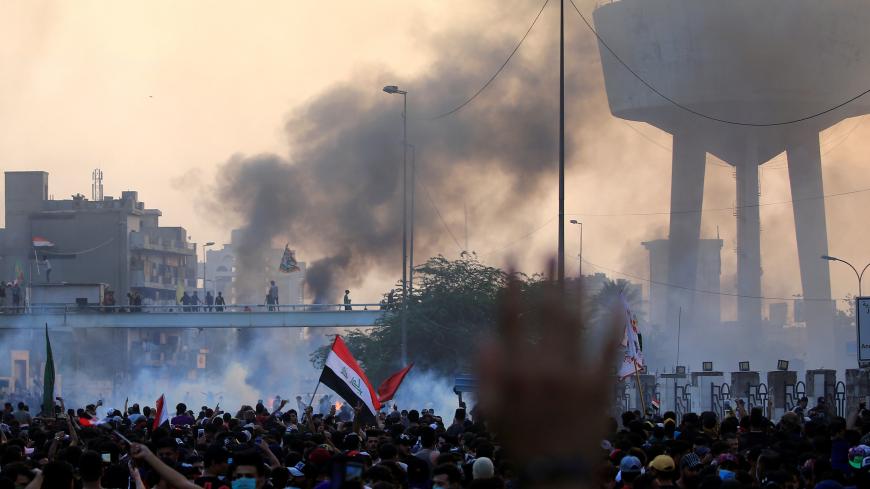 Demonstrators gather as they take part in a protest over unemployment, corruption and poor public services, in Baghdad, Iraq, Oct. 2, 2019. - REUTERS/Thaier al-Sudani

As violent protests continued for a second day in Baghdad and other southern Iraqi cities, head of the Popular Mobilization Units (PMU) Falih al-Fayyadh arrived in Washington to meet with US Defense Secretary Mark Esper Oct. 2. This comes in conjunction with the US Embassy in Baghdad urging all parties to avoid using violence.

The mass protests erupted on Tuesday. According to the Iraqi government, at least two people were killed and more than 200 wounded, including 40 security officers, during the first day of protests. Security forces used tear gas, water cannons and live fire to disperse demonstrators.

In a statement, Iraqi Prime Minister Adel Abdul Mahdi accused the protesters of rioting and called on all parties to calm down.

Former Iraqi parliament member and secretary-general of the Civic and National Forces Coalition, Shirouq Abayachi, who attended the protests and provided assistance to the injured people in the hospital, told Al-Monitor the number of casualties is much higher than what the government has reported. She said the number of dead has reached more than 20 and the wounded more than 500.

Iraq witnesses mass protests every year, which often end in violence. Protests are usually organized by the Sadrist movement or other opposition parties, but this time the protests were spontaneous. Most participants are young people, and they have used social media for organization and coordination.

Protests erupted again Oct. 2 in several suburbs in Baghdad, including Sadr City and Shaab, and other Iraqi cities, including the Shiite holy city of Karbala. Al-Monitor saw a number of burning tires and a heavy presence of security forces in different areas of Baghdad.

There are conflicting figures when it comes to the number of casualties, but the latest reports placed the number of dead from the two days of protests at nine.

Parliamentary speaker Mohammed al-Halbousi called for an impartial investigation and for the security forces to show restraint and not use excessive force with demonstrators.

Prominent Shiite clerics Muqtada al-Sadr and Ammar al-Hakim expressed support for the protesters' demands and criticized the prime minister for his failure to meet those demands and appropriately deal with the protests.

Sadr and Hakim are working on forming a strong opposition to Abdul Mahdi's government, even though they both were essential elements of forming said government in 2018.

Following the outbreak of the violent protests, the Iraqi parliament witnessed the formation of the Parliamentary Opposition Front, which includes members of Hakim’s Wisdom bloc, Sadr’s Sairoon Alliance, former Iraqi Prime Minister Haidar al-Abadi’s Nasr coalition and others. The Parliamentary Opposition Front issued a statement Oct. 2 to express full sympathy with the protesters’ demands; to call upon the parliament to convene a special session; to invite the prime minister to discuss the matter; and to find solutions and force the government to implement them.

Abayachi described the current protests as the worst in terms of the government’s reaction. She told Al-Monitor, “The main drive behind the protests is the misery of the Iraqi people’s reality and the clear failure of the Abdul Mahdi government in managing the Iraqi government and providing any solution for the long-term issues.” She asked Abdul Mahdi to fulfill the promise he made at the beginning of his term, that he would resign if he failed to address Iraq's issues.

Abayachi said the protesters are ordinary, young Iraqis who are mostly under 20 and do not have anyone to turn to, so they take to the streets.

Abayachi emphasized that the demonstrators feel the Iraqi government has failed to treat them with dignity.

Many protesters called for a homeland, or watan, in Arabic, and some also shouted slogans against Iran for interfering in Iraqi matters and supporting failed parties in Iraq.

The current protests were preceded by several events that fueled anger among the public.

Last week, the prime minister dismissed the deputy commander of Iraq's counterterrorism bureau, Abdul-Wahab al-Saadi, provoking anger and discontent among Iraqis. Many protesters carried photos of Saadi at the protests.

Saadi's dismissal caused discontent in several political parties, including the National Wisdom Movement, the Sadrist movement and Osama al-Nujaifi’s Iraqi Decision Coalition, raising suspicions over Iranian interference in his dismissal, as he was independent of Iranian proxies in Iraq, whether in the Iraqi army or the PMU.

In another incident, the Iranian ambassador in Baghdad, Iraj Masjedi, said in a TV interview with Dijlah channel last week that Iran would target the United States in Iraq if the United States threatened Iran. Iraqis took this as clear Iranian interference in Iraqi matters.

Earlier this week, there were reports that members of an Iraqi diplomatic delegation were harassed and arrested in the Iranian city of Mashhad, angering Iraqis and leading Iraq’s Foreign Ministry to close its consulate in the city.

Al-Monitor learned from a high-ranking source close to Ayatollah Ali al-Sistani that in a meeting between Sistani's son, Mohammad Reza Sistani, and the commander of Iran's Quds Force, Qasem Soleimani, Mohammad Reza warned Soleimani that if Iran continues to deal with Iraq as it has, the Iraqi streets will rise up.

Under such circumstances, if the protests continue, Abdul Mahdi will not be able to continue his term and will be forced to resign to placate protesters and calm the streets.

by Murielle KASPRZAK and Joseph SCHMID | AFP | May 26, 2022
END_OF_DOCUMENT_TOKEN_TO_BE_REPLACED