Following US warning, Iraq steps up pressure on outlawed militias

A warning from US Secretary of State Mike Pompeo has spurred Popular Mobilization Units factions to take actions against outlawed militias that are attacking foreign missions and troops. 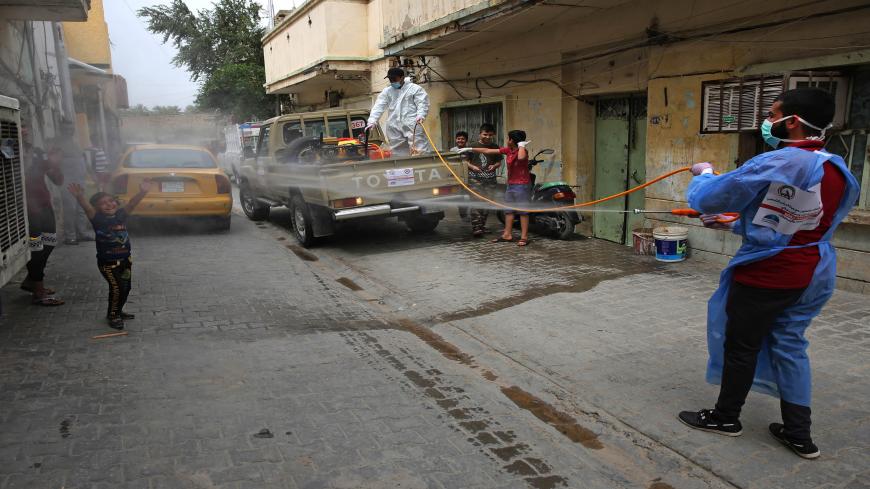 Members of the Popular Mobilization Units disinfect a street in the western Washash district of Baghdad, as part of measures against the coronavirus pandemic, Iraq, April 6, 2020. - AHMAD AL-RUBAYE/AFP via Getty Images

The US warning to the Iraqi government to take action against the militias in the country has shaken up the political scene.

There have been a series of statements and a flurry of diplomatic exchanges in response to the message from US Secretary of State Mike Pompeo to Iraqi President Barham Salih that all attacks on foreign missions and troops must stop, or else the United States would consider closing its embassy and targeting all militias involved in attacks against the United States.

In an urgent meeting called by Salih Sept. 27, and attended by Prime Minister Mustafa al-Kadhimi, parliament Speaker Mohammed al-Halbusi and President of the Supreme Judicial Council Judge Faiq Zaidan, the attacks on foreign missions and the urgent need to protect them from further assaults were discussed.

Following the US warning, head of the Popular Mobilization Units (PMU) Falih al-Fayadh and head of the PMU-affiliated Fatah bloc Hadi al-Amiri, among many other Iraqi politicians, have condemned the attacks against foreign missions and troops.

Leader of the Sadrist movement Muqtada al-Sadr asked Kadhimi to form a security committee to draw up a plan for stopping the attacks and overseeing this process.

Kadhimi and Halbusi both welcomed Sadr's proposal in separate statements.

Although the Iranians' public response was tough, asking the Iraqi government to force out the Americans from Iraq as a punishment for the assassination of Iran's top commander Qasem Soleimani, the Iranian government sent a delegation of high-ranking military representatives, headed by Gen. Qadir Nedhami, deputy chief of staff of the armed forces for international affairs, to Baghdad.

Thus it seems that Iran is interested in reaching a security agreement with Iraq that allows the latter to rein in its outlawed militias. However, Iranians have not taken any serious actions in this regard.

On Sept. 25, Iran's Supreme Leader Ayatollah Ali Khamenei wrote on Twitter, "Imam Hassan (peace be upon him) avoided entering a military war with the enemy … and he stopped the military war with him to start his political war, his cultural war, his media war and his Islamic war."

This message is considered a preparation for entering negotiations with the United States, which solving the militias issue in Iraq might be a part of it.

The PMU are now under heavy pressure from all directions, to push the organization to distance itself from the outlawed militias that are using the PMU as a cover for their attacks against foreign missions and troops.

These efforts have been already successful it seems, as the factions within the PMU have been divided sharply and the outlawed militias are feeling the pressure for the first time, complaining about "betrayal."

Kataib Hezbollah and other militias slammed Pompeo for issuing a warning to Iraq and criticized Iraqi politicians and their friends among the PMU who took action against attacking foreign missions and troops following the US warning.

Ashab al-Kahf, which is one of the recently formed factions, concluded its statement, received by Al-Monitor, with this complaint: “Our God, the folks have let us down and betrayed us and left us on the battlefield alone.”

The militias announced that they are continuing their attacks against the United States.

Qais Khazali’s Asaib Ahl al-Haq said in a statement that they are not considering the US Embassy as a diplomatic mission, as “it has turned into a military base of an occupying force.”

However, he said attacking the US Embassy is not beneficial at this time, but also forming an investigation committee for those attacks that took place only encourages the United States to prolong its stay in Iraq.

Muqtada Sadr had asked to form the committee mentioned by Khazali.

On Sept. 13, top Shiite cleric Ayatollah Ali al-Sistani asked the Iraqi government to impose its full control on the militias and confiscate any type of illegal weapons outside of the state.

Sunni and Kurdish political forces have been clear in opposing the decision to expel foreign forces from Iraq during this sensitive time and have been supporting Kadhimi in his campaign against the outlawed militias.

In the same vein, the four pro-Sistani factions within the PMU have been trying hard to leave the PMU and join one of the official forces of the state.

In the latest effort, a delegation from the Abbas Combat Division, which is one of the pro-Sistani factions, led by Maytham al-Zaidi visited the headquarters of the Counter-Terrorism Service and met with its commander Abdul Wahhab al-Saidi.

Under these circumstances, it is very important to exploit the current situation in a way that marginalizes the militias and unite all internal and external efforts in putting them under the control of the state, and stopping them from dragging Iraq into more instability and isolating the country from the international community, especially now that Iraq needs support to survive the economic and security challenges.

Closing the US embassy in Baghdad would turn the tables against the prime minister and his allies who have been making steady progress in containing the militias.