Two women and three children were killed at a Baghdad home on Monday as the United States threatens to pull its diplomatic mission. 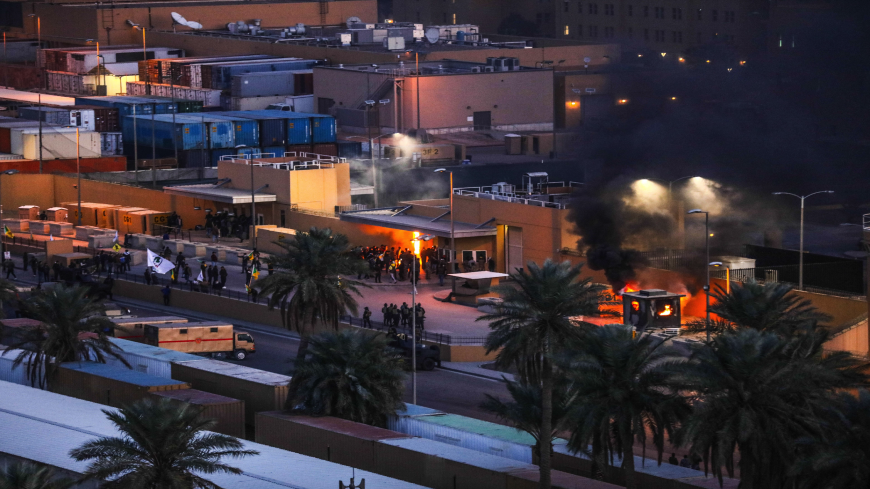 A handout picture received from the US Embassy in Iraq on Dec. 31, 2019, shows smoke billowing from a sentry box at an entrance of the embassy in the capital, Baghdad, after supporters and members of the Hashid Shaabi military network breached the outer wall of the diplomatic mission during a rally to vent anger over weekend airstrikes that killed pro-Iran fighters in western Iraq. - US EMBASSY IN IRAQ/AFP via Getty Images

Three children and two women were killed by a rocket strike on a home in a Baghdad neighborhood on Monday.

The incident, announced by Iraq’s Security Media Cell, comes amid threats by US officials to withdraw Washington’s embassy in Baghdad if the militia attacks are not stopped by Iraq’s security forces.

US Secretary of State Mike Pompeo last week warned Iraqi President Barham Salih that the United States would consider withdrawing its embassy in Baghdad and may confront the militias unilaterally if their attacks on foreign diplomatic missions and convoys are not halted by Iraq’s security forces.

Word about the warning led to divergent calls by Hashid Shaabi factions. Falih al-Fayadh and Hadi al-Amiri, who leads the Hashid-affiliated Fatah political bloc, called for an end to the attacks on foreign troops and diplomatic sites, as did influential Shiite cleric Muqtada al-Sadr.

Qais al-Khazali of Asaib Ahl al-Haq, however, legitimized attacks on the US Embassy by saying it functions as “a military base of an occupying force.”

While it is not immediately clear what prompted the American gambit, such an embassy closure would normally take up to three months, The Washington Post reported.

Militia attacks on personnel connected to the US-led military coalition’s presence in Iraq have ticked up in recent months. A British convoy was hit with a roadside bomb earlier this month, drawing rare condemnation from Iran’s Foreign Ministry.

Iran has backed a number of the Shiite militias in Iraq for years. But despite Tehran officials’ renewed threats of revenge over the US assassination of Maj. Gen. Qasem Soleimani in January, Supreme Leader Ayatollah Ali Khamenei signaled last week that Iran prefers softer tactics rather than outright war with the United States. Iranian Foreign Minister Mohammad Javad Zarif on Monday, however, tweeted in praise of Grand Ayatollah Ali al-Sistani's role in "preserving [Iraq's] sovereignty" and "getting rid of the occupation forces and building a new Iraq."

Killing Soleimani is believed to have weakened the Islamic Revolutionary Guard Corps’ grip on its preferred factions in Iraq, and it is less clear today that Iran can adequately reign them in, even if desired.