US shakes up Iraqi factions with reported warning on militias

The Trump administration has warned Iraqi President Barham Salih that it could close its US Embassy in Baghdad if the militias' attacks against its bases and convoys continue. 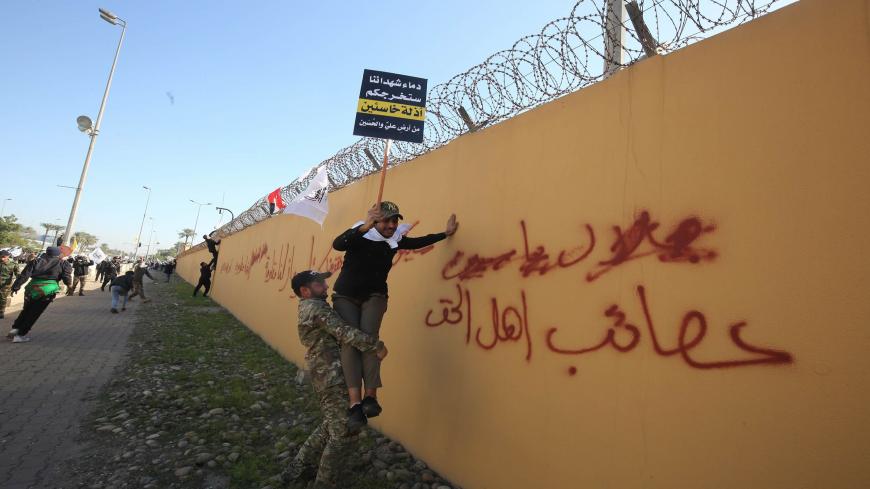 A member of an Iraqi Shiite paramilitary group helps a fellow protester holding a placard denouncing the United States climb on the outer wall of the US Embassy in the Green Zone during a demonstration, Baghdad, Iraq, Dec. 31, 2019. - AHMAD AL-RUBAYE/AFP via Getty Images

As the attacks against US and other foreign missions and bases in Iraq continue, the United States is warning the Iraqi government that it will take action against the militias involved in the attacks if it fails to do so itself.

A source attending a meeting called by Iraqi President Barham Salih, attended by many Iraqi political and faction leaders, told Al-Monitor that Salih told the participants that he had received a letter from US Secretary of State Mike Pompeo warning Iraq that if the attacks against the United States do not stop, it will close its embassy in Baghdad and target all involved militias without distinction.

Former Iraqi Foreign Minister Hoshyar Zebari confirmed what the source had told Al-Monitor, when he wrote on Twitter Sep. 24, “Recent stern warning by @SecPompeo to #Iraq-presidency is the most serious threat to Iraq stability. #Iraqi leaders have to rise to the challenges posed by armed militia to target #US diplomatic & military installations. Iraq has to stop this carnage & act responsibly.”

Following the meeting, a fierce debate took place between a group of militias supporting the attacks against the United States and other foreign missions, on the one hand, and head of the Popular Mobilization Units (PMU) Falih al-Fayadh and head of PMU’s Fatah bloc Hadi al-Amiri, on the other.

Fayadh and Amiri took strong action against the militias, asking them to stop all attacks, since the United States has already started withdrawing its troops from Iraq. They warned them that US actions might include bombing the militias' bases.

Moreover, it seems that Fayadh and Amiri are both afraid of getting on the US blacklist, especially as Prime MInister Mustafa al-Kadhimi is gaining traction at home and internationally for cracking down on militias not under state control.

In a positive response to the US message, the Fatah bloc issued a statement condemning the attacks against US and British convoys, demanding providing full protection to the foreign missions in Iraq.

Fayadh also issued a statement condemning any attacks in the name of the PMU, assuring that the PMU is a legal security force under full supervision of the commander in chief of the armed forces.

According to Fayadh's statement, the leader of the 18th Brigade known as Saraya al-Khorasani, Sayyed Hamed al-Jazaeri, has been fired; Ahmed al-Yaseri has replaced him. In addition, leader of the 30th Brigade, for the Shabak in the Ninevah Plains, Waad Qaddo, has been replaced with Zain al-Abedin Kheder.

The two factions have been accused of attacking the protectors and minorities in the Ninevah Plains, respectively.

Kadhimi has been making a series of changes in the government’s security bodies, including the appointment of former Defense Minister Khaled al-Obaidi as head of the operations center in the inteligence service and former Interior Minister Qasim al-Araji as the new national security adviser.

Bahaa Abdul-Hussein, director of Qi Card company, was arrested attempting to leave the country with the help of Shebl al-Zaidi, secretary-general of Kataib al-Imam Ali.

Following the arrest, two top officials at Baghdad airport including the head of the passport section were fired and arrested by security forces. More arrests in this case are expected in the near future.

However, these actions do not seem to be enough to stop the militias from attacking foreign convoys and bases, which is happening on a daily basis currently.

For the first time, the Iranian Foreign Ministry condemned Sep. 17 the attack on its rival’s diplomatic missions after the attack on the British convoy. It seems that some of the elements within the militias are no longer under the control of Iran, as was the case during the rule of Iran's top commander Qasem Soleimani.

In fact, the absence of Soleimani was not only the removal of a commander, but it was the collapse of an entire system that relied on him personally.

However, Iran needs to regain control over its elements in Iraq in order to use them as a card in future negotiations with the United States.

On the other hand, closing down the US Embassy in Baghdad would definitely create a vacuum that can be used by Iranians in Iraq, similar to what happened in 2018 when the United States decided to close its consulate in Basra.

In fact, there are many political and diplomatic tools for the United States in the current circumstances that can be used to put an end to the militias' attacks. Among them, opening a dialogue with some of the leaders close to the militias like Amiri and Fayadh is an important step that should not be disregarded. Figures like them with one foot in politics and the other in the PMU know very well the consequences of the closing of the US Embassy, especially in this very difficult economic situation.