Iraqi Prime Minister Mustafa al-Kadhimi is seeking to reorganize the Popular Mobilization Units under the framework of the PMU law. 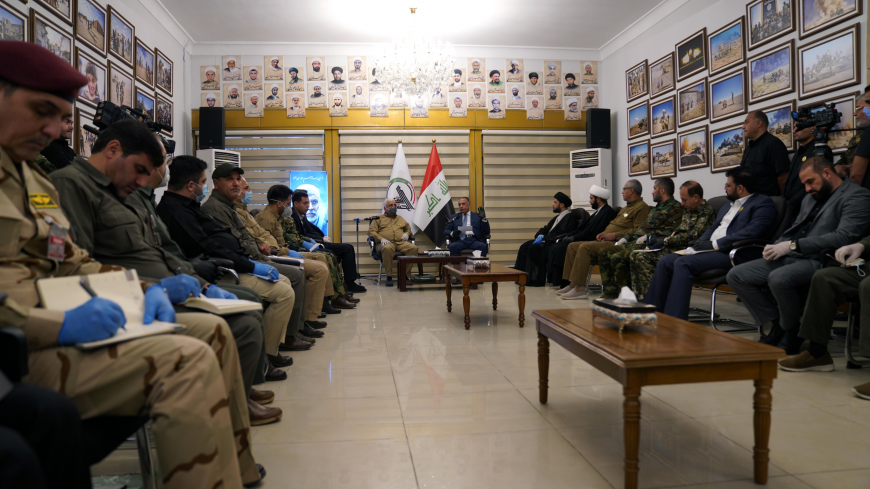 Iraqi Prime Minister Mustafa al-Kadhimi (in center, to right of flags) meets with the head of the Popular Mobilization Units, Faleh al-Fayadh, and other PMU leaders in Baghdad, May 16, 2020. - Iraqi prime minister's media office/via REUTERS

Iraqi Prime Minister Mustafa al-Kadhimi faces a difficult task in implementing his reform plan for the Popular Mobilization Units organization and bringing its various military factions under full control of the Iraqi state. He has started approaching PMU leaders, but reining in the organization will not be an easy task.

In his first days in office, Kadhimi took a few actions against the PMU. He ordered security forces in the southern province of Basra to close the Thar Allah al-Islami militia headquarters and arrest its leaders for shooting at protesters; one demonstrator had wound up dead. Security forces also arrested Maytham al-Okaili, who is a prominent member of Saraya al-Khorasani, on May 21. Okaili was accused of forming a gang and being involved in abducting and blackmailing several citizens. Saraya al-Khorasani is one of the top pro-Iran factions in the PMU and is led by Sayyed Hamed al-Jazaeri. It is one of the militias that have been accused by protesters of having taken part in killing and abducting demonstrators.

Kadhimi visited the main PMU office May 16 to break the ice. He praised the PMU for its military campaign against the Islamic State (IS) after the Sunni militant group seized a large chunk of Iraqi territory in 2014. While IS no longer holds territory, it has started a new wave of terrorist operations in the country.

The visit was a trust-building attempt that was welcomed by PMU leaders, who offered a PMU uniform to Kadhimi and asked him to put it on as a sign of closeness between the prime minister and the PMU.

However, the honeymoon did not last long. On May 19, a Katyusha rocket hit the Green Zone next to the British Embassy in the first such attack since Kadhimi took office May 6. The rocket launcher was found later on Palestine Street, where several PMU headquarters are located.

Also, soon after the prime minister's visit, Jawad al-Telbawi, a prominent leader in Asa'ib Ahl al-Haq, slammed Kadhimi for his words about the PMU. Kadhimi had praised the PMU forces and called them “children of Gilgamesh and other heroes of Iraqi history before and after Islam.” Telbawi tweeted, “We are not children of Gilgamesh and we are not proud of being related to him. We are children of Ali and Hassan and Hussein and we are students of the school that teaches Hayhāt minnā l-dhilla (Never to humiliation)." This was in reference to a famous saying from the third Shiite imam, Hussein, who is the inspiring symbol of the Shiite militant movement and who died in the battle for Karbala in the year 680.

In the same vein, and in celebration of Quds Day on May 22, Baghdad and other central and southern cities have been filled with posters of Iranians —  Islamic Republic founder Ayatollah Ruhollah Khomeini, Supreme Leader Ayatollah Ali Khamenei, Quds Force commander Esmail Ghaani and former Quds Force commander Qasem Soleimani, who was killed by the United States on Jan. 3. There are also posters of Abu Mahdi al-Muhandis, the PMU military leader who also was killed Jan.3, and other leaders of pro-Iran forces in Iraq and the region.

The relationship between Kadhimi and Iran-backed military factions in the PMU has been rocky since Kadhimi was appointed as chief of the intelligence service in 2016. The factions were the greatest obstacle when it came to Kadhimi's being approved as prime minister; still, a pro-Iranian PMU leader, Hadi al-Amiri, participated in the ceremony when Iraqi President Barham Salih designated Kadhimi to form a government, as a sign of respect.

In his visit with the PMU laders, Kadhimi said the PMU is an Iraqi institution under the Iraqi state. “The PMU is for Iraq and all Iraqis, it is not for anyone else. … PMU loyalty is to Iraq,” he added.

He also emphasized the role of top Iraqi Shiite cleric Ali al-Sistani in forming the PMU, which was read as criticism against some PMU factions that express loyalty to the Iranian supreme leader.

Some pro-Sistani PMU factions left the PMU a few weeks ago after long disputes with the other part of the PMU. Adel Abdul Mahdi announced in his last days in office as prime minister that these factions were to be under his direct supervision until a new home was prepared for them.

Kadhimi tried to unite the PMU again, but giving more support to the pro-Sistani factions in order to provide balance in the organization.

Kadhimi’s good relationship with Sistani will offer him a chance to reform the PMU, but controlling the pro-Iran factions will remain a serious challenge.

The only way to rein the PMU is to implement the PMU law passed in 2016 and the 2019 PMU decree issued by Abdul Mahdi. Kadhimi emphasized the necessity of implementing the PMU law, encouraging PMU militias to submit to it. “Protecting you is my responsibility. … The PMU law is the framework that protects the PMU,” he said.

Several pro-Iran PMU factions participated in the 2018 elections and formed the second-largest coalition, Fatah, despite the attempts by the then prime minister, Haider al-Abadi, to prevent this under the PMU law. Indeed, Amiri is the leader of Fatah. Many factions also are involved in economic activities in the country.

Finally, Kadhimi's achievements when it comes to the PMU will clearly depend on his ability to fully implement the PMU law, which would change the nature of many factions from religious militias to state military forces. This will not be not an easy or short task.