The battle to rein in armed militias outside state control has been a long and challenging process, but the Iraqi prime minister is gathering political support for his efforts. 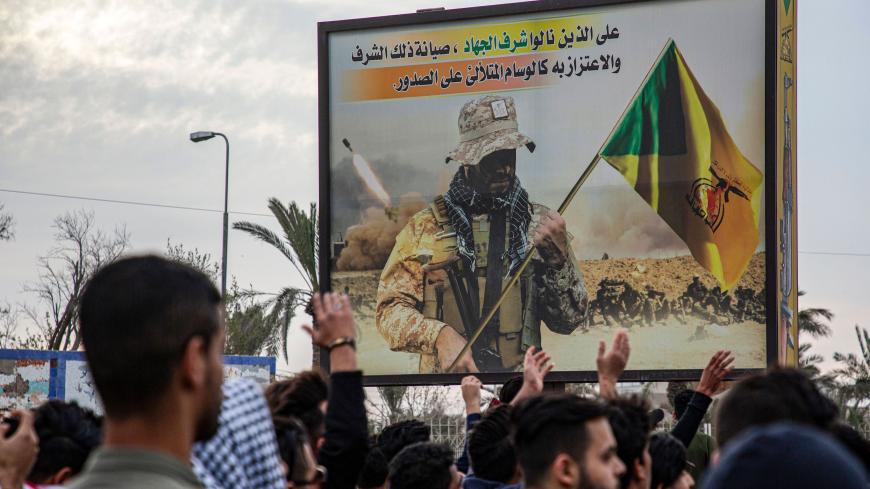 Protesters chant slogans as they walk past a pro-Kataib Hezbollah billboard during an anti-government demonstration, also calling for freedom of the press, in the southern Iraqi city of Basra on Jan. 17, 2020. - HUSSEIN FALEH/AFP via Getty Images

A year ago on July 1,  then Prime Minister Adel Abdul Mahdi issued a decree ordering the factions of the Popular Mobilization Units (PMU) to integrate fully into the state security forces.

A year later, they not only have not been integrated but are again resisting demands to assimilate with state security services, challenging the Iraqi government in multiple ways.

Previous efforts by Haider al-Abadi, who preceded Abdul Mahdi as prime minister, also failed. The PMU law Abadi introduced to parliament was approved, but he was unable to implement it.

Like his predecessors, current Prime Minister Mustafa al-Kadhimi has given priority to dealing with this crucial problem. But some of the PMUs are digging in against him.

Kataib Hezbollah, a pro-Iran militia within the PMU, celebrated the June 29 release of members who had been rounded up a few days before by trampling on photos of Kadhimi and burning them together with US and Israeli flags.

The scene was shocking for Iraqi public, as the militia is a part of the Iraqi security forces, which are under the command of the prime minister as the commander in chief of the armed forces.

This puts the lie to statements from the PMU that it is an official security force affiliated legally with the Iraqi state.

Moreover, Kataib Hezbollah Secretary-General Ahmad al-Hamidawi said following the release of his militia’s detainees, “The weapons of the Islamic resistance are a fundamental legitimate right, and will not be given away except to Imam Mahdi (the 12th Shiite imam). The weapons will not be restricted or be taken away.”

The head of Asa'ib Ahl al-Haq, Qais Khazali, had previously told Kadhimi that he never would be able to stop the resistance movement's attacks against US bases as none of the previous Iraqi governments were able to do so.

A number of Kataib Hezbollah members were arrested in the early morning of June 26 by the Iraqi Counter-Terrorism Service (CTS) under suspicion that they were preparing an attack against properties in Baghdad’s Green Zone.

But Kadhimi spokesman Ahmad Mulla Talal said in his weekly press conference June 30 that one of the detainees was still in the custody and that the relevant court is continuing the investigation of him.

“We have received very accurate intelligence information about an attempt to target sensitive sites and important foreign diplomatic missions. The CTS and other state security apparatuses dealt with the issue promptly. … The CTS had a court warrant to arrest one person who was the organizer of the [terrorist] operation. As he was accompanied by other people, the CTS arrested all but soon after all detainees except the organizer were released,” Talal said.

As the Kadhimi government tries to impose the state’s law on all security entities, including all PMU factions, a new parliamentary coalition has been formed to support and strengthen the prime minister's efforts.

The leader of the Hikma Movement, Ammar al-Hakim, said June 30 that he has formed a new parliamentary bloc called Iraqioon that "supports the strong and capable state, with national sovereignty and public will.”

This came a day after a meeting of the PMU’s Fatah bloc led by Hadi al-Amiri about the raid against Kataib Hezbollah. Amiri criticized the Kadhimi government's action, saying, “We say to those who cry for the restoration of state prestige, what prestige are you talking about while foreign forces are moving everywhere in the country, and the airspace is completely violated and the American and Israeli planes roam the skies of Baghdad and target the sons of Iraq, more importantly our two leaders Muhandis and Soleimani.” This was in reference to the US killing of PMU and Kataib Hezbollah leader Abu Mahdi al-Muhandis and Iranian Quds Force commander Qasem Soleimani in January at the Baghdad airport.

It seems that Hakim is trying to bring a number of political blocs, including Abadi’s Nasr coalition, and some independent parliamentarians under one umbrella to confront the Fatah bloc were it to make a move toward withdrawing confidence from Kadhimi government.

So far, 41 members of parliament have joined the Iraqioon Coalition. Fatah has 48 seats.

Meanwhile, Iran seems very quiet about Kadhimi’s actions against pro-Iran militias, as no Iranian officials reacted to the raid against Kataib Hezbollah.

Iranian Foreign Ministry spokesman Abbas Mousavi said in response to a question about the Iraqi government raid, “This is an internal Iraqi matter and Iran will not interfere in the internal affairs of Iraq.” He also said, “Iran is confident that the government and people of Iraq will deal with their internal affairs in a way that brings order and stability to the country.”

It seems that Iran is not willing to add more tension to the region at a time the country is facing tough sanctions and the ongoing COVID-19 pandemic. Perhaps even more important is that the United States is running a campaign in the Security Council to extend the arms embargo on Iran that is scheduled to end in October.

“Iran is already violating the arms embargo, even before its expiration date,” US Secretary of State Mike Pompeo said in a Security Council meeting June 30, adding, “Imagine if Iranian activity were sanctioned, authorized by this group, if the restrictions are lifted.”