Head of Asaib Ahl al-Haq Qais al-Khazali warns the Iraqi prime minister to steer clear of a clampdown or "lose everything.” 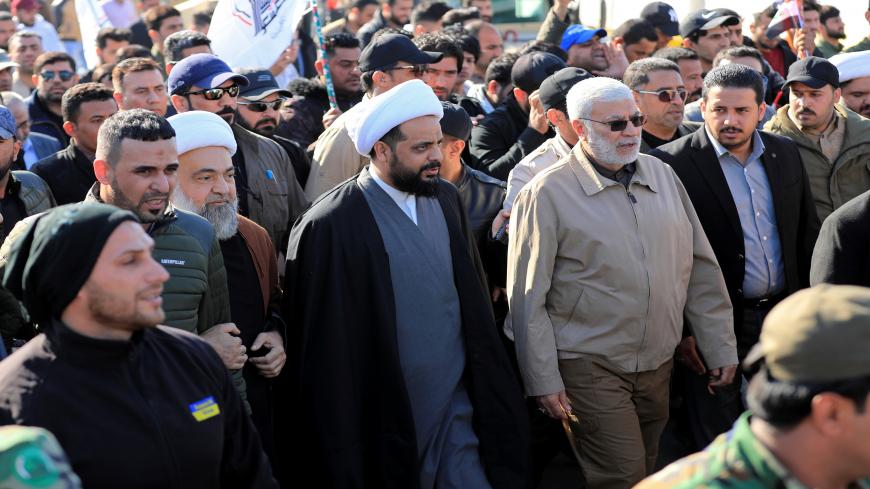 Qais al-Khazali, leader of Asaib Ahl al-Haq, and Abu Mahdi al-Muhandis, a commander in the Popular Mobilization Units, attend a funeral procession of PMU members who were killed by US airstrikes in Qaim district, in the Green zone in Baghdad, Iraq, Dec. 31, 2019. - REUTERS/Thaier al-Sudani

Following the raid by the Counter Terrorism Service (CTS) against the Kataib Hezbollah headquarter in Baghdad in the early hours of June 26, pro-Iran militias and their political allies are threatening the government of Prime Minister Mustafa al-Kadhimi, warning him to not continue taking actions against militias targeting US bases.

“Your government is a temporary government with two specific goals: early election … and addressing the economic and health challenges,” Khazali said, warning him, “Don’t create any other issues and don’t get involved in other issues that might happen. … Otherwise, you might lose everything.”

He added, “You want to resolve the attacks by the resistance factions against the US forces, but you could never do that. None of the previous governments could do that and none of them took such an action. Instead, they were all ignoring this issue because they knew they couldn't touch it."

This is the first time that one of the pro-Iran militias admitted that they are targeting the US bases in Iraq.

Previously, Asaib Ahl al-Haq had denied that any of the PMU are involved in attacks against the US Embassy in Baghdad, the fortified Green Zone or any other diplomatic mission in Iraq.

It seems that the raid against Kataib Hezbollah has triggered the confrontation between Kadhimi’s government and the militias.

The raid came after the CTS received intelligence information about possible attacks against the Green Zone soon, according to a Joint Operations Command statement issued immediately following the raid.

“The CTS was tasked to arrest [the militiamen] and prevent terrorist acts against state facilities. CTS carried out the task with a high professionalism arresting 14 defendants, with the criminal evidence of two launching bases. Upon completion of the operation, a special investigations committee was formed by the Ministry of Interior that includes security services members. The defendants are kept in custody until the relevant court will address their case,” the statement read.

Khazali slammed the Joint Operations Command as well, accusing it that its statement has been “written by American hands.”

Abu Ali al-Askary, whose real name is not known but he is introduced by Kataib Hezbollah as its security leader, also attacked Kadhimi for his action against KH militia, claiming that the detainees have been released and Kataib Hezbollah has lodged a legal complaint against Kadhimi for his illegal action. However, the Kadhimi government denies the release of the detainees, saying that they are under investigation and they will appear in court soon.

In the same vein, the militia media spread rumors that US Ambassador to Kuwait Alina Romanowski had confirmed that the US-led coalition had joint the CTS in the raid against Kataib Hezbollah, noting that it was done following the request of the Iraqi government.

The US Embassy in Baghdad immediately denied the news, saying, “The remarks attributed to U.S. Ambassador to Kuwait Alina Romanowski in the Iraqi media are a malicious fabrication. Ambassador Romanowski gave no such interview and the purported 'news' originates from a website created to spread fake information."

The militias also organized multiple maneuvers in the streets of Baghdad and entered the Green Zone to show its force.

However, Kadhimi issued several orders restructuring the security numbers and officials, including the head of the Green Zone security, due to their failure in stopping the militiamen's illegal maneuvers.

In order to increase the pressure on Kadhimi, the PMU’s Fatah Alliance has requested to question the prime minister in the parliament for his failure to address the coronavirus pandemic in the country.

In the same vein, the head of the Fatah Alliance, Hadi al-Amiri, said June 28 that his support for Kadhimi was conditional, implying that it can be withdrawn at any time.

Kadhimi has backing for his policies across Iraq's political spectrum. While the pro-Iran militias are preparing for the battle with the prime minister, it seems the other political forces and security organizations are entirely supportive of Kadhimi's course of action. The Kurds and the Sunnis have a clear interest in reining in the militias' ambitions, and the Shiite forces — including the PMU factions outside of the Iran circle and independent Shiite parties like Ammar al-Hakim’s Hikma bloc and former Prime Minister Haidar al-Abadi’s Nasr coalition — also want the militias to be fully under control of the state in order to bring the stability back to Iraq.

This is all taking place despite Shiite top cleric Ayatollah Ali al- Sistani urging the Iraqi government several times in the past to bring all armed groups under full control of the state. "We urge that all weapons should be subject to the authority of the state and not allow any armed groups outside of the state scope under any name or address," Sistani's spokesman Sayyed Ahmad Safi said in December 2019.

The issue of the PMU remains a thorny one for the government. Kadhimi may soon visit Washington as part of Iraq’s strategic dialogue with the United States, which has given high priority to reining in those groups linked to Iran. In addition, addressing the economic crisis by inviting foreign investors to the country depends on the government's ability to protect foreign diplomatic missions and companies and stop the militias' attack on them, which is happening every now and then.