Top Shiite cleric Grand Ayatollah Ali al-Sistani backs early elections and calls on the Iraqi government to take action against the outlawed militias and mafia active in the country. 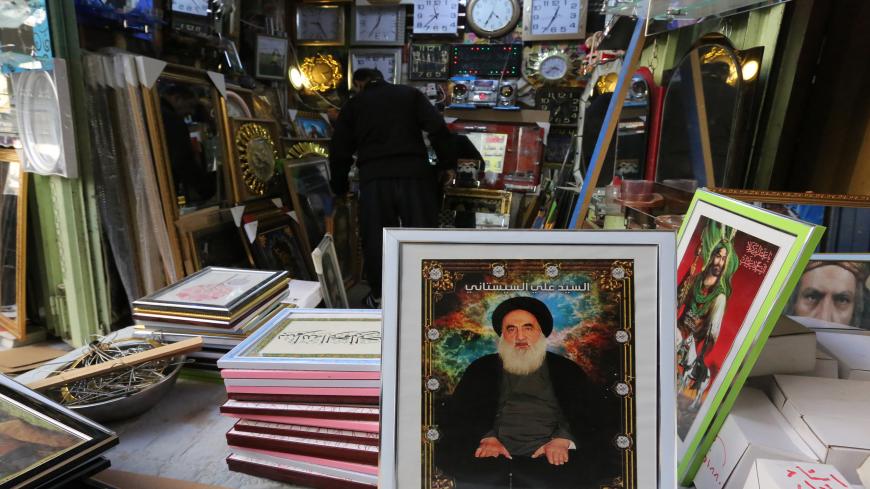 A picture of Iraq's top Shiite cleric Grand Ayatollah Ali al-Sistani is seen at a shop in a market in the capital Baghdad, Iraq, Jan. 18, 2020. - SABAH ARAR/AFP via Getty Images

During a meeting Sept. 13 with the special representative of the UN secretary-general for Iraq, Jeanine Hennis-Plasschaert, top Shiite cleric Grand Ayatollah Ali al-Sistani called on the Iraqi government to go ahead with Prime Minister Mustafa Al-Kadhimi's plans for early elections and to impose rule of law, confiscate illegal arms, stop certain groups from dividing Iraq into spheres of influence forcibly under different excuses, fight corruption unselectively and seek justice for all who were killed, injured or abducted during the ongoing reform protests in Iraq.

“The parliamentary elections scheduled for next year … must be provided with the necessary conditions that result in a high degree of credibility, so that the citizens are encouraged to participate in the elections widely,” Sistani said.

Prime Minister Mustafa al-Kadhimi had announced last month that he is planning to organize early elections in June 2021.

However, early elections require three essential steps. The first step is the finalization of the elections law that is still disputed among the political parties. The second step is the amendment of the Elections Commission that was formed recently but has not been accepted by the protesters due to the political parties' role in selecting its members. Serving judges make up the current commission, but the protesters are asking to replace them with retired judges to prevent any kind of influence from the judiciary system or political parties that some judges are affiliated with. The final step is the formation of the Federal Court that is in charge of overseeing the elections.

Furthermore, the Political Parties Law should be amended in a way that prevents the militias from participating in the elections and the political parties from receiving foreign support and corrupt money, forcing them to show full transparency.

"[Early elections] must be conducted in accordance with a fair and equitable law, far from the personal interests of some political parties,” Sistani said. “Integrity and transparency must be taken into account in all of its [the elections] stages and strict supervision and control over the elections should take place with coordination of the relevant department of the United Nations mission.”

He also issued a warning against the high level of fraud and corruption of past elections, calling for a solution rather than increasing the problems.

The 2018 elections that brought former Prime Minister Adel Abdul Mahdi into office is the source of Iraq’s current dilemma, due to a high degree of fraud and wide participation of the militias in the elections that led to their domination over the state, allowing them to build and expand their deep state, which is the main cause of the protests and the current political crisis.

“Further delay in early elections or holding it without the necessary conditions … will lead to deepening the country's crises and will threaten its unity,” Sistani noted.

He also highlighted the need to fight corruption and outlawed military groups, calling upon the government to continue its efforts in this regard.

“The current government is required to continue and proceed firmly to implement social justice, control border crossings, improve the performance of security forces to reach a high degree of discipline and professionalism, impose the prestige of the state and withdraw unauthorized weapons,” Sistani added.

In July, Kadhimi had launched a campaign to impose state control on the border crossings and fighting militias and political parties that are benefiting from corruption in these outlets. He also launched a new campaign this month to withdraw illegal weapons in the southern provinces.

“[The government should] not allow certain groups to divide the country into enclaves controlled by force of arms under different excuses — far from the rule of law,” Sistani said.

This is the first time that Sistani has spoken about the Kadhimi government, and these are the most powerful remarks he has made about any Iraqi government since 2003.

In 2015, he had called upon the government led by Haidar al-Abadi to “strike them [corrupt politicians] with an iron fist.”

Abadi, however, was not able to fulfill Sistani's demand due to the war against the Islamic State (IS) and his weak position in the Iraqi political scene.

With Sistani's remarks, Kadhimi has the backing of the highest religious authority, as well as a substantial sector of the protest movement and the international community. Not to mention that the president and the head of the Judiciary System in addition to all political parties expressed support to Sistani's advice.

But Kadhimi only has a short window to accomplish this. Kadhimi must take action against both the corrupt mafia and outlawed militias before the political scene undergoes a change, especially given that the elections in Iran and the United States would affect the political situation in Iraq.

Since Sistani's speech yesterday, the militias have been silent, presumably taken aback by his remarks. Late last week, the four pro-Sistani factions of the Popular Mobilization Units (PMU) had met with the counterterrorism apparatus as part of ongoing negotiations to leave the PMU and joining the state security forces.

Sistani had also called on the government to conduct a serious investigation on groups that have killed, injured or abducted protesters in recent months.

He said the government should fight corruption and seek justice “unselectively.” This is a strong message to the government — to avoid any kind of politicizing judicial process that was common during the post-2003 era. As an example of the politicization of the judicial process, it is interesting to see that shocking cases like Mosul falling in the hands of IS and billions of dollars wasted in several corrupt projects have not been addressed at all, but all of a sudden former Electricity Minister Luay al-Khateeb — who is not supported by any political party, militia or other strong groups — has been prosecuted after only a year in office, despite the limited budget due to country's financial constraints.

Sistani did not talk about the US withdrawal of some 2,000 troops from Iraq, and he did not mention the wave of normalization with Israel, despite these issues having been the top priorities of the militias in the last few weeks.

This shows clearly that Sistani's priorities are completely different from those of the militias.

It seems that Sistani is assertive and persistent in advocating for Iraqi sovereignty in response to the actions of corrupt political parties and outlawed militias. Sistani, who turned 90 this year, may also be aware that like Kadhimi the window for reform in Iraq may be short.