Protests continue in Iraq for the fourth day in a row despite the prime minister's and other figures' efforts to calm the streets. 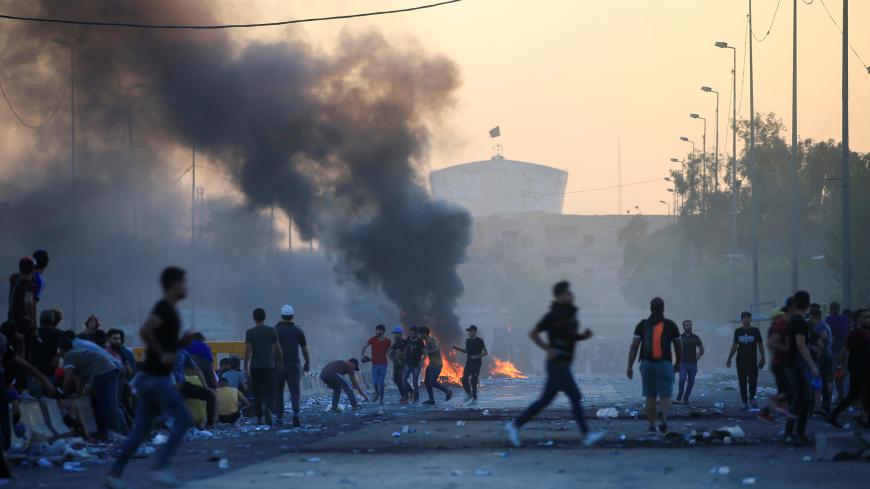 Demonstrators gather at a protest during a curfew, three days after the nationwide anti-government protests turned violent, in Baghdad, Iraq, Oct. 4, 2019. - REUTERS/Alaa al-Marjani

As the protests in Iraq continue for the fourth day in a row, Iraqi Prime Minister Adel Abdul Mahdi and Grand Ayatollah Ali al-Sistani spoke separately about possible solutions to the unrest. But their talks weren't enough to convince the protesters to go home.

In a televised address, Abdul Mahdi told protesters their voices have already been heard and their demands are legitimate. He promised the protesters to address their demands and asked the parliament to support him in amending his Cabinet.

But Abdul Mahdi emphasized there is no “magical solution” for the situation and “the government cannot solve all the problems in one year.” He said his government inherited the ongoing problems from the past and it cannot be blamed for the all issues.

Abdul Mahdi warned about the rising demands among some of the protesters to overthrow the whole political system and hand power to an impartial military figure — to former Iraqi Counter-Terrorism Forces Cmdr. Abdul Wahab al-Saadi in particular.

“Do not let those making calls of desperation get the best of you, and do not heed calls for a return to the militarization of the state and society again,” Abdul Mahdi said.

He also made several unclear general promises that are unlikely to meet the protesters' expectations.

His government has already begun on a number of developmental and economic projects, Abdel Mahdi said, adding, “We will present a project to the parliament very soon that will provide salaries to all [families under the poverty threshold] in Iraq.”

In his first comment on the protest, the senior cleric sharply criticized the political process in Iraq, accusing the government and parliament as well as political parties of failing to address the people's demands.

Sistani's representative condemned the use of violence against the protesters. He repeated Sistani's previous calls to form a special committee consisting of experts in different relative fields to contact the protesters, collect their demands, form a realistic plan and then hand the plan over to parliament and the government to work on implementing it. He also offered Sistani's support if such a committee happens to be formed.

Safi warned of the consequences of violence, saying even if the government succeeds in suppressing the protests, another, more violent government will rise up later.

Al-Monitor has learned from a source close to the Sistani office that Abdul Mahdi asked Sistani to address the protesters in the Friday speech and ask them to return home, calm the situation and give the government another chance to solve the issues. Sistani refused his request.

Soon after Sistani's statements, prominent Shiite cleric Muqtada al-Sadr ordered his parliamentary bloc, the Sairoon Alliance, to suspend their presence in parliament until the government provides a plan that meets the people's and Sistani's expectations.

The Sairoon Alliance has 54 seats in parliament— their absence would not halt the government.

The Sairoon Alliance and the Fatah Alliance were behind the election of Adel Abdul Mahdi and the formation of his government. Now they are both trying to escape responsibility and blame the current situation on Abdul Mahdi.

Sadr has led protests since 2015, but this time he has shown little support. He appeared last month in Iran, seating next to Iranian Supreme Leader Ali Khamenei. Since then, his discourse against Iran has abated significantly. In a surprise shift of stance from his tactics over previous years, he has not called his followers to support the protests and provide protection for them.

However, late Friday Sadr issued a call for the government to resign and for a snap election to be held under UN supervision, a demand also supported by former Prime Minister Haider al-Abadi.

In another move to calm the streets, the Iraqi Foreign Ministry on Oct. 2 summoned Iran's ambassador in Baghdad, Iraj Masjedi, informing him of Iraq's discontent with his statements last week that Iran will target US personnel in Iraq if the United States attacks Iran. The ministry also spoke to Masjedi about the September arrest and humiliation of the Iraqi diplomat delegation in Mashhad, which led to the closure of the Iraqi consulate in the city.

The two aforementioned incidents appear to be among the reasons for the ongoing protests.

In its first comment on the protests, Iran's Foreign Ministry on Oct. 3 criticized the protests, saying “Iran is confident that the government, together with the political parties and religious authorities, will work on calming the situation and not allowing some movements to harm Iraq.”

The Iranian media widely blame the United States and Saudi Arabia for the current protests, accusing organizers of the protests of being affiliated with the US and Saudi agendas in the region.

Despite Abdul Mahdi's promises, the curfew he imposed yesterday in Baghdad and other Iraqi cities, and Sistani's speech, the protests continue unabated.

Security forces on Oct. 4 opened fire on the protesters, which further raised the death toll and number of injuries.

With these circumstances, Abdul Mahdi seems to be facing a dead end as he cannot stop the protests forcibly and cannot fulfill the protesters' demands, which would lead the protesters off the streets.