Clock ticks down for Iraqi PM as protests rock the country

The blocs that put Iraqi Prime Minister Adel Abdul Mahdi in office seem to be sacrificing him to save their political interests. 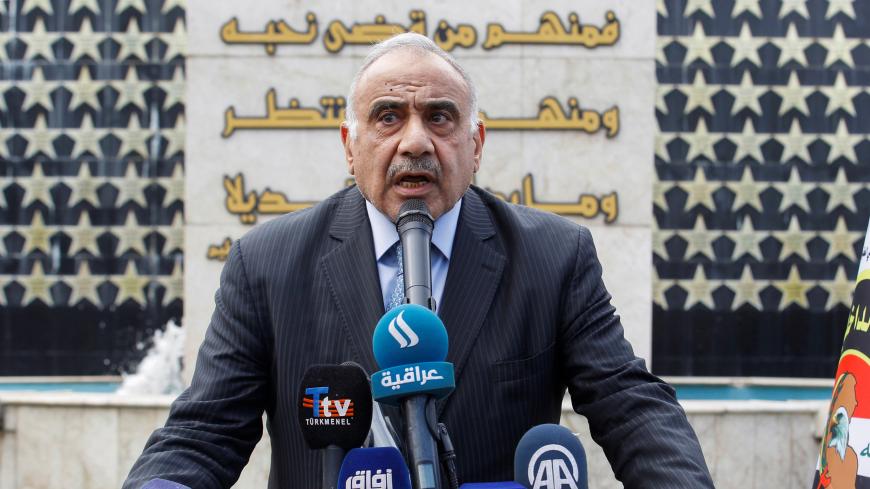 Muqtada al-Sadr and Hadi al-Amiri, the two main supporters of Iraqi Prime Minister Adel Abdul Mahdi, agreed Oct. 29 to work on removing him from the office and forming a new government as protests expand across central and southern Iraq.

Sadr is the head of largest parliamentary bloc, Sairoon, and Amiri heads the second largest, Fatah. The alliance between the two blocs brought Abdul Mahdi to the office last year. Now both are distancing themselves from him to protect their political interests and status.

Sadr, who was in Iran since last September, arrived in Iraq on Oct. 29 and in a surprise appearance, joined the protesters in the holy Shiite city of Najaf in a show of support. But the protesters rejected him, shouting, “Muqtada remove your hand, these people don't want you.”

Sadr had sent a message the same day to Abdul Mahdi, asking him to resign. The prime minister replied in an open letter, “You asked me to go to the parliament and announce an early election under the supervision of the United Nations and new electoral commission.” He reminded Sadr that such a plan is not the accepted legal procedure.

According to the Iraqi Constitution, the parliament is the only power that can vote on withdrawing confidence from the prime minister and his cabinet on request of the president or one-fifth of its members. If confidence is withdrawn by an absolute majority, the parliament's largest bloc will nominate a candidate to replace him and form a new government. Calling an early election is also not possible unless the parliament dissolves itself by an absolute majority vote, after which the government will have only 60 days to organize a new election.

Abdul Mahdi asked Sadr to work with Amiri on forming a new government instead of calling for early election.

Abdul Mahdi's letter to Sadr is an attempt to establish shared responsibility with them and convey the message to the public that he is not the only responsible party for the failures his government is blamed for. As the two main blocs forming his government, Sadr and Amiri's parties are responsible for those failures as well.

Sadr slammed Abdul Mahdi in a strongly-worded statement, saying, “By asking you to prepare for early election, I wanted to preserve your dignity. Now, if you continue to refuse, I will work with brother Hadi Amiri to withdraw confidence from you in the parliament and then work on changing the electoral law and electoral commission and other fundamental changes, including amending the constitution.”

“If parliament refuses, the people will have their say,” Sadr added, finishing with “Get out.”

Sadr seems to be afraid of losing his influence. He has been able to manipulate protests in the past, but this time, the protesters are angry at all political parties and figures including Sadr himself, accusing them of being part of the political and economic corruption in Iraq since 2003. Sadr has also been criticized for his recent appearance next to Iranian Supreme Leader Ali Khamenei.

Hadi Amiri replied to Sadr's invitation to work on dismissing Abdul Mahdi, saying that he will work with Sadr on whatever is in the interest of Iraqi people.

Meanwhile, Khamenei accused Iran's enemies including Saudi Arabia of spreading riots in Iraq and Lebanon, calling upon the Iraqi and Lebanese people to put the security of their countries first.

“I call upon all who loves Iraq and Lebanon to address the riot and lack of security that is caused by the United States, Israel and some other Western countries, with the funding of some backward countries,” Khamenei said, referencing Saudi Arabia with the latter.

Abdul Mahdi seems to have become an easy sacrifice to save the political interests of Sadr and Amiri's blocs.

In trying to distance himself as much as possible from Abdul Mahdi, his government and the entire Iraqi political system, Sadr is adopting a revolutionary discourse against the rest of the political establishment, in order to pave the ground for gaining more political power in the future, Amiri is trying to preserve his party's interests and will not pursue formal reforms.

Amiri's bloc includes the Iran-backed Popular Mobilization Units. Amiri and Iran both clearly know that a new election under pressure from the protests, which carry strong anti-Iranian messages, they will lose their influence in the Iraqi government and most likely, the PMU will be dissolved or integrated into the Iraqi army, which goes against Iran's agenda in Iraq.

In such circumstances, it seems that Abdul Mahdi's resignation or dismissal is only a matter of time. But after his departure, a difficult road will remain, with strong conflicts between pro-Iran forces and politicians in Iraq and the protesters. Iran will not let Iraq go easily.