Iran not letting Iraq go without a fight

Iraqi protesters have had enough of Iran’s heavy hand, but don’t expect the Iranians to pack up and go home. 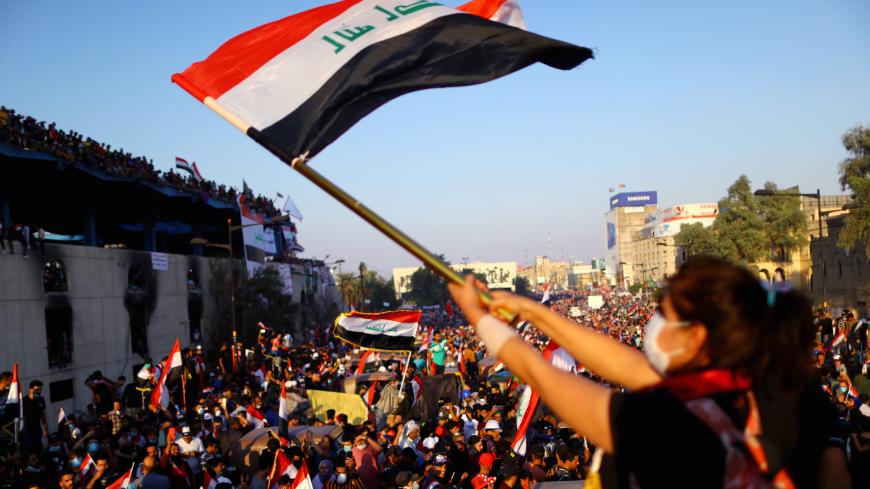 Iraqi protesters are not letting up in their calls for the removal of Iraq’s government, with the largest demonstrations so far on Friday. More than 250 have been killed in the last month, with thousands wounded. The mostly youthful demonstrators want Iran out of Iraq — a sign of a hopeful "post-sectarian" turn in Iraqi politics. But don’t expect Iran, with its many levers of influence and disruption, to concede defeat and withdraw.

The understandable impatience of the Iraqi street

Iraq President Barham Salih, in an interview with Al-Monitor just days before the first round of demonstrations in Iraq, cited the need to provide jobs for young people as the “real mission" of regional leaders, adding that corruption is the “political economy of conflict.”

Soon afterward, Iraq’s young peple took to the streets, with only a brief break for the religious Arbaeen holiday.

Salih this week called for major reforms and a new election law to break the stranglehold of Iraq’s long-standing elites and factions on Iraqi politics, as Omar Sattar explains. Once the law is passed, Salih would call new elections.

Iraq Prime Minister Adel Abdul Mahdi has offered to resign if a replacement can be found, but it is electoral reform that gets to the core of the long-term challenge of political reform. It is not the only answer, of course — the system is a dysfunctional mess, and factions and outside powers will seek to influence and pressure, and the need for jobs can’t be solved overnight either. But allowing the people to cast a vote for something other than the precooked "lists" based on the existing parties and individuals is urgent.

The demonstrators, however, are not just calling for reforms — they want a clean sweep of the present government. Their understandable frustration may overshadow a central truth — that building takes a lot longer than breaking, and that undoing the present paralysis, for good, requires partnership with likeminded leaders.

The Iraqi Constitution, even with its flaws, is, well, the constitution. And chaos can end up forestalling the very reforms that provide the long-term answers to the present crisis. And those opposing reforms are many.

“There are political factions that like the current dysfunction,” writes Douglas Ollivant. “Unified by the Iranians, the (Shiite) Fatah party of Hadi al-Ameri, the (Sunni) Axis party of Khamis Khanjar and the (Kurdish) Kurdistan Democratic Party of the Barzanis are all unified by the negative goal of keeping Baghdad weak so that their own sub-national projects become more viable. So should courageous political actors emerge, they will almost certainly be overwhelmed by more malign actors harnessing public fear of real reforms.”

In one of the key political turns, Iraqi populist Muqtada al-Sadr, who commands the largest bloc in the Iraqi Council of Representatives (parliament), working with Amiri, has now turned against Abdel Mahdi to try to find a foothold in Iraq’s political earthquake.

“Sadr seems to be afraid of losing his influence,” Mamouri writes. “He has been able to manipulate protests in the past, but this time, the protesters are angry at all political parties and figures including Sadr himself, accusing them of being part of the political and economic corruption in Iraq since 2003. Sadr has also been criticized for his recent appearance next to Iranian Supreme Leader Ali Khamenei.”

The Iraqi demonstrators have made it clear that they have had enough of Iran. But don’t think Iran will just pack up and go home.

Iran’s current tack is to keep Abdel Mahdi in power, and try to undermine Grand Ayatollah Ali Sistani’s support for the protests (which has so far failed). Khamenei has also ominously hauled out the “foreign enemy” card. “I call upon all who loves Iraq and Lebanon to address the riot and lack of security that is caused by the United States, Israel and some other Western countries, with the funding of some backward countries,” Khamenei said this week, referencing Saudi Arabia.

“Iranian influence has penetrated deep inside the Iraqi government, which is still confronting challenges in the institutions established under the US occupation, including the army and the Counter-Terrorism Service,” Mamouri writes. “The dismissal of popular Counter-Terrorism Service commander Abdel-Wahab al-Saadi was one of the factors that ignited the protests. It appears what are supposed to be independent Iraqi bodies are being targeted and weakened by and in favor of Iranian proxies behind the scenes.”

The battle against Iranian influence in Iraq is a long game, but the pace is picking up. On the one hand, both Washington and Tehran may share an interest in seeking to avoid the complete collapse of the government. However, if the protests continue to escalate, Iraq could easily become a battlefield — perhaps now more than ever.

No way Iran is cashing out on Iraq, which is national security priority No. 1. And not just strategically and militarily. Iran’s economic vitals are awful, and it needs the Iraqi economic lifeline. The latest International Monetary Fund report on the Middle East and Central Asia shows a decline in Iranian gross domestic product of 9.5% this year, followed by 4.8% in 2018; oil and gas exports falling from 2.15 million barrels per day in 2016 and 2017 to just 600,000 this year; and inflation in the range of 35.7%.

If Iran feels under threat, and the government tilts toward collapse, the regime in Tehran has many levers — influence in the electricity and other sectors, within the security services, with the Popular Mobilization Units and Amiri and other parties — it can keep pushing.

Unlike the United States, which has been invested in Iraqi institutions, Iran is only concerned with its power and influence. Tehran has a higher tolerance for chaos and bloodshed, as long as it's on Iraqi soil. Islamic Revolutionary Guards Corps Quds Force leader Qasem Soleimani has experience with Iraq as a battlefield.

And then there is the Islamic State, which is in transition after US forces took out Abu Bakr al-Baghdadi. Iraq already hosts 250,000 Syrian refugees and over 1 million Iraqis displaced by the previous war against IS. Iraq’s post-IS communities require $88 billion in reconstruction assistance, according to Iraq Finance Minister Fuad Hussein. The risk of an IS resurgence in Iraq is only increased given the current instability.

Patience and reform are the two things the street does not want to hear. But that is what is required.

The default setting of an Iraqi government collapse is probably not stability and democracy. The neighbors and the region will have their say on the course of events, and not always for the better.

There is always a risk with comparisons, but it is worth keeping in mind that Nelson Mandela needed South African President F.W. de Klerk to undertake the reforms that ended white rule in South Africa.

In a statement Nov. 1, US Secretary of State Mike Pompeo welcomed “any serious efforts made by the Government of Iraq to address the ongoing problems in Iraqi society” while calling for the relaxation of “recently imposed severe restrictions on freedom of the press and of expression,” adding that “press freedom is inherent to democratic reform.”

The political and economic program needed for Iraq will require the deep engagement of the UN and the International Monetary Fund and other impartial international bodies. Starting down these roads is what will crowd out Iran and others who have a stake in the current broken system. But if the demonstrators want to chuck the baby and the bathwater, a government collapse will be seen by Tehran and IS as an opportunity to make their move.