Is Iran expanding its influence in Iraq?

Iran seems to have further expanded its influence in the Iraqi government; Tehran still, however, faces challenges in Iraqi governmental bodies that have remained independent of Iran. 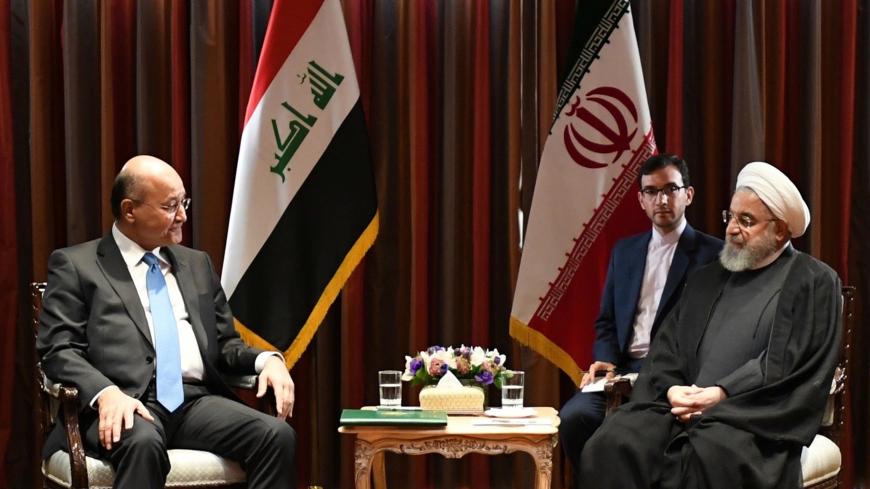 Well-known Iranian activist and journalist Roohollah Zam was captured Oct. 14 in Iraq and deported to Iran. The details surrounding his arrest and deportation have raised questions about the magnitude of Iran’s influence in Iraq.

BBC Persian, Saudi-funded Alarabiya and many other Persian and Arabic media outlets reported that Zam had been captured by the Iraqi National Intelligence Service on an arriving flight from France at the Baghdad airport and immediately handed to Iranian agents, who sent him to Tehran the same day. Both the Iranian and Iraqi governments have remained silent about the reports, neither confirming or denying them.

Despite having a good relationship with Iran, the Iraqi National Intelligence Service has been widely known for being independent from Tehran's influence in Iraq. Pro-Iranian social media have accused the Iraqi service of being behind the recent protests in Iraq, accusing its head of supporting the organizers of the anti-corruption protests that erupted in Baghdad and other Iraqi southern cities Oct. 1.

Following the recent protests, Faleh al-Fayadh, an Iraqi National Security Council adviser and head of the PMU, attacked the protesters in the media. “Some want worse things to happen to Iraq,” he said. “They have already achieved [this], and they committed a crime." It was unclear, however, what crime he was talking about.

Fayadh added, “We will seek revenge against them. We cannot tolerate people who conspire against this country.… PMU factions are ready to intervene to prevent any coup or insurgency in Iraq, should the government request.”

Anti-Iran slogans were prevalent at the latest protests.

In an interview with Alsharqiya TV on Oct. 20, Hamed al-Jazaeery, deputy secretary-general of the Khorasani Brigades, a pro-Iranian PMU militia, accused the protesters of being responsible for the violence against security forces by using weapons and explosions. He also accused the United States of involvement with snipers who have fired on protesters and security forces with the intent to “ignite strife.” However, the Khorasani Brigades militia itself was accused of involvement with snipers who targeted protesters from the top of public buildings in Baghdad in early October.

In contrast to Fayyadh, Iraqi President Barham Salih has expressed support for the protesters and criticized the forces that have targeted demonstrators and that have arrested journalists and activists. Salih described these forces — which he did not specifically identify — as “enemies of Iraq” and outlaws. He said the Iraqi government has not ordered its forces to shoot protesters.

Grand Ayatollah Ali Sistani, however, has said, “The government and its security apparatuses [are] responsible for the heavy bloodshed.”

Reuters has quoted anonymous Iraqi security officers supporting the position of Salih and Sistani that the snipers belong to a militia close to Iran, working under the PMU umbrella but acting separately from the Iraqi government. The PMU consists of a number of military factions, including pro-Iranian militias, that are supposed to be under the command of the prime minister.

“We have confirmed evidence that the snipers were elements of militias reporting directly to their commander instead of the chief commander of the armed forces,” Reuters reported an unidentified Iraqi security source as saying. “They belong to a group that is very close to the Iranians.”

An investigative committee formed by the prime minister to look into the violence that took place during the protests issued a report Oct. 22 that says, “Officers and commanders lost control over their forces during the protests (and this) caused chaos." The report references the snipers, but does not say anything about their identity or who they were working for. The report's authors recommended the dismissal and prosecution of dozens of Iraqi security forces. No PMU factions or their affiliated parties were accused of suppressing the protests.

Baghdad and southern cities saw another wave of protests Oct. 25, and many fear another eruption of violence. Jazaeery, however, said that there is no need for demonstrations as long as the government is working to fulfill protesters' demands.

All this suggests that Iranian influence has penetrated deep inside the Iraqi government, which is still confronting challenges in the institutions established under the US occupation, including the army and the Counter-Terrorism Service. The dismissal of popular Counter-Terrorism Service commander Abdel-Wahab al-Saadi was one of the factors that ignited the protests. It appears what are supposed to be independent Iraqi bodies are being targeted and weakened by and in favor of Iranian proxies behind the scenes.