The recent strategic dialogue talks between Iraq and the United States have divided anti-US groups in Iraq, as some welcome the results of the dialogue and others reject it and ask for full US withdrawal from Iraq. 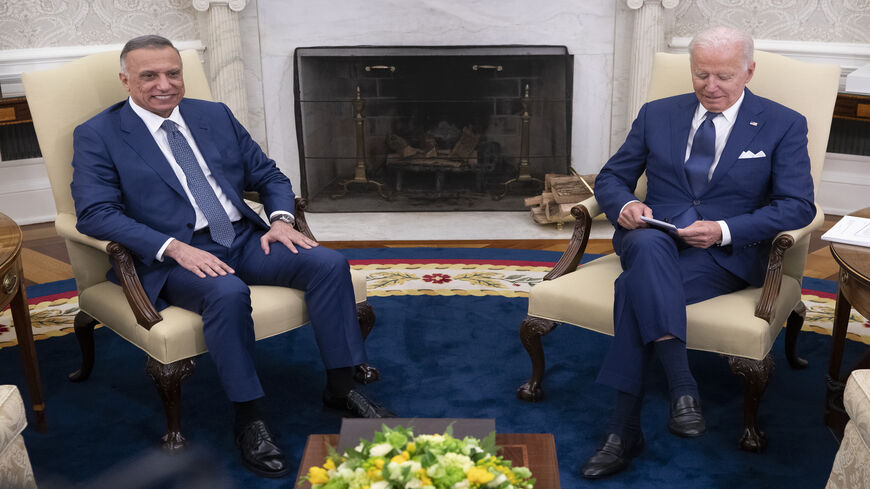 After a series of talks between Iraq and the United States, the two parties agreed during Iraqi Prime Minister Mustafa al-Kadhimi's visit to the United States to end the presence of US combat forces in Iraq by Dec. 31, 2021, at which time “the security relationship will fully transition to a training, advising, assisting, and intelligence-sharing role,” according to the July 26 joint statement on the US-Iraq Strategic Dialogue.

Upon his return to Baghdad from Washington, Kadhimi was welcomed by various political and security figures — including the head of Popular Mobilization Units (PMU) Falih Fayyadh — in a sign that the results of the strategic dialogue between Iraq and the United States have been widely accepted by different Iraqi groups.

During strategic dialogue meetings in late 2020, the United States decided to decrease its combat troops to 2,500. It is expected to initiate another withdrawal by the end of this year, leaving only the noncombat personnel to continue assisting in training and logistics support to the Iraqi security forces.

While the majority of Iraq's political parties welcomed the results of the strategic dialogue, the militias have not approved the outcome and some of them threatened to continue attacking US personnel in Iraq until all US forces — whether combat or noncombat personnel including trainers, advisers and others — leave the country.

Iraqi President Barham Salih, parliament spokesman Mohammed al-Halbusi, Ammar al-Hakim’s Hikma bloc and Haider al-Abadi’s Nasr coalition were among those that welcomed the results of the dialogue and considered it a victory for Iraq.

Muqtada al-Sadr — whose Jaish al-Mahdi militia was the first militia group attacked by US troops after 2003, with most other Shiite militias emerging from this group — also welcomed the result of the talks and said, “The military actions of the resistance must come to a complete stop,” calling them “so-called resistance actors and meddlesome.”

Even the political wing of the PMU in the parliament — the Fatah Alliance — had welcomed the results of the dialogue and considered it a “national success” for Iraq.

A day after the Fatah statement, the Resistance Coordination Committee gathered and rejected the result of the dialogue.

The committee was formed last year to coordinate between anti-US militias in Iraq, and includes Kataib Hezbollah, Asaib Ahl al-Haq, Harakat al-Nujaba and Kataib Sayyid al-Shuhada. Most of the attacks against the US bases in Iraq in the last year were orchestrated by these groups or newly formed groups affiliated with them.

“[The final statement of the Iraq-US talks] bears multiple faces and is not explicit,” a July 28 statement of the Resistance Coordination Committee read. “It carries a lot of ambiguity and fraud.”

The dialogue “does not go beyond a deceptive declaration to maintain the occupation, but only changing its title,” the statement stated.

The resistance rejects the existence of any kind of occupation, according to the statement, threatening, “The resistance will remain fully prepared until the real withdrawal, and it will take its own actions and stances … and any foreign aircraft in Iraqi airspace will be considered hostile. It will be dealt with in a way that makes them regret their stay [in Iraq] and their lies and deception."

Leaders of four militias within the coordination committee also separately rejected the results of the strategic dialogue and announced that the resistance will continue against the occupation.

The militias' rejection to the results of the strategic talks comes in conjunction with their expanding threats to the region in general, not only Iraq.

In an interview with the BBC July 28, Jafar al-Husseini, military spokesman of Kataib Hezbollah, said that the US bases al-Omar and al-Tanf in Syria have been targeted by them in the past.

On July 25, Jordan’s King Abdullah confirmed that his country had been targeted by Iran-made drones in the past.

Previously, some of the militias’ officials speaking with The Associated Press confirmed that a number of drone attacks on Saudi Arabia were launched from Iraq.

It seems that there is a sharp division among the military factions opposing the United States in Iraq. While some groups such as the Badr Organization led by Hadi al-Amiri, who leads the PMU-affiliated Fatah bloc as well, are satisfied with the results of the strategic dialogue and do not object to the noncombat presence of the United States in Iraq, some other groups do not agree with any US presence in the country.