Following a White House meeting today between US President Joe Biden and Iraqi Prime Minister Mustafa al-Kadhimi, the two side announced an agreement that the US combat mission in Iraq will end by Dec. 31, 2021. 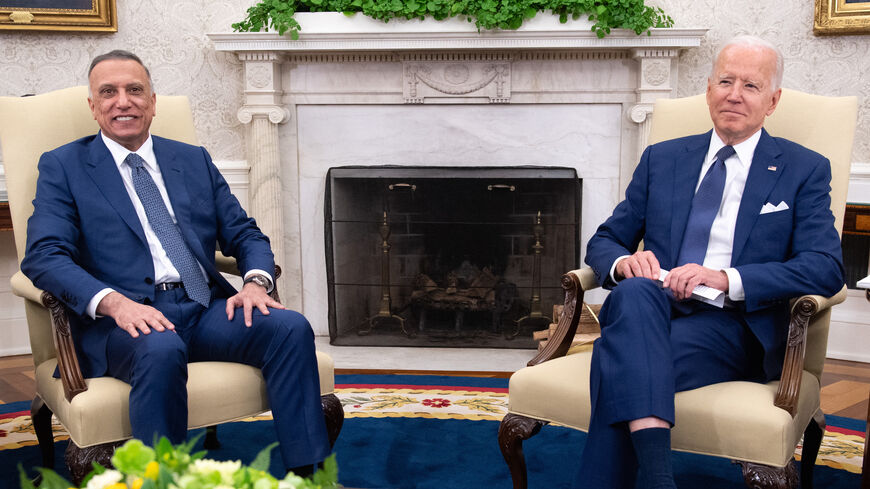 US President Joe Biden on Monday announced that the US military’s role in Iraq would no longer involve combat operations by the end of the year.

“Our role in Iraq will be … just to be available to continue to train, to assist, to help and to deal with ISIS [the Islamic State] as it arises, but we’re not going to be, by the end of the year, in a combat mission,” Biden told reporters alongside Iraq’s Prime Minister Mustafa al-Kadhimi at the White House today.

The two sides released a joint statement later on Monday reaffirming the position.

“The delegations decided, following recent technical talks, that the security relationship will fully transition to a training, advising, assisting, and intelligence-sharing role, and that there will be no US forces with a combat role in Iraq by Dec. 31, 2021,” the statement read.

“The United States intends to continue its support for the [Iraqi Security Forces], including the Peshmerga, to build their capacity to deal with future threats,” it read.

“The real news today is about a change of [the US-led] mission in Iraq,” White House Press Secretary Jen Psaki told reporters Monday. “It is more about moving to a more advising and training capacity,” she said.

But the planned announcement reflects more of a shift in terminology rather than an actual change of mission, experts say. The US-led coalition in Iraq wrapped up combat operations last year as it transitioned to an advisory role based in Baghdad alongside Iraqi commanders.

Kadhimi, who is seen in Washington as Iraq’s most capable leader in decades, faces early nationwide elections in October and significant pressure from pro-Iran factions to oust US forces from the country.

Kadhimi told The Washington Post earlier this month that he would ask Biden to withdraw combat troops from Iraq but to leave US military advisers and intelligence support. The majority of the roughly 2,500 US troops that remain in Iraq as part of the international coalition to defeat IS are advisers and brigade security team members.

Pro-Iran groups in Iraq have already begun to respond to news of the announcement. Members of Asaib Ahl al-Haq and its political wing, the Sadiqoun bloc, have criticized Iraqi leaders’ recent stance on the US role in the country.

BBC reported that Jaafer al-Husseini, spokesperson for Kataib Hezbollah, an influential Iran-backed militia in Iraq, has rejected any US-Iraqi agreement that leaves any American troops in the country, whatever their role.

The meeting at the White House on Monday marked the fourth and final round of strategic dialogue, with the first two rounds being held during the previous Donald Trump administration. The Iraqi delegation also included representatives of the Kurdistan Regional Government, according to the statement.

Asked on Monday about the future US troop presence in Iraq, Biden told reporters that his government remains focused on Iraq’s upcoming elections.

“We’re anxious to making sure the election goes forward in October,” he said.

A senior administration official hinted at a change in the US-led coalition’s footprint in Iraq in the coming months. “I think you can anticipate additional adjustments," the official said.

Neither Biden nor the senior administration official who spoke to reporters over the weekend would say how many US troops would remain in Iraq after the end of this year, though military officials have told Al-Monitor there have been no recent orders to alter the US footprint in Iraq.

Pentagon Press Secretary John Kirby last week could not say what percentage of the 2,500 troops there are “combat troops,” but acknowledged that their mission there “is largely advising and assistance.”

“I can’t break that down,” Kirby said in response to a question by Al-Monitor.

"Our troops [in Iraq] are capable of doing multiple things,” Defense Secretary Lloyd Austin told reporters traveling with him over the weekend.

“We task our combat troops, our troops that are capable of conducting combat operations, with training, advising, and assisting,” Austin said.

The US-led multinational mission in Iraq and Syria handed over eight bases to Iraq’s military last year as it consolidated at sites in Baghdad, Erbil and Anbar province. The overall mission, known as Operation Inherent Resolve, took on a new commander last week.

"US forces have not been directly involved in combat operations in Iraq for some time. They're there in an advisory role," said Mick Mulroy, the Pentagon's former top policy official for the Middle East and current ABC News analyst.

"It is important that as we draw down the combat capacity ... that we keep enough of our forces to maintain that advisory role, to adequately protect our forces from the attacks by Iranian-backed militias and to have the capability to surge combat support assets such as air and intelligence should IS make a resurgence," Mulroy, a former CIA paramilitary officer, told Al-Monitor.

The senior administration official said there were no changes anticipated to the US’ footprint in Syria, which falls under the same presidential authorities as part of the defeat-IS mission. The presence of some 900 US troops in Syria depends on the US troop presence in northern Iraq.

The official emphasized that discussions over the future US troop presence in Iraq was only one part of an “enormous agenda” between the two sides in Washington.

The Biden administration today unveiled $5.2 million in support to a UN mission to observe Iraq’s elections in October as well as $155 million in humanitarian assistance for displaced persons in the country.

The US also plans to deliver half a million Pfizer COVID-19 vaccines to Iraq to help combat the ongoing pandemic. “They’ll be there quickly,” Biden said today.

The Biden administration is also coordinating with Jordan’s government to finalize a project begun during the Trump administration that would connect Jordan’s electricity grid with Iraq’s.

“It'll help bring power to about a million Iraqis in southern Iraq and also some revenues to Jordan. So, it's a really major win-win initiative,” the official said.