Iraq announces end to US-led combat role with no fanfare

The defeat-IS coalition will continue its advisory mission into next year, despite a declared end to a combat role. 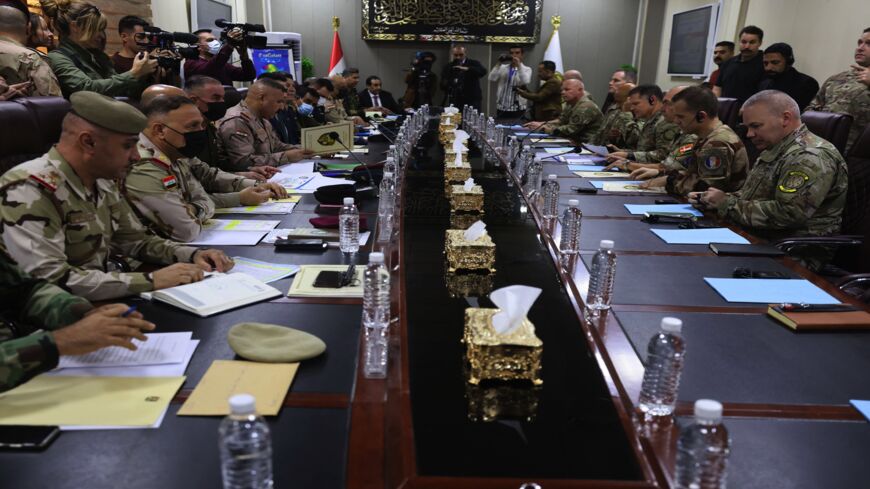 Commanding officers of the US-led international coalition against the Islamic State (R) and senior Iraqi commanders (L) meet at the Joint Operations Center in Baghdad's Green Zone, Dec. 9, 2021. The US-led coalition against the Islamic State group has finished its combat mission in Iraq and will shift to a training and advisory role, Iraq's national security adviser said Dec. 9. - AHMAD AL-RUBAYE/AFP via Getty Images

Qasim al-Araji announced the completion of the long-planned transition on Twitter on Thursday.

US troop levels in Iraq have not notably changed in recent months, press secretary John Kirby told reporters at the Pentagon. Some 2,500 US military personnel remain in the country as part of the multinational coalition to defeat the Islamic State (IS).

“There’s no significant posture change in Iraq right now,” Kirby said today. “This is a change in mission, not necessarily a change in posture.”

President Joe Biden and Iraq’s Prime Minister Mustafa al-Kadhimi announced following a July meeting in Washington that the United States would have no combat troops in Iraq by Dec. 31.

The messaging is ostensibly aimed at easing tensions with Iran-backed militias in Iraq, which have launched dozens of rocket attacks on coalition positions in recent years in a bid to oust foreign forces from the country.

The US-led coalition reduced its footprint in Iraq by roughly half amid the attacks last year and consolidated at major bases in Baghdad and Erbil to directly advise Iraqi commanders, part of a long-planned consolidation of the defeat-IS mission.

The rocket attacks have quieted down since the July announcement, but Pentagon officials are concerned that they may restart in January.

“The Iraqis still require capabilities and support from the United States,” including advice and intelligence on counter-IS operations," a senior US defense official said last month on the condition of anonymity.

“We’re committed to continue to provide that so long as the Iraqi government requests it from us. There’s been no change in their request for us to stay to provide those kinds of supporting roles.”

“There are certain spoilers and adversaries who are going to exploit this and attempt to make it something different than what it is,” the official said in reference to Iran-backed militias.

“US forces are still going to be there next year” in an advisory role, the official said. “This is an evolution in mission.”

American troops in Iraq will still be able to defend themselves, Kirby emphasized, declining to get into details when asked whether the coalition will continue to provide airstrikes for Iraq forces. "I think they're actually quite keen to stop all strikes and partnered activities from January 1 to make it mean something," said Michael Knights, a Jill and Jay Bernstein fellow at the Washington Institute for Near East Policy.

"It would, in theory, mean that US bombs are no longer dropping in Iraq," Knights told Al-Monitor.