CENTCOM fired a drone missile at at least one jihadi official near Idlib today in the first such strike in recent months. 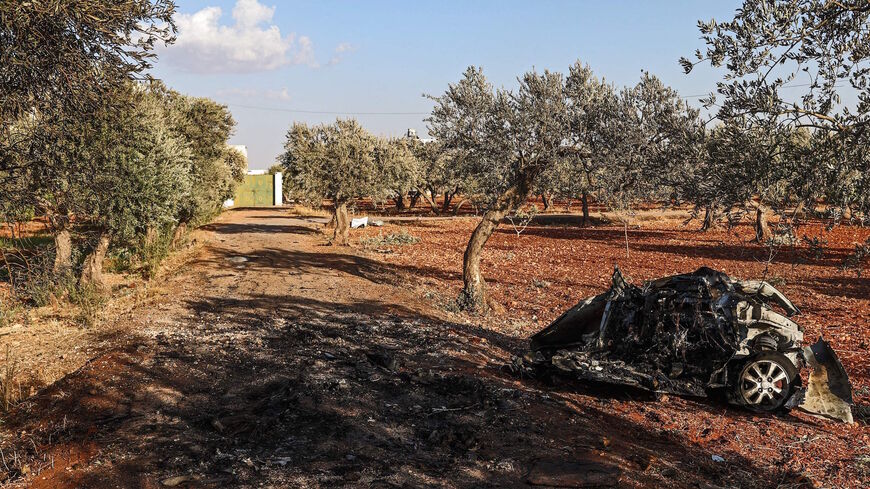 This picture taken on Sept. 20, 2021, shows a view of a vehicle destroyed by what is believed to be a drone strike, on the northeastern outskirts of Syria's rebel-held northwestern city of Idlib. - OMAR HAJ KADOUR/AFP via Getty Images

The United States military targeted an al-Qaeda official with a drone strike in northwest Syria on Monday, the Pentagon said.

Such US drone strikes have been relatively common in Syria’s Islamist opposition-held northwest in recent years, but Monday’s targeted killing followed a lull over recent months.

Agence France-Presse cited the head of the UK-based Syrian Observatory for Human Rights as saying the strike killed two jihadi officials, one of Tunisian and the other of either Yemeni or Saudi origin. US Central Command, which oversees operations in the region, did not return Al-Monitor’s request for comment by publication time.

Previous US strikes have targeted officials with the Syrian jihadi group Huras al-Din, a more extreme offshoot of Hayat Tahrir al-Sham (HTS). HTS grew out of the country’s local al-Qaeda branch, Jabhat al-Nusra, which emerged amid the peak of Syria’s frenetic civil war.

Apart from the Kurdish-led autonomous region in Syria’s northeast, Idlib province is the last remaining stronghold of opposition to Syrian President Bashar al-Assad. The province is dominated by HTS, which has increasingly sought to rebrand itself as a moderate opposition group.

The presence of other jihadi networks such as Huras al-Din in Syria’s northwest has raised concerns over the tenability of a cease-fire agreement reached last year between Russia, which backs Assad, and Turkey, whose military presence supports the opposition in Idlib.

Assad’s government has vowed to recapture the entirety of Syria by force but has so far proven unable to do so despite otherwise decisive Russian support.

The United States maintains some 900 troops in Syria’s northeast in support of a Kurdish-led alliance of militias known as the Syrian Democratic Forces (SDF). That mission, which has consisted of an international coalition backing the SDF to eradicate the Islamic State (IS), is considered separate from CENTCOM’s targeted strikes in Idlib province.

Earlier this month, the United States brought in a new commander to lead the twilight of the defeat-IS mission. Maj. Gen. John Brennan took command on Sept. 10.

Brennan, a veteran Special Forces commander who worked with SDF top commander Mazlum Abdi in the early days of the defeat-IS mission, also played a role in the Delta Force raid that killed IS leader Abu Bakr al-Baghdadi.

The assigning of a two-star general to lead the defeat-IS mission, which has normally been led by a three-star commander, came as Biden agreed with Iraq’s Prime Minister Mustafa al-Kadhimi to transfer the remaining US combat troops out of Iraq in the coming months — though it remains unclear for how long US military advisers may remain.

Biden administration officials have publicly insisted US troops are not leaving Syria and Washington continues to demand reforms by the Assad government in line with UN Security Council Resolution 2254.

The previous US administration sought to turn Syria into an unwinnable stalemate for Assad’s main backers, Russia and Iran, by tightening sanctions on the Damascus regime and backing the SDF as it controls Syria’s most lucrative oilfields, which were captured during the war against IS.