The rare drone strike in Idlib province was aimed to disrupt Huras al-Din's ability to stage terror attacks outside Syria, according to the Pentagon. 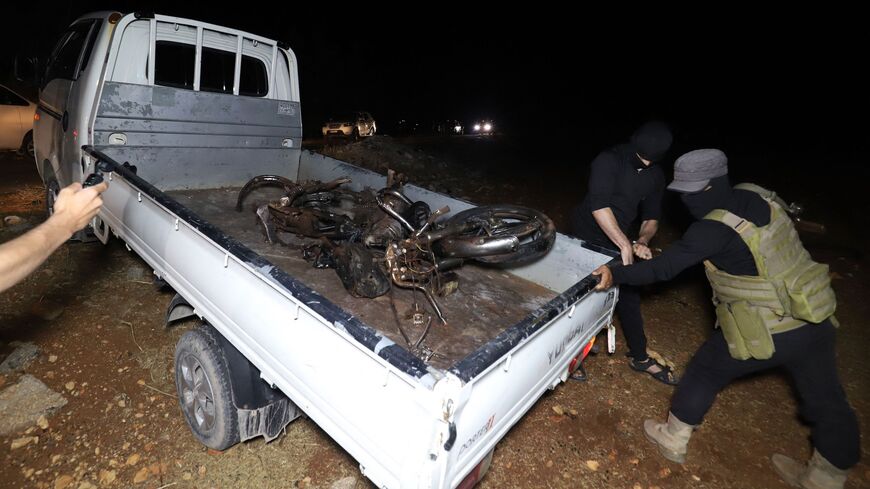 Fighters affiliated with the Hayat Tahrir al-Sham (HTS) jihadist group in Syria transport the remains of a motorcycle reportedly targeted in a drone attack on the eastern edge of Syria's rebel-held Idlib province, early on June 28, 2022. - ABDULAZIZ KETAZ/AFP via Getty Images

Abu Hamzah al-Yemeni, a senior leader with Huras al-Din, al-Qaeda’s local branch in Syria, was killed while traveling alone by motorcycle. There were no civilian casualties, according to the US military.

Why it matters: The strike is the first by the United States against an al-Qaeda affiliate in Syria in several months.

In early December, a man the United States identified as senior Huras al-Din official Musab Kinan was killed in a US drone strike while riding a motorbike in Idlib province. Members of his family were reportedly wounded in the strike, and the Pentagon acknowledged that civilians were injured.

Once relatively common, targeted US killings in Idlib have become less frequent over the past year.

Sunni jihadist networks in Syria have concentrated in the opposition-held northwest province of Idlib, seeking refuge from the US military and its Kurdish partners in the northeast and Russian and Iran-backed forces and the regime, which control much of the rest of the country.

“Al-Qaeda-aligned militants use Syria as a safe haven to coordinate with their external affiliates and plan operations outside of Syria,” US Central Command said in a statement following the strike. “The removal of this senior leader will disrupt al-Qaeda's ability to carry out attacks against US citizens, our partners, and innocent civilians around the world.”

Know more: Both al-Qaeda in Syria and its rival, the Islamic State group, are shells of their former selves.

The United States, Syrian Kurdish forces and Iraqi security forces continue to round up remaining IS officials after defeating the jihadist group in March 2019. US special operations raids have led to the deaths of two subsequent IS top leaders in less than two years.