The strike is believed to have killed a former member of Huras al-Din's Shura Council and a security official. 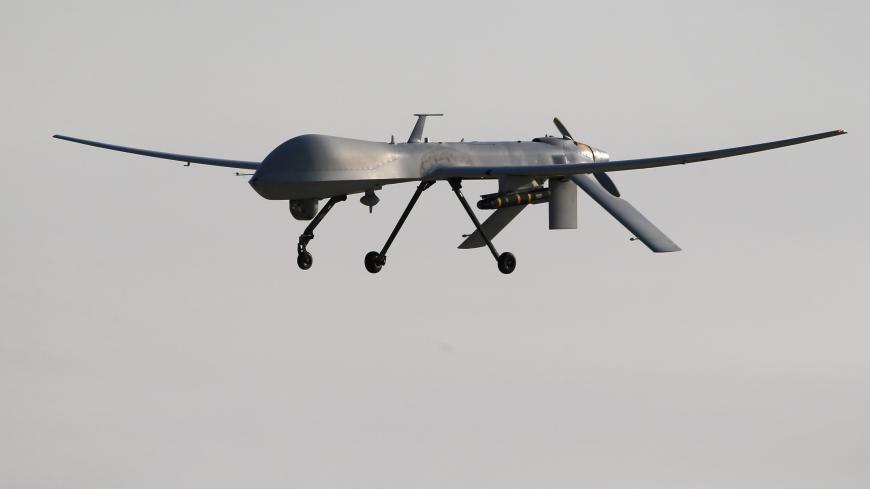 A US Air Force MQ-1B Predator unmanned aerial vehicle carrying a Hellfire missile lands at a secret air base after flying a mission in the Persian Gulf region on Jan. 7, 2016. The US military and coalition forces used the base, located in an undisclosed location, to launch airstrikes against the Islamic in Iraq and Syria. - John Moore/Getty Images

A US drone strike in the northwestern Syrian province of Idlib killed two al-Qaeda officials and reportedly injured other people near the village of Arab Sa’id on Thursday.

The US Central Command claimed credit for the strike in an email to Al-Monitor on Thursday. Al-Qaeda in Syria “continues to present a threat to America and our allies,” Maj. Beth Riordan wrote.

The UK-based Syrian Observatory for Human Rights said Masri had been a member of Huras al-Din’s Shura Council, and that al-Maghribi had been the group’s general security official.

SOHR also cited local sources as saying a child was killed in the attack, a claim that has not been independently confirmed by Al-Monitor.

Images purporting to show the result of the strike circulated on social media. In one photo, the remains of a mangled, burning vehicle can be seen on a dirt road.

Thursday’s strike was the latest in a string of US killings of suspected al-Qaeda officials in Syria’s opposition-held northwest, a region in which Turkish forces are present.

Turkey has agreed with Russia to remove extremist groups from the area as part of a cease-fire that halted the Syrian government’s Russia-backed offensive against the opposition-held province earlier this year.

Both Hayat Tahrir al-Sham and Huras al-Din both have roots in al-Qaeda’s branch in Syria, the defunct Jabhat al-Nusra.

The United States has repeatedly killed suspected al-Qaeda affiliates in Idlib using a non-explosive Hellfire missile dubbed the R9-X “Ninja,” named for the six blades that deploy from the missile as it strikes a target.

The weapon is designed to assassinate targets while minimizing harm to bystanders.