Intel: US drone strike kills at least 10 at al-Qaeda meeting in Idlib

Some of the dead were reportedly rivals of Hayat Tahrir al-Sham. 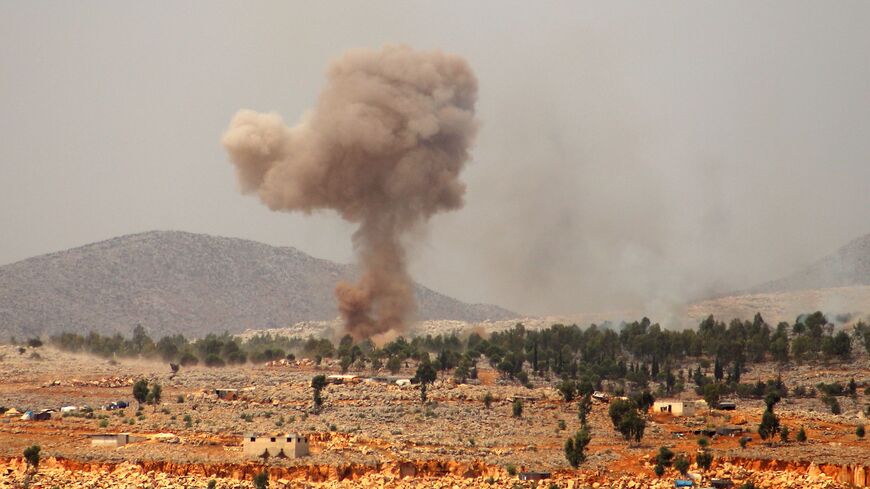 Smoke billows from a reported Russian airstrike near the village of Hafsarjah, in the western countryside of Idlib province in northwestern Syria, on Sept. 11, 2020. - ABDULAZIZ KETAZ/AFP via Getty Images

A US drone strike killed at least 10 attendees at a meeting in northwest Syria’s opposition-held Idlib province on Thursday, US Central Command said.

The strike hit “a group of al-Qaeda in [Syria] senior leaders meeting near Idlib” and that the group “continues to present a threat to America and our allies,” CENTCOM spokesperson Maj. Beth Riordan said in a statement.

“[Al-Qaeda in Syria] takes advantage of the instability in northwest Syria to establish and maintain safe havens to coordinate terrorist activities. With our allies and partners, we will continue to target al-Qaeda and other terrorist organizations,” it read.

Citing local sources, Washington-based analyst Charles Lister tweeted that 11 people were believed to have been killed in the strike, including a former Jabhat al-Nusra commander.

The UK-based Syrian Observatory for Human Rights said 14 people were killed, including five foreign jihadists and six commanders. Multiple sources reported the strike occurred in the village of Jakara.

Why it matters:  US drones regularly kill suspected al-Qaeda figures individually or in pairs in northwest Syria, but this strike was big.

Local reports say several of those killed were rivals of the local Hayat Tahrir al-Sham, the most prominent Islamist militant group in Idlib that is suspected to have ties to Turkey’s intelligence service.

Turkey’s military maintains thousands of troops in Idlib in support of the opposition. The strike is bound to add to rumors on the ground that HTS may be cooperating with Turkish intelligence, which in turn may be providing targeting information to the United States. So far, no evidence for the rumors have been made public.

Idlib province, the last opposition enclave in Syria’s civil war, has become a haven for Islamist militants after President Bashar al-Assad’s regime recaptured much of the country west of the Euphrates River and the US-led international coalition helped the Kurdish-led Syrian Democratic Forces to capture the country’s northeast from the Islamic State.

IS leader Abu Bakr al-Baghdadi was tracked down and died in a raid by the US Army’s Delta Force in Idlib province last October.

What’s next:  The United States says it will continue to target al-Qaeda affiliates in Syria.

Know more:  Fehim Tastekin examines why Turkey withdrew from the Morek outpost in northwest Syria this week, arguing that it may be a harbinger of bad news for the rebel-held province.