An al-Qaeda branch in northwest Syria has confirmed that a US drone strike earlier this month killed one of the group’s most senior leaders, a veteran Jordanian jihadi who had been close to Abu Musab al-Zarqawi. 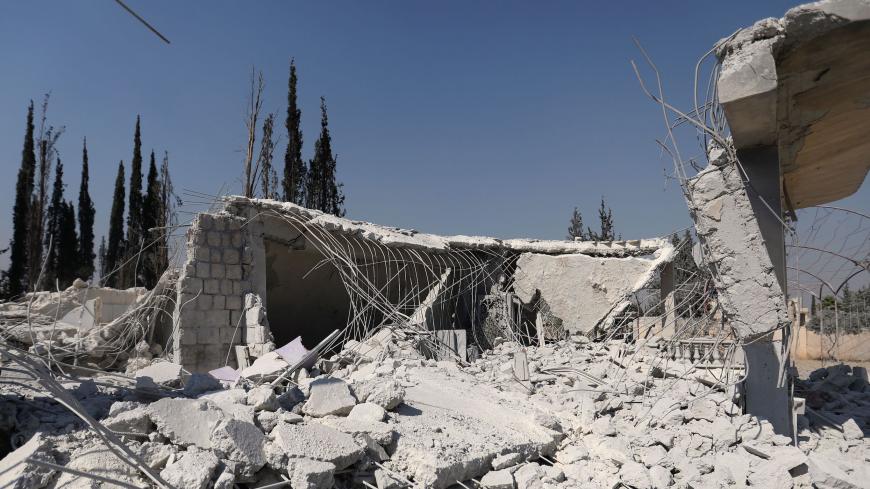 The ruins of buildings are seen on July 1, 2019, at a site where the US military carried out a strike against al-Qaeda-linked jihadis in Syria's northwestern Aleppo province. - OMAR HAJ KADOUR/AFP via Getty Images

An al-Qaeda branch in northwest Syria has confirmed that a US drone strike earlier this month killed one of the group’s most senior leaders, a veteran Jordanian jihadi who had been the brother-in-law of Abu Musab al-Zarqawi.

Huras al-Din, an al-Qaeda branch in northwest Syria, released a statement Wednesday saying that Khaled al-Aruri, also known as Abul Qassam al-Urduni, was killed as a result of a US strike on a vehicle he was in earlier this month in Idlib province.

Aruri was headed to a meeting of local militant leaders in order to form a military cooperation body, the statement read.

Video of the vehicle appeared to show it had been struck with a non-explosive missile bearing long metal blades, possibly the RX9 Hellfire missile, which the US military and CIA have used in prior strikes to limit collateral damage. The United States took credit for the strike last week.

Why it matters: The strike is one of Washington’s latest assassinations of senior jihadi leaders hiding out in an area of Syria controlled by Islamist rebels, some of whom are backed by Turkey.

Huras al-Din’s statement said Aruri was the group’s deputy emir for martyrdom, though others have suggested he may have been the group’s de facto leader. The veteran jihadi fought in Afghanistan both before and after the Sept. 11, 2001, attacks, and fought against the US occupation of Iraq “from its first days” alongside Zarqawi, the statement read. Zarqawi was killed in a 2006 US airstrike near Baquba, Iraq.

Last week, local reports said a senior Islamic State (IS) official who had been close to that group’s deceased leader, Abu Bakr al-Baghdadi, was also killed in a drone strike northwest of the Syrian city of al-Bab. A representative for US Central Command declined to comment on that strike. Baghdadi died during a US Delta Force raid on a house in northwest Syria in October.

US strikes on al-Qaeda and IS figures in northwest Syria are unlikely to let up. The State Department on Wednesday doubled its reward to $10 million for information leading to the killing or capture of Amir Muhammad Sa’id Abdal-Rahman al-Mawla, whom the US government believes is IS’ current leader, publicly known by the name Abu Ibrahim al-Hashimi al-Qurayshi.

Know more: Fehim Tastekin looks at Turkey’s perilous choices in Idlib province, including its commitment to Russia to get rid of hard-line groups.