PMU factions reluctant to target US interests in Iraq directly

Following the assassinations of Qasem Soleimani and Abu Mahdi al-Muhandis, Shiite armed factions are reluctant to engage in direct war with the United States due to the lack of military balance between them and their fear of US reactions. 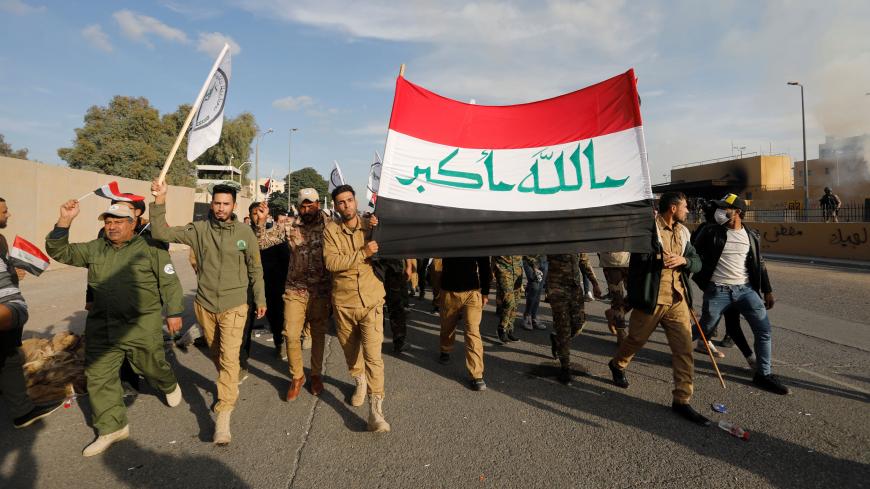 Protesters and militia fighters carry an Iraqi flag outside the US Embassy during a protest to condemn airstrikes on bases belonging to the Popular Mobilization Units, Baghdad, Jan. 1, 2020. - REUTERS/Khalid al-Mousily

Five missiles targeted the US Embassy in Baghdad Jan. 27, with one missile striking the inside of the reinforced embassy in the Iraqi government’s Green Zone.

It is not unusual for missiles to fall near the surroundings of the embassy. But this attack was different in that it targeted the inside of the embassy’s restaurant and hit five people whose nationalities and occupations remain unknown. Oddly, armed Shiite factions rushed to deny involvement in the operation.

Sources close to some factions of the Popular Mobilization Units (PMU) told Al-Monitor, “Shiite factions are working on avoiding a direct clash with Americans at the moment, and they are waiting for the political and governmental stance vis-a-vis expelling the US troops. However, it does not mean they did not target Americans in the past few weeks. They just decided not to announce it to avoid embarrassing the Iraqi government.”

The sources added, “The factions, especially those who are engaged in political work, do not want to risk their interests and gains. They wish to settle matters politically and not resort to military solutions.”

A PMU leader told Al-Monitor on condition of anonymity, “We expect a US military attack on the PMU factions soon.”

Armed Shiite factions that threaten US interests in Iraq never adopted or denied an attack, but this time they rushed to deny responsibility.

Both Fatah Alliance leader Hadi al-Amiri, who spearheaded an attack against the US Embassy on Dec. 31, and Asaib Ahl al-Haq leader Qais al-Khazali, who threatened to avenge Abu Mahdi al-Muhandis' assassination and who is listed as a terrorist by Washington, washed their hands clean of the operation.

Hezbollah Brigades — the elite of the Shiite factions — condemned the timing of the attack and was the only party to refrain from adopting or denying involvement in it.

Al-Monitor tried to meet some of its leaders to ask them questions, but they refused.

In a brief statement a day after the attack on the US Embassy, Hezbollah Brigades said, “The operation targeted the evil US Embassy. Although this is a normal reaction from the ardent Iraqi people, its timing is inconvenient and might humiliate the Iraqi government.”

Why didn’t Shiite factions adopt or deny previous attacks? Why did they instead focus on the public denial of this attack? Are the PMU factions afraid of the United States' reaction?

Watheq al-Hashemi, director of the Iraqi Group for Strategic Studies, told Al-Monitor about the reason armed factions and the PMU did not assume responsibility for the attack.

He said, “There are concerns about the US sanctions that are expected soon, and Iran is pressuring toward halting attacks on Americans due to the ongoing negotiations between the United States and Iran.”

The factions seem reluctant to target US interests in Iraq directly. Perhaps this is related to the “aggressiveness” of the US response to any such behavior. For instance, the attempt to raid the US Embassy in the last days of 2019 was met with a harsh response and cost Iran and the PMU their two most prominent military leaders.

Spokesperson for Asaib Ahl al-Haq Mahmoud al-Rabihi told Al-Monitor, “The resistance movements did not shell the US Embassy and decided to give a chance to political and diplomatic work and public pressure. However, this will not be the case forever and will be set by influential circumstances. The weapons of the resistance will always be ready, but this will be the last resort.”

Hisham al-Hashimi, a researcher at Al-Nahrain Center for Strategic Studies, talked about “a problem within the PMU ranks, which is the presence of two groups: the government’s PMU and the factions’ PMU.”

He told Al-Monitor, “The government’s PMU abide by the leadership decisions, unlike the factions’ PMU, which are hybrid forces. Some of those support the government and follow the law, administration and money, while others follow the resistance axis and Iran’s strategy and care for its interests in exporting the revolution.”

He added, “The second group did not have a commander to rein them in, and decisions were left to the jurisprudence of leaders of the factions to implement the agenda of the axis of resistance, after the assassination of Soleimani and Muhandis. Such chaos can only be contained by the [Islamic] Revolutionary Guards Corps.”

On Jan. 8, after the assassination of Muhandis and Soleimani, leader of the Sadrist current Muqtada al-Sadr, who spearheads a movement of armed factions, called on the factions not to be hasty in executing military attacks against US interests until “all political and legal methods are used up.”

The discourse of Sadr and the other factions known for their “rebellious spirit” changed after Soleimani's and Muhandis’ assassinations, and they modified the way they deal with the US presence in Iraq, which they initially refused. They are well aware there is no military balance between them, and they do not want to suffer any losses that would embarrass them in front of their rivals and the public. Therefore, they are trying to resolve the problem with the United States politically.

For the armed factions, the political and legal action to expel US troops is a way out of humiliation in front of their popular base, which is wondering about the delayed response to Muhandis’ killing despite inflated threats and Iran’s response to Soleimani’s assassination.

In a nutshell, the scattered stances of these movements indicate they will not engage directly with the United States and will adopt a strategy of intermittent attacks, like the one that targeted the US Embassy at the end of January. It looks like there is no real alignment of stances after the killing of Muhandis, who was their real leader and organizer.