Will US sanctions succeed in isolating Iraqi Shiite factions?

As the United States intensifies its activities against Iran in the region, it has also increased pressure on Iraqi factions backed by Iran. Yet the influence that these factions have in Iraq limits the effects of such pressures. 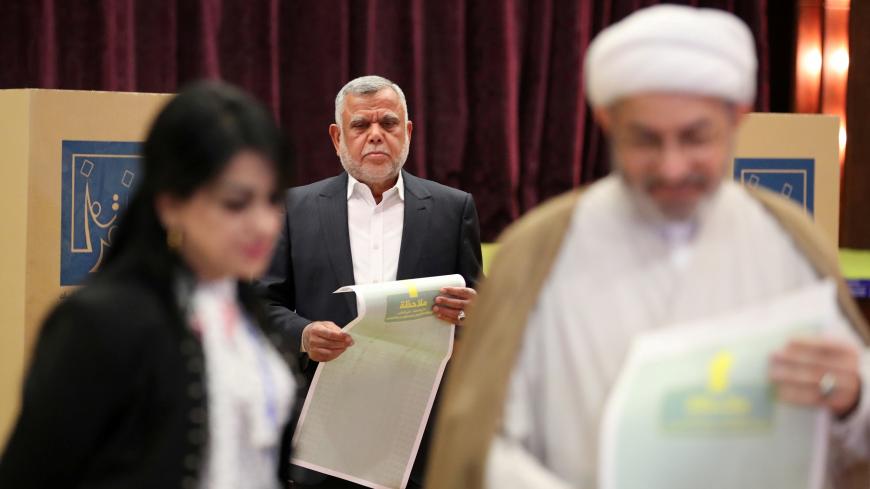 Hadi al-Amiri, the leader of the Fatah Alliance and Badr Organization, prepares to cast his vote at a polling station during the parliamentary election in Baghdad, Iraq, May 12, 2018. - Reuters/Ahmed Jadallah

Reports in the media about a US draft law imposing sanctions on Shiite factions that are close to Iran were met with disapproval and dismay.

On Sept. 12, Republicans from the US Senate expressed a plan to submit a draft law imposing sanctions on the armed factions affiliated with Iran due to terrorist activities. If passed, the law requires US Secretary of State Mike Pompeo to publish a list of Iraqi factions that receive support from Iran.

Member of parliament belonging to the Fatah Alliance Intisar al-Musawi commented Sept. 19 on the topic, saying, “Any US sanction against the factions of Islamic resistance is worthless and only falls within the lines of a Gulf-US plan seeking revenge over those supporting the resistance.”

The Fatah Alliance is a political alliance grouping the political sections of the armed factions close to Iran. On Sept. 13, Al-Nujaba movement, a pro-Iranian, armed Iraqi faction, qualified US pressure on Shiite factions as “political bankruptcy.”

Spokesman for Al-Nujaba movement Warith al-Hashimi told Al-Monitor, “We are no one’s agents, and we will not let the US rob us from our national image. We consider Iran to be an element of the resistance front.” The Resistance Front is the name that Middle Eastern countries opposing US politics in the region like Syria and Iran have adopted. Some armed factions consider themselves part of the front like Hezbollah in Lebanon and Shiite armed factions in Iraq.

The draft law aims to limit the growing Iranian influence in Iraq. Yet the expert on armed factions at the Al-Nahrain Center for Strategic Studies, Hisham al-Hashimi, does not believe the law will succeed in limiting the movement of those armed factions. He told Al-Monitor, “The Iran-backed Shiite armed factions have common ideological grounds with Iran. Being on the US terrorist list will not really affect them, as they don’t travel outside of Iraq to pro-US countries. Also, Iraqi law is not linked to US lists.”

This logic applies to figures like former member of the parliament and Popular Mobilization Units (PMU) representative Abu Mahdi al-Muhandis, whom the United States added to the list of designated international terrorists. Hisham al-Hashimi added, “Abu Mahdi al-Muhandis has been on the terrorist list, and, despite that, he was elected to parliament and occupied a major executive position as head of operations of the PMU.”

Yet one cannot ignore the limits that could restrict the movement of those subject to US sanctions for terrorism. Senior fellow at The Washington Institute for Near East Policy Michael Knights said, “I believe that these sanctions target Asaib Ahl al-Haq group at this stage due to its rising political and security role, especially after the last elections. This group won 15 seats and played an important role during the latest crisis and protests in Basra.”

Asaib Ahl al-Haq is an armed faction very close to Iran with an active political wing. Over this summer, news about the United States adding Asaib Ahl al-Haq to the list of international terrorists was leaked.

Knights affirms the danger of such laws, stating, “This would push these militias for more armed worked instead of pressuring them into moderation in the political process.”

Tensions between Iran-backed Iraqi factions and the United States have lately increased. Eleven Iraqi factions asked on Sept. 5 for US troops to leave the country or the troops would be treated as occupation forces and the factions would use all methods to drive them out of the country.

On another note, after the headquarters of Iran-backed parties and factions and the Iranian consulate were burned during a wave of protests in Basra this September, these factions accused the United States of standing behind these incidents.

In parallel with these events, areas close to the US Embassy in Baghdad and the consulate in Basra were attacked with mortars. The United States accused Iran-backed factions of being behind these attacks and placed the responsibility on Iran for targeting Americans in Iraq. The United States vowed to respond quickly and categorically to protect American lives.

The greatest question is on the extent to which such sanctions actually affect such armed factions. While Knights believes that the sanctions will have repercussions, Hisham al-Hashimi insists they will have no effect. He stated, “I do not believe that there will be major repercussions on the leaderships of such factions, as they have officially registered parties, important economic assets, professional media, and international relationships with Iran, Russia, China, Turkey and Qatar. They have a big audience and extend to the governmental, educational and religious institutions. This will not be undone with a simple law that could not be realistically executed.”

Despite the fact that the United States has access to many tools on the international scene that allow it to impose some restrictions on the Iraqi factions, it is unlikely that these steps will succeed in drastically distancing these factions from the political arena.