Iraq's new government is taking a series of decisions to rein in Iran-backed militias. 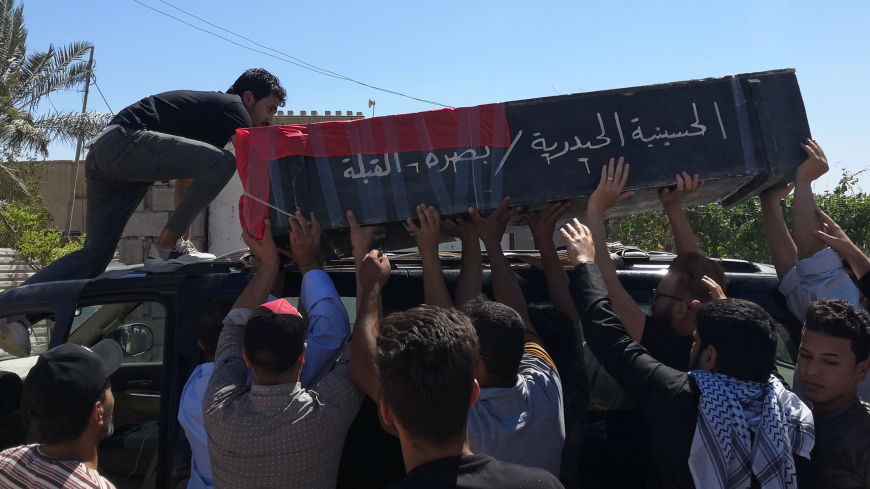 Mourners carry the coffin of an Iraqi demonstrator who was killed during ongoing anti-government protests in Basra, Iraq, May 11, 2020. - REUTERS

Iraqi police in the southern province of Basra stormed the office of the Thar Allah al-Islami militia Monday and arrested all the members in the office, including its leader, Yusif Sanawi. Militia members were accused of shooting protesters from their office on Sunday.

Thar Allah was established in 1995 and was active against Saddam Hussein. It was a part of a sectarian war in southern Iraq after Saddam was ousted in 2003. The militia was dismantled and Sanawi was arrested in the Battle of Basra military campaign under then Prime Minister Nouri Maliki in 2008. But Sanawi was able to escape to Iran, where he stayed for years, before he returned and reactivated the militia in 2014. Sanawi formed a political wing and participated in the 2018 election but did not win any seats.

The office of new Prime Minister Mustafa al-Kadhimi later announced that he had ordered the attack on the Thar Allah militia. “With direct oversight by Commander-in-Chief PM @MAKadhimi, Iraqi security forces today conducted a dawn raid on a building in Basra Province from which bullets were fired earlier at demonstrators, killing one protestor and injuring others,” his Twitter account said.

“The security forces arrested all those inside the building and confiscated their weapons and ammunitions. Those detained have been referred to the judiciary,” it added.

In his first Cabinet meeting, Kadhimi ordered the release of all protesters arrested during the last few months and formed a special committee to identify the militias that have shot and abducted protesters. He returned Lt. Gen. Abdul-Wahab al-Saadi to the Special Counterterrorism Force and made him head of the force. Saadi's removal last year by then Prime Minister Adel Abdul Mahdi triggered the mass protest movement that began in October.

In his government plan approved by the parliament, Kadimi put “restricting the arms to the state” at the top of his priorities, promising to identify, prosecute and try all militias involved in violent attacks against the protesters during the last seven months.

Kadhimi’s first priority is clearly national security, and an essential part of this is stopping foreign intervention in Iraqi state affairs. Iraq had become a battleground between the United States and Iran, and the latter had been using its militias to attack US bases and interests.

The new prime minister’s message in the abovementioned decisions and actions is that he is serious about enforcing Iraqi sovereignty, and that foreign intervention in Iraq would not be allowed.

In the section about sovereignty in his government plan, he emphasized the principle of reciprocity with all countries, in which “no regional and international conflict should occur in Iraq”

His plan is a benchmark for the Iran’s Islamic Republic Guards Corps (IRGC) Quds Force, as well as others who may want to interfere in Iraqi affairs.

The killing of Iranian Quds Force commander Qasem Soleimani and Popular Mobilization Units (PMU) leader Abu Mahdi al-Muhandis by the US in January may have set back Iran’s influence in Iraq.

Last month, four PMU factions known to be close to top Iraqi Shiite cleric Ayatollah Ali Sistani left the PMU and asked to be integrated into the Iraqi state forces. Iran attempted to change their decision but has been unsuccessful.

Some other PMU factions, including groups close to Iran, have been trying to send a positive message to Washington, asking the United States to help Iraq overcome its economic and security challenges. The head of the Badr Organization bloc in the parliament, Muhammad al-Ghabban, asked the United States to give priority to Iraq to provide all possible help to overcome the country's challenges.

Meanwhile, Iranian Supreme Leader Ayatollah Ali Khamenei has issued a tweet that some saw as a sign of willingness to calm the conflict with the United States and reduce tension in the region. Khamenei praised the second Shiite imam, Hassan, for his “brave action” involving early caliphates, adding, “Due to his actions, #Islam remained as a religion that is against oppression, and is uncompromising, undistorted and genuine.”

The appointment of Kadhimi, which was also supported by pro-Iran forces in Iraq, as well as by Tehran, is a clear sign of a change in policy in Iraq where the Quds Force has no pretensions of being in charge of Iraq and in which relations with Iraq instead would be dealt with based on mutual respect and reciprocity.