Demonstrators across Iraq acknowledge the steps taken by the new government to meet their demands, but the massive street protests have resumed with new energy. 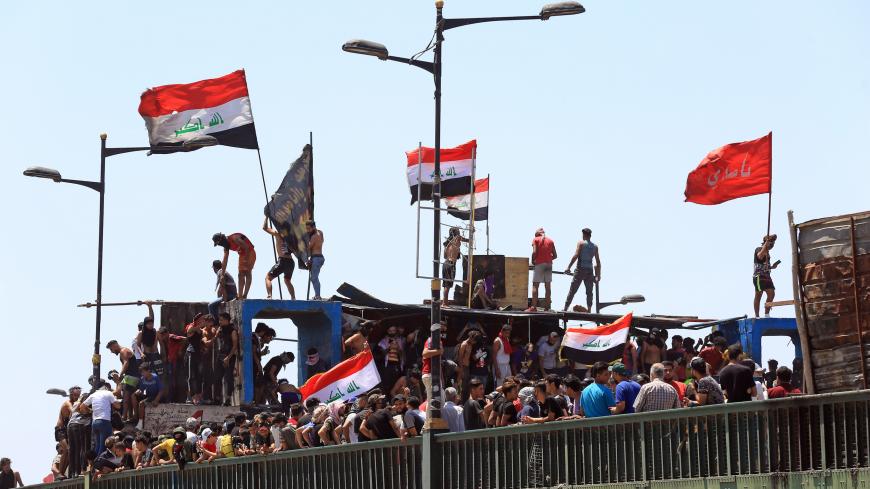 Iraqi security forces use tear gas and water cannons against protesters during a demonstration after a break due to novel coronavirus measures, at Tahrir Square in Baghdad, Iraq, May 10, 2020. - Murtadha Al-Sudani/Anadolu Agency via Getty Images

BAGHDAD, Iraq — After about two months of quiet due to pandemic concerns, Iraqi protesters returned to the streets soon after the formation of the new government.

The protests that erupted last year in October resulted in Adil Abdul Mahdi’s resignation and withdrawal of the last two prime ministers. After the approval of Mustafa al-Kadhimi’s government, the new prime minister announced plans to tackle corruption and address the protesters' demands.

Baghdad, Wasit, Dhi Qar, Al-Muthanna, Babel, Al-Qadisiyyah and Karbala provinces have been rocked by protests since last week. There have been several clashes between the protesters and the security forces. On May. 18, four activists were arrested in Diwaniya, the capital of Al-Qadisiyyah. Security forces also attacked protesters at the Ahdab oil field in Wasit province, burning their tents and damaging their vehicles. On May. 19, security forces fired live ammunition at protesters in Diwaniya, killing at leat one and injuring many others.

Protesters still complain about activists and paramedics being abducted. Prominent activist Haidar al-Lami was abducted on May. 18 when he was returning to Tahrir Square in Baghdad. Though those arrested and abducted were released by direct order from the prime minister, the protesters have not only reduced their activities but have stepped up the protests and raised their demands.

As summer approaches, the protests are expanding in the southern provinces over a lack of electricity and clean water. Hundreds of protesters gathered May. 16 in front of the governor's office in Basra, which has suffered salinity problems for last few years.

Although Kahdimi has mapped out an ambitious reform program and has reached out directly to the protesters, some have adopted a wait-and-see attitude, skeptical of any action by the ruling elite.

Protest coordinators have given the new government a month to prosecute those behind the killing and wounding of thousands of protesters. Baghdad protest coordinator Zulfiqar Hussain told Al-Monitor, "The demonstrations are continuing and there will be a new wave of them after the upcoming Eid al-Fitr holiday. The first demand will be the trial of Abdul-Mahdi along with early elections, a fair electoral law, the formation of a fair election commission and the prosecution of corrupt politicians."

Kadimi has taken a series of measures in response to the protesters' demands designed to give him time to implement his reform plans.

He ordered the detained protesters released in line with the Iraqi Constitution, which ensures the right to protest. Kadhimi also vowed to “hold those who shed Iraqi blood accountable” in reference to the protesters killed during the demonstrations, and to compensate their losses.

By the order of the prime minister, security forces raided the headquarters of the Iran-backed militia Thaar Allah in Basra after some demonstrators were shot from the office.

Last week, assassinated Iranian commander Qasem Soleimani’s portrait was removed from its hanging place near Baghdad's international airport. Protesters were chanting against Soleimani, accusing him of being behind the militia attacks against the protesters last year. Soleimani was killed in a drone attack by the United States early this year.

Upon taking office, Kadhimi promoted Lt.-Gen. Abdul Wahab al-Saadi to head counter-terrorism operations who is a popular and admired figure among the Iraqi public for his work in defeating the Islamic State. Saadi was demoted without cause last year by the previous government to heavy criticism from the public. Kadhimi's promotion of Saadi is seen as an effort to please the demonstrations.

The new government has sent out representatives to speak to the protesters. Hisham Daoud, who was Kadimi's candidate for culture minister but was rejected by the parliament, was sent to Kut, the capital of Wasit province.

However, none of these efforts bore any fruit in calming the streets. Kadhimi’s appointment not only failed to send the protesters home but increased their activities and demands.

Concern is growing among the protesters that Kadhimi’s measures are just symbolic gestures to improve the government's image and are doing too little to address their demands.

Al-Monitor spoke to Ahmed Hassan, a civil activist, journalist and member of the protest coordination committee.

“The protesters wish to see certain militias and groups repeatedly attacking protesters to be prosecuted, an investigation of the corrupt politicians, for the parliament to be pushed to legislate reforms on the electoral system and the appointment of an impartial electoral commission committee,” Hassan said, adding, “The protesters are not against Kadimi’s government, but they want a real and complete response to their demands.”

Although the raid on Thaar Allah's headquarters in Basra was received positively by the protesters, other militias are still making the streets unsafe. Hassan emphasized that Kadimi must take stronger action against them.

Kadimi visited leaders of the Popular Mobilization Units last week to build a relationship with them and further his agenda. He is in a difficult situation, as he must satisfy both the protesters and the PMU and gain their trust.

Kadhimi ordered the formation of a youth council of protest leaders to keep regular contact with. However, Hassan believes the council has yet to be formed and feels the move could just be for show.

Hassan praised Kadimi’s decision to reach out to the protesters via representatives and considers Daoud the perfect candidate to speak with them. He suggested, however, “Kadimi must be honest and straightforward on what he is able to achieve and avoid making empty promises that he is not able to deliver, as was done by his predecessors.” He pointed out, “The protesters are aware of Kadimi’s limited power.”

However, some of the protesters' recent demands seem unrealistic. For example, the protesters in the southern provinces have been asking for the removal of their governors, but only the provincial councils hold that authority.

Kadimi wrote about the challenges he is facing in a local Iraqi newspaper in an effort to communicate directly with the protesters, but the streets continue to roil.

Hassan pointed out, “There are groups of protesters exploited by Kadimi’s rival political parties and militias who are trying to block Kadhimi’s agenda. This groups are well known and avoided by the general public, and most of the property vandalism has been committed by them.” He pointed to Harakat Bishayir al-Khayr in particular, which is close to former Prime Minister Nouri al-Maliki. Maliki was against Kadimi’s appointment and his State of Law Coalition voted against him.

The above show that the protests could remain a serious challenge for Kadimi and an obstacle his reform plans. Change often takes time. Kadhimi needs time to enact reforms, and the protesters feel that time is not on their side.