The spokesman for the Defense Ministry said the suspect killed an anti-government protester in Baghdad. 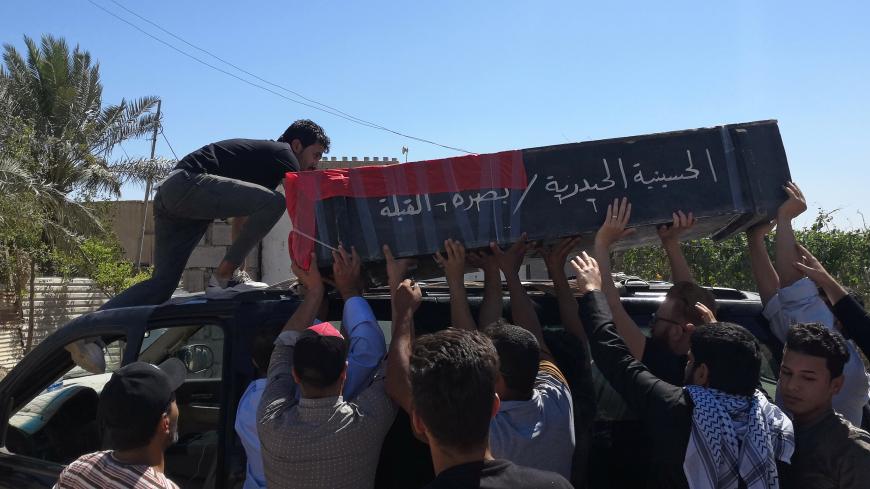 Mourners carry the coffin of an Iraqi demonstrator who was killed during ongoing anti-government protests in Basra, Iraq, May 11, 2020. - REUTERS/Stringer

Iraq’s new government has made an arrest in connection with the deadly crackdown on anti-government protests that erupted across the country in 2019.

Defense Ministry Spokesman Yehia Rasool confirmed to Al-Monitor that the suspect, identified only as Al Jurithi, is suspected of killing a protester in Baghdad and threatening others. He also confessed to rioting, burning property and striking security forces, and he was arrested under the direction of new Prime Minister Mustafa al-Kadhimi.

In documenting the deaths of 490 protesters, the United Nations wrote in a report last month that the “absence of accountability for these acts continues to contribute to the pervasive environment of impunity.” The UN also reported 33 activists were assassinated and at least 99 people had been abducted.

The widespread protests prompted the resignation of Prime Minister Adel Abdul-Mahdi in late November 2019. Some five months later, Kadhimi was sworn in as his successor, bringing an end to the political deadlock.

Kadhimi, the country’s former intelligence chief, has vowed to provide accountability and to compensate the families of the protesters killed or wounded by security forces. He also ordered the release of all detained demonstrators who weren’t being held for causing injury or death.

In May, demonstrators returned to the streets of Iraq’s major cities for the first time since coronavirus movement restrictions were put in place two months prior. With the arrival of summer, protesters in the southern provinces are demanding accountability for a lack of electricity and clean water.

Last month, security forces acting on Kadhimi’s order raided the headquarters of the Iran-aligned militia Thaar Allah in Basra and arrested at least five men accused of firing at protesters the day before.

“I promised that those who have spilled Iraqi blood will not be allowed to rest, and we are honoring that promise,” Kadhimi said of the arrests.