The prime minister said security forces have 72 hours to finish their investigation into the protester deaths. 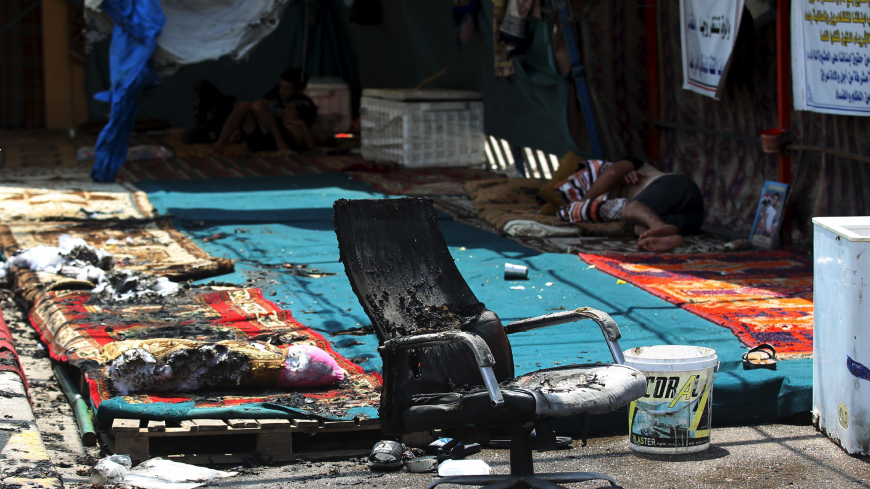 Two Iraqis are pictured on July 27, 2020, at the spot where a protest tent was burned the previous night in Baghdad's Tahrir Square. Two demonstrators died in Baghdad overnight after being shot in confrontations with security forces, the first victims of protest-related violence under a new Iraqi premier who had promised a dialogue with activists. - AHMAD AL-RUBAYE/AFP via Getty Images

Crowds at the Sunday demonstration, which started in the capital’s Tahrir Square and continued to nearby Tayaran Square, protested ongoing electricity shortages, according to Reuters. A security force told the news agency that as security forces fired tear gas, protesters responded with stones and petrol bombs.

Iraqi security forces have "72 hours to reveal the results and outcomes of the investigations of the Sunday night incident," said Kadhimi on state television Monday, according to Rudaw.

Kadhimi, who assumed the role of prime minister in April after five months of political deadlock, has vowed justice for those killed or wounded by security forces during the sweeping anti-government protests that erupted in October 2019.

Human rights groups accused security forces of using violent tactics to suppress the unrest, including firing live ammunition at peaceful protesters. The United Nations mission in Iraq documented the deaths of 490 protesters and the injury of 7,783 others at demonstrations between October and March.

In a Twitter statement, Iraq's military spokesman Yahya Rasool said an investigation into the two latest protester deaths is ongoing, adding that security forces were under orders not to use force unless absolutely necessary.

“The protesters are our brothers and our sons, just as the security forces charged with protecting them,” he said Sunday. “Attacks on either side are something we will investigate.”