The Interior Ministry also announced the arrest of three members of the Iraqi security forces it said were responsible for two protester deaths overnight Sunday. 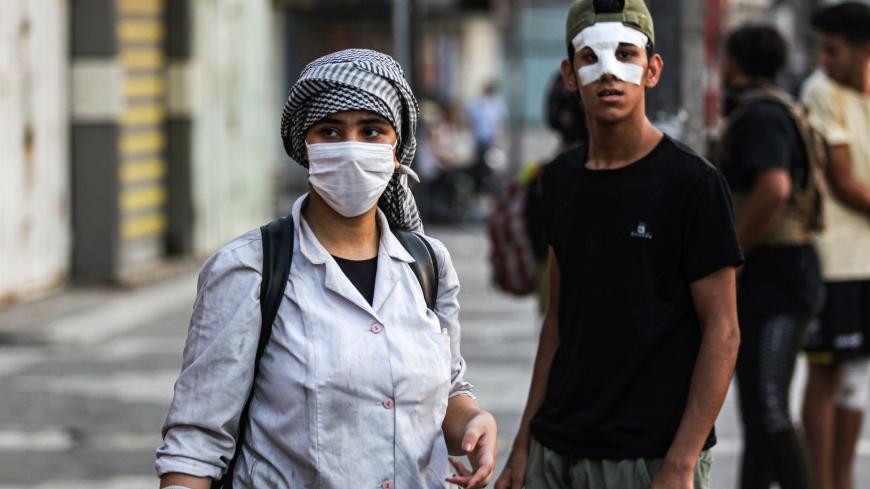 A female protester wearing a mask due to the COVID-19 pandemic stands with a male protester at a makeshift roadblock in Tayaran Square in the center of the Iraqi capital, Baghdad, on July 28, 2020, amid ongoing anti-government protests due to poor public services. - AHMAD AL-RUBAYE/AFP via Getty Images

Iraqi Prime Minister Mustafa al-Kadhimi’s government said today that it would be considering the nearly 560 demonstrators and security personnel killed during mass protests as “martyrs” and that their families would be eligible to receive 10 million dinars ($8,380) in compensation.

The widespread protests, which erupted in October and called for an end to growing Iranian influence, government corruption and a lack of basic services, forced the resignation of then-Prime Minister Adel Abdul Mahdi. Human rights groups accused security forces of using violent tactics to suppress the unrest, including firing live ammunition at peaceful protesters.

“Our brave security forces protect Iraqi lives, and wrongdoers don’t represent them. Our people are our strength,” Kadhimi said on Twitter today.

Kadhimi, who assumed the role of prime minister after five months of political deadlock, has vowed justice for those killed or wounded by security forces. His government’s official death count isn’t far off from what the United Nations and rights groups have counted. The United Nations mission in Iraq documented the deaths of 490 demonstrators and the injury of 7,783 others between October and March.

Iraqis have increasingly taken to the streets demanding an end to electricity cuts amid the scorching summer weather. At 125.2 degrees Fahrenheit (51.8 Celsius), Baghdad on Tuesday registered its highest temperature ever recorded.

Today, the Interior Ministry released the findings into an investigation of two protester deaths overnight Sunday in central Baghdad, where protests have been taking place at Tayaran and Tahrir squares. During a press conference, Interior Minister Othman al-Ghanimi said three members of the security forces had been arrested after witness and forensic reports showed they used hunting rifles to fire on the protesters.

The UN mission in Iraq welcomed efforts to investigate while condemning the latest round of violence. “Iraqis are in a difficult place facing many challenges. Their right to peaceful protest must be protected unconditionally,” the mission said Monday on Twitter.