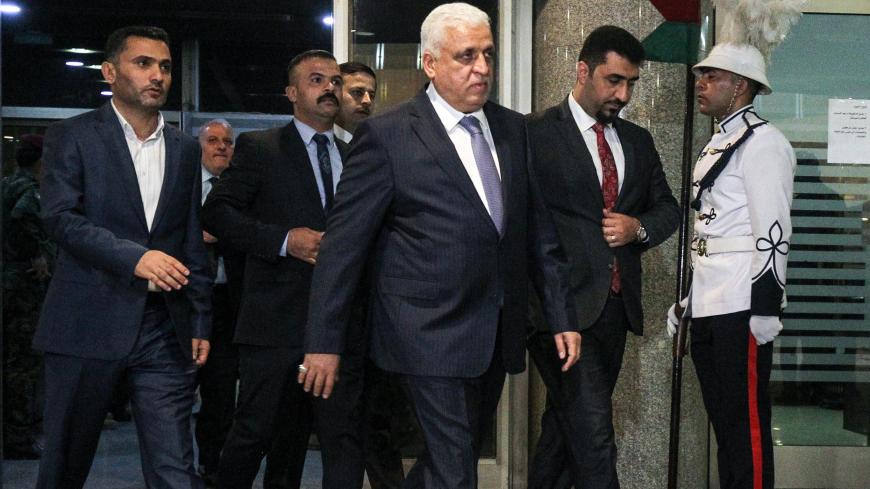 Falih al-Fayadh, then a candidate for Iraq's interior minister, arrives at the parliament in the capital Baghdad Oct. 24, 2018, prior to a vote on the proposed cabinet. - AHMAD AL-RUBAYE/AFP via Getty Images

The US Treasury Department announced sanctions today against Falih al-Fayadh, the chair of Iraq’s Popular Mobilization Units (known variously as Hashd al-Shaabi, PMU and PMC), for his alleged role in violent repression of anti-corruption protests in 2019.

Fayadh “was the head of the PMC when its forces fired live ammunition at protesters resulting in the deaths of Iraqi civilians,” Pompeo said.

In a separate statement, US Treasury Secretary Steven Mnuchin accused Fayadh of “directing and supervising the murder of peaceful Iraqi demonstrators” and “waging a violent campaign against Iraqi democracy and civil society.”

Fayadh has been sanctioned under an executive order building on the Global Magnitsky Act, which allows the United States to sanction figures abroad accused of human rights abuses.

Kadhimi replaced Fayadh as head of the country’s National Security Agency in July 2020 amid a US-backed push to isolate the influence of the PMU and Iran-linked figures, but he has remained chair of the PMU.

On Friday the United States accused Fayadh of being a member of “crisis cells” supported by the elite Quds Force of Iran’s Islamic Revolutionary Guard Corps, along with Qais al-Khazali and Hussein Falah al-Lami, both of whom were previously sanctioned.

Last year the Trump administration slapped a terrorist designation on Khazali, who founded the Iran-backed Asaib Ahl al-Haqq and played a leading role in the violent insurgency against the US occupation of Iraq.